US forest industry performance in December and January was recently reported by both the US government and the Institute for Supply Management.

Total industrial production (IP) increased by 0.3 percent in December after rising 0.4 percent in November (originally +0.6 percent). For 4Q as a whole, total IP moved up at an annual rate of 3.8 percent. In December, manufacturing output increased 1.1 percent, its largest gain since February 2018. The output of mines rose 1.5 percent, but the index for utilities fell 6.3 percent, as warmer-than-usual temperatures lowered the demand for heating. Total IP was 4.0 percent higher in December than a year earlier.

Manufacturing capacity expanded by 1.5 percent over the course of 2018, whereas capacity utilization rose by 1.9 percent. Wood products added capacity but utilization waned at year end. Paper capacity, by contrast, continued to fall out—especially in the newsprint and office paper segments.

After being a relative bright spot in the US economy during 2018, anecdotal evidence suggests decelerating growth in factory activity—particularly in the auto and energy sectors. With uncertainty augmented by the political angst emanating from Washington DC, it is difficult to predict how ephemeral the manufacturing slowdown might prove to be. Pantheon Macroeconomics’ Ian Shepherdson thinks “manufacturing strength won’t be sustained” because of trade tariffs, the strong greenback and slowing investment demand. 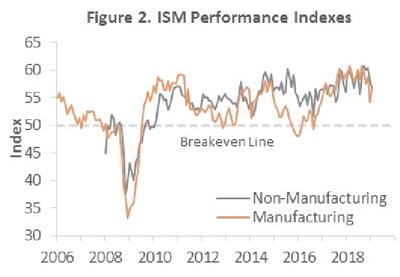 The Institute for Supply Management’s (ISM) monthly sentiment survey showed that in January the expansion in U.S. manufacturing accelerated. The PMI registered 56.6 percent, up 2.3 percentage points (PP) from the December reading. The increases in the new orders (+6.9PP) and production (+6.0PP) sub-indexes were noteworthy. The pace of growth in the non-manufacturing sector decelerated (-1.3PP), however, to 56.7 percent. The export orders sub-index tumbled by 9.0PP while new orders retreated by 5.0PP.

Of the industries we track, only Real Estate and Construction expanded. IHS Markit’s January survey headlines generally paralleled those of ISM. “The robust economic growth signaled by the U.S. [manufacturing and services] surveys at the start of the year sits in stark contrast to the near-stalling of growth seen in Europe, China and Japan,” wrote Chris Williamson, Markit’s chief business economist. “At current levels, the surveys are consistent with annualized 1Q GDP growth of around 2.5 percent.”

“[A]lthough still robust, the rates of economic growth, job creation and inflation signaled by the surveys have cooled since peaks seen last year,” Williamson continued. “This possibly reflects some impact from the government shutdown, though scant evidence of such was seen in the anecdotal evidence from the surveys, but also reflects an easing of demand growth, notably from abroad. Foreign sales of goods and services barely rose in January, contrasting with signs of faster growth of domestic orders.”

The consumer price index (CPI) declined for the first time in nine months in December (-0.1 percent MoM; +1.9 percent YoY) as a 7.5 percent decrease in the gasoline index more than offset increases in several indexes including shelter (+0.3 percent), food (+0.4 percent), and other energy components. The so-called “core” CPI, which excludes food and energy, increased 0.2 percent (+2.2 percent YoY).

Meanwhile, the producer price index (PPI) fell 0.2 percent (+2.5 percent YoY). Roughly 80 percent of the decrease in the final-demand index was attributable to a 0.4 percent decline in prices for goods, led by a 13.1 percent drop in wholesale gasoline prices. The index for final demand services (particularly food retailing) edged down 0.1 percent.

US forest industry
US Manufacturing, Forest Industry Slam on Brakes in April
US forest industry performance in March and April was recently reported by both the US government and the Institute...
END_OF_DOCUMENT_TOKEN_TO_BE_REPLACED