Total industrial production (IP) was unchanged in June, as increases in both manufacturing and mining offset a retreat in utilities; total IP in June was 1.3 percent higher than a year earlier. For 2Q as a whole, however, total IP declined at an annual rate of 1.2 percent, its second consecutive quarterly decrease.

Manufacturing output advanced 0.4 percent in June. An increase of nearly 3 percent for motor vehicles and parts contributed significantly to the gain in factory production—and may explain some of the contribution to 2Q GDP despite the lack of activity at auto dealerships; i.e., auto production is outpacing demand. Excluding motor vehicles and parts, manufacturing moved up 0.2 percent. 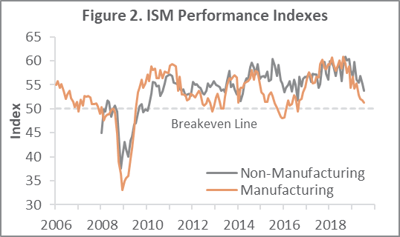 The Institute for Supply Management’s (ISM) July survey reflected continued deceleration in US manufacturing—to its slowest expansion since August 2016. The PMI registered 51.2 percent, down 0.5PP from the June reading. The drop in order backlogs (-4.3PP) overwhelmed the modest rise in new orders (+0.8PP). The pace of growth in the non-manufacturing sector also decelerated (-1.4PP, to 53.7 percent) to its slowest rate since August 2016. Although the service-industry inventories index dropped to the breakeven 50 percent, inventories are nonetheless increasingly seen as still too high.

Of the industries we track, Paper Products and Ag & Forestry contracted (Table 4). “Tariffs continue to push costs higher,” observed one Construction respondent, “and customers are looking for more discounts due to mortgage-rate fluctuations.”

IHS Markit’s July survey headlines were mixed relative to those of ISM. “The PMIs for manufacturing and services collectively point to GDP expanding at an annualized rate of under 2 percent in July,” wrote Markit’s Chris Williamson. “A sharp drop in future expectations... suggests downside risks have increased in the near-term at least, hinting that the upturn in growth seen in July could prove short-lived and that GDP growth could remain disappointingly modest in 3Q.”