“Investment spending has been a clear victim of the uncertainty generated by the trade war since mid-2018, and that continued through the end of 2018,” said Jefferies’ Thomas Simons. “2019 is getting off to a better start, but there is still so much uncertainty surrounding the trade war that there are certainly downside risks ahead.” 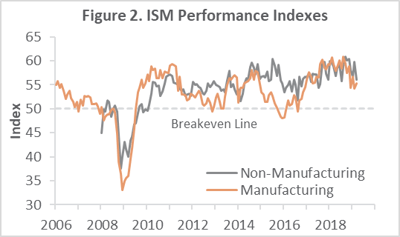 The Institute for Supply Management’s (ISM) sentiment survey for March showed the expansion in US manufacturing accelerating slightly (+1.1PP), to 55.3 percent. Increases in employment (+5.2PP) and input-price (+4.9PP) indexes were particularly noteworthy (Table 4). The pace of growth in the non-manufacturing sector decelerated (-3.6PP) to 56.1 percent. The drop in new orders (-6.2PP) and jump in input prices (+4.3PP) were significant. Of all the industries we track, only Paper Products contracted.

IHS Markit’s March survey headlines diverged from their ISM counterparts, which supports the conflicting-views point made above. “For 1Q as a whole, [Markit’s] surveys are consistent with the economy growing at an annualized rate of approximately 2.5 percent,” wrote Markit’s Chris Williamson, “painting a relatively rosy picture compared to official data.

Williamson is not entirely sanguine about the future, however. “Dig deeper and the picture darkens,” he continued. “Inflows of new work have moderated markedly compared to this time last year as manufacturing weakness and growing concerns about the economic outlook have increasingly spread to the service sector. Business optimism about the year ahead is now the lowest for two and a half years, posing downside risks to growth in coming months.”

Meanwhile, the producer price index (PPI) edged up 0.1 percent (+1.9 percent YoY), the outcome of a 0.4 percent rise in prices for final demand goods (largely attributable to a 3.3 percent jump in the gasoline index) and an unchanged index for final demand services.

US forest industry
CPI & Forest Products Sector PPI Continue to Expand
US forest industry performance in February and March was recently reported by both the US government and the Institute...
END_OF_DOCUMENT_TOKEN_TO_BE_REPLACED