US Forest Industry Performance: May 2017

For longer-term perspectives, Wood Products output has been oscillating in a fairly consistent band around a noticeable upward trend since mid-2009 despite capacity utilization (CU) decelerating since early 2013 and capacity growth flattening after 2014. By contrast, Paper output appears to be holding its own after slumping between 2Q2015 and 3Q2016; with production holding steady, CU of remaining mills keeps inching up in the face of falling capacity.

“Soft” (i.e., opinion-based) survey data from the Institute for Supply Management (ISM) showed that the expansion in US manufacturing was essentially stable in May. The PMI registered 54.9 percent, +0.1 PP from April. Four of the sub-indexes (new orders, employment, and both inventory categories) had higher values, while six had lower values. 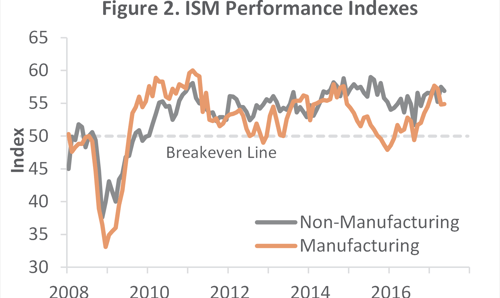 Broad-based increases in the indexes for shelter, energy, tobacco and food helped push the consumer price index (CPI) up by 0.2 percent MoM and 2.2 percent YoY in April. While a smaller increase than March’s 2.4 percent YoY rise, it was greater than the 1.7 percent average annual increase of the past decade. The energy index rose 9.3 percent YoY; rent: +3.8 percent and medical care: +3.1 percent.

The producer price index (PPI) advanced 0.5 percent in April. Almost two-thirds of that increase is attributable to prices for final demand services (especially those of securities brokerage, dealing, investment advice, and related services—which rose as affected companies began the process of complying with the Department of Labor’s new Fiduciary Rule). The final demand index rose 2.5 percent for the 12 months ended April 2017, the largest YoY increase since February 2012’s 2.8 percent.

US forest industry
CPI & Forest Products Sector PPI Continue to Expand
US forest industry performance in February and March was recently reported by both the US government and the Institute...
END_OF_DOCUMENT_TOKEN_TO_BE_REPLACED