Total industrial production (IP) increased 0.3 percent in September (+5.1 percent YoY), about the same MoM rate of change as in the previous two months. Hurricane Florence reduced output by less than 0.1PP. For 3Q as a whole, total IP advanced at an annual rate of 3.3 percent, down from 2Q’s +5.3 percent. Manufacturing output tiptoed higher (0.2 percent) in September, the smallest gain in four months. Utilities were unchanged, while the index for mining rose (+0.5 percent) for an eighth month.

New orders expanded by 0.7 percent (+6.9 percent YoY) in September, led by transportation equipment. Excluding transportation, new orders advanced by 0.4 percent (+5.9 percent YoY). Business investment spending shrank by 0.1 percent (+1.1 percent YoY, a mere shadow of the +10.3 percent YoY rate just two months earlier). “In short, the industrial recovery continues, but it would be a stretch to call it a boom outside the oil and gas sectors,” said Ian Shepherdson, chief economist at Pantheon Macroeconomics. 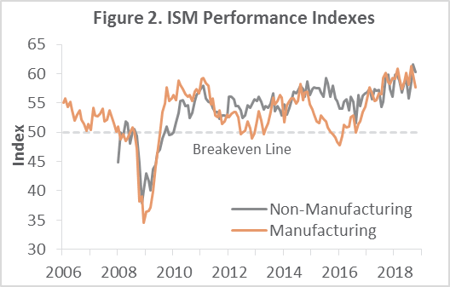 The consumer price index (CPI) ticked up by 0.1 percent in September (+2.3 percent YoY), thanks to a rise in the shelter index (+0.2 percent) that accounted for over half the MoM increase in the all-items index. The energy index declined 0.5 percent while the food index was unchanged.

The producer price index (PPI) increased 0.2 percent (+2.6 percent YoY), attributable to a 0.3 percent advance in prices for services (mainly airline passenger services). In contrast, the index for goods decreased (-0.1 percent) for the first time since May 2017 on a 3.5 percent slide in the gasoline index. “This latest inflation data corroborates our view that the Fed is likely to move ahead with another rate hike in December, bringing this year’s total to four,” economists at Oxford Economics wrote.

US forest industry
US Labor Market Wraps Up 2019 With a Bang
Every month, Forest2Market publishes updated forecasting products designed specifically for participants in the...
END_OF_DOCUMENT_TOKEN_TO_BE_REPLACED