Total industrial production (IP) declined 0.9 percent MoM in August (+1.5 percent YoY) following six consecutive monthly gains. The Federal Reserve estimates that Hurricane Harvey accentuated the decline in total output by roughly 0.75 PP (i.e. without Harvey, total IP would have slid by only 0.15 percent.)  The index for manufacturing decreased by 0.3 percent, with Harvey knocking factory output by an estimated 0.75 PP; i.e., manufacturing would have risen by 0.45 PP had Harvey not occurred. Petroleum refining, organic chemicals, and plastics materials and resins were among the manufacturing industries most affected by the storm.

The Institute for Supply Management’s (ISM) monthly sentiment survey suggested that the expansion in US manufacturing accelerated in September. The PMI registered 60.8 percent (the highest reading since May 2004), up 2.0 PP. (50 percent is the breakpoint between contraction and expansion.) Only the producer-inventories and imports sub-index values were lower in September than in August.

The pace of growth in the non-manufacturing sector also accelerated (+4.5 PP) to 59.8 percent, the highest NMI reading since that index began in 2008. The only sub-index of economic consequence with a noticeably lower value in September was inventories.

Of the industries we track, only Ag & Forestry contracted. 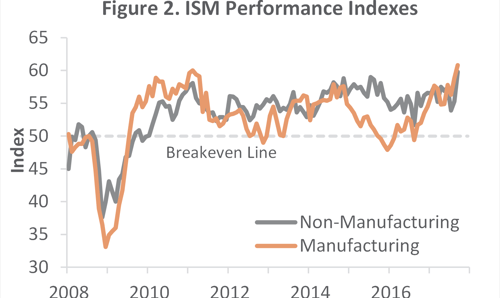 Meanwhile, the producer price index (PPI) advanced 0.2 percent (+2.4 percent YoY). Three-quarters of the August increase in final demand prices was attributable to the index for final demand goods (+0.5 percent) which, in turn, was dominated by a 9.5 percent jump in the gasoline index.

Of the individual forest products-related indexes we track, only Pulp, Paper & Allied Products bucked the trend. Forest products PPIs were:

US forest industry
Strategic Planning During Downturns with Precise Market Data
It’s difficult to overstate the uniqueness of the current global health (and economic) crisis we find ourselves in....
END_OF_DOCUMENT_TOKEN_TO_BE_REPLACED