US Housing Starts Inch Down in April; ‘Demographic Tailwind’ at Risk

US housing starts were down in April, suggesting that factors such as rising materials and labor costs are restricting new residential construction despite solid demand. These concerns continue to pose challenges to home builders seeking to meet demand and keep escalating housing prices in check.

After inching up 1.9 percent in March, US housing starts decreased 3.7 percent in April to a seasonally adjusted annual rate (SAAR) of 1,287,000 units. Single-family starts accounted for 894,000 units, which is 0.1 percent above the revised March figure of 893,000. Starts for the volatile multi-family segment dropped 11.3 percent to a rate of 393,000 units in April.

Privately-owned housing authorizations dropped 1.8 percent to a rate of 1,352,000 units in April. Single-family authorizations ticked up to 859,000, which is 0.9 percent above the revised March figure.

Privately-owned housing completions increased to a SAAR of 1,257,000 in April, up 2.8 percent from March’s revised estimate of 1,223,000 and 14.8 percent above April 2017. Regional performance in March was mixed as confirmed by the US Census Bureau report, although the Midwest experienced significant month-over-month volatility. Seasonally-adjusted total housing starts by region included:

The 30-year fixed mortgage rate increased from 4.44 to 4.47 percent in March, its highest level since September 2013. The National Association of Home Builders (NAHB)/Wells Fargo builder sentiment index was up one point to 70 in early may; this is the fourth time the index has reached 70 or higher this year. 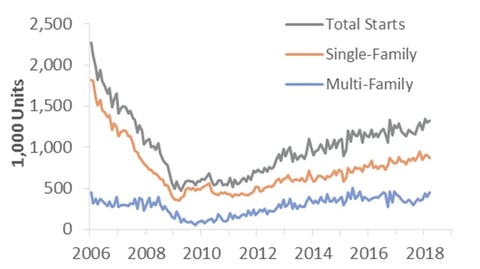 Some of the regional disparity in performance could be due to atypical snow and weather patterns, said Scott Volling, principal at PricewaterhouseCoopers. “But, if you take a step back and look at a more macro level, the quote I hear most often from builders is, ‘we can’t outbuild our labor.’ They may have lots ready to go, and there may be demand out there, but they can’t go any faster than their labor pool allows them to,” Volling added.

Rising material costs also threaten the momentum of single-family home construction; lumber costs have risen significantly since the beginning of 2017, adding roughly $7,000 to the cost of building a home, per Robert Dietz, chief economist at the NAHB. Dietz added that single-family building has proven “remarkably resilient” to rising interest rates and higher construction costs. That said, there will come a point at which the market will resettle.

Other trends and dynamics are at work within the larger housing market, as recently reported by Delphi Advisors in Forest2Market’s Economic Outlook:

Two key items to watch in the near term: interest rates and housing costs. If either increases too far beyond current levels and, most importantly, if home builders continue to focus only on the more expensive segments of the market, a potential affordability crisis awaits. The combined effects of which will simply overwhelm the increasing number of millennials who have been propping up the market, resulting in a demographic headwind that will likely cause the market to decline as a result.

Housing Market
May Housing Starts Rebound; Have We Hit Bottom?
After plunging two consecutive months (30 percent in April alone) to the lowest level since early 2015, US...
END_OF_DOCUMENT_TOKEN_TO_BE_REPLACED

Housing Market
Australia’s April Housing Approvals Push the Cliff Further Into 2020
Expectations of a massive decline in dwelling approvals in April moved out another month, as seasonally adjusted...
END_OF_DOCUMENT_TOKEN_TO_BE_REPLACED

Housing Market
April Housing Starts Plunge 30%; Is the Bottom Within Sight?
After tumbling over 18 percent in March, US housing starts plummeted another 30 percent in April to the lowest level...
END_OF_DOCUMENT_TOKEN_TO_BE_REPLACED