US Housing Starts Inch Down in April; Market Remains Flat in 2017

Despite flourishing stock indices and positive GDP forecasts for 2Q2017, US home construction fell unexpectedly in April to its lowest level in five months, hinting at a potential slowdown in the housing market recovery. April's numbers were the lowest since November 2016, which came on the heels of a downwardly-revised rate in March. That said, April’s hiccup was only slight, and there is plenty of time to make up ground as warm building weather rapidly approaches.

US housing starts were down 2.6 percent to a seasonally adjusted annual rate (SAAR) of 1,172,000 units in April. Single-family starts accounted for 835,000 units, which is 0.4 percent above the revised March figure of 832,000. Starts for the volatile multi-family segment dropped 9.2 percent to a SAAR of 337,000 units in April, which makes four straight months of declines for this segment and suggests that rental increases have probably peaked.

Privately-owned housing completions were 8.6 percent below March’s estimate of 1,210,000 units.

The 30-year fixed mortgage rate ticked down in April from 4.2 to 4.04 percent. The National Association of Home Builders (NAHB)/Wells Fargo builder sentiment index increased to 70 from mid-April’s 68 reading. The index has been above 60 since September, 2016 and readings above 50 indicate more builders view sales conditions as favorable rather than poor.

"April's new construction numbers disappoint. All three of the major new construction [indicators]—permits, starts, and completions—fell from last month," said Ralph McLaughlin, chief economist at Trulia, an online marketplace serving the real estate industry. "The silver lining for new homebuyers is that most of the construction pullback is in the multifamily sector, where economists have been expecting an eventual slowdown given the charge of multifamily units coming out of the recession." 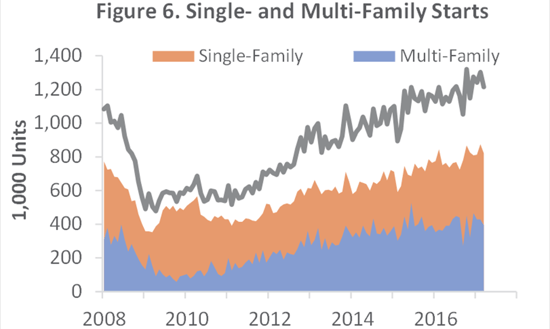 As we noted last month, US housing starts got off to a decent start in 2017 largely due to market optimism and mild weather through most of the winter months. "Much warmer-than-usual weather in the first two months of the year pulled starts forward into those months, and March—with more normal temperatures—saw the payback with declines in both single- and multifamily construction," said David Berson, chief economist at Nationwide Mutual Insurance.

But as we prepare to enter the summer months, is there cause for concern in April’s numbers?

“It’s a little bit of a concern, but these numbers do bounce around,” said Scott Brown, chief economist at Raymond James Financial Inc. “The overall trend is still higher and the backdrop for housing is still favorable.” He also echoed the sentiment that warmer weather in January and February “may have pulled some activity forward. So we’ve got to take these numbers with a grain of salt. It’s only one month.”

"Starts were widely expected to increase in April after a weather-induced decline in March," wrote David Berson, chief economist at Nationwide Mutual Insurance Co. "The recovery of housing starts has been muted thus far in this economic expansion. While starts continue to trend higher (despite April's decline), the ratio of starts to households has increased only to levels normally seen at the bottom of recessions – not eight years into an economic expansion."

The report “looks suspiciously like the start of a downward trend, but none of the other recent housing data support that conclusion,” said Ian Shepherdson, chief economist at Pantheon Macroeconomics. “At this point, then, we think it would be very premature to assume that the weakness in the latest data will persist. We expect a clear rebound over the next few months.”

What we’re likely seeing in April’s numbers is a continued settling of the segment as the weather stabilizes and the economy begins to react and feel its way through the Trump presidency. These monthly reports are prone to peaks and valleys—oftentimes much more dramatic (in both directions) than what we’ve seen so far in 2017. If anything, a tapering of the wild volatility and a trend towards some degree of equilibrium should provide an indication that the US housing market is on stable footing.

Housing Market
Housing Starts Plunge to Lowest Level in 19 Months
After jumping 12% in August due in part to strong demand from the multi-family construction sector, US housing starts...
END_OF_DOCUMENT_TOKEN_TO_BE_REPLACED

Lumber Prices
Southern Lumber Prices Continue to Inch Down
After jumping 12% in August due in large part to strong demand from the multi-family construction sector, US housing...
END_OF_DOCUMENT_TOKEN_TO_BE_REPLACED

Lumber Prices
SYP Lumber Prices Stabilize; Is More Volatility Around the Corner?
By late June, the price for finished southern yellow pine (SYP) lumber had tumbled 59% from its 2022 high mark of...
END_OF_DOCUMENT_TOKEN_TO_BE_REPLACED