US Housing Starts Jump in June

US housing starts rebounded more than expected in June after declining for three straight months. Despite the early summer rally, homebuilding has lost momentum after strong gains in both 4Q2016 and 1Q2017. Economists blame the 2Q slowdown on supply issues, noting that new construction activity remains constrained by rising lumber prices and labor and land shortages, which we also noted in last month’s coverage.

US housing starts were up 8.3 percent to a seasonally adjusted annual rate (SAAR) of 1,215,000 units in June. Single-family starts accounted for 849,000 units, which is 6.3 percent above the revised May figure of 826,000. Starts for the volatile multi-family housing segment increased 13.3 percent to a 366,000 unit-pace after five straight months of declines.

Privately-owned housing completions were 5.2 percent above May’s estimate of 1,144,000 units.

The 30-year fixed mortgage rate ticked down in June from 4.01 to 3.9 percent. The National Association of Home Builders (NAHB)/Wells Fargo builder sentiment index declined to 64 in early July, which is down two points from a downwardly revised reading of 66 in June and the lowest level since November, 2016.

Morgan Stanley economist Ted Wieseman echoed our analysis from last month about a labor and lot shortage that is affecting the entire housing market, noting that “Single-family housing starts have been running way too low as inventories of homes available for sale have fallen to what the National Association of Realtors called ‘astoundingly low’ levels during the spring selling season. Labor shortages, land shortages, regulatory bottlenecks, and, recently, rising lumber costs with the Canadian lumber tariffs have restrained new construction.”

Some of these issues may be addressed in the coming months; details are scant at this point, but there are murmurings that a potential resolution to the now-expired Softwood Lumber Agreement may be on the horizon.

New data from National Association of Realtors (NAR) shows that housing inventory also continues to shrink on an annual basis. Total available inventory at the end of May rose 2 percent to 1.96 million existing homes, which is still 8 percent lower than a year ago (2.14 million); inventory has fallen year-over-year for 24 consecutive months. Unsold inventory is currently at a 4.2-month supply at the current sales pace, which is down from 4.7 months in May of 2016.

Other data from the recent NAR report includes:

Lawrence Yun, NAR chief economist said, "Home prices keep chugging along at a pace that is not sustainable in the long run. Current demand levels indicate sales should be stronger, but it's clear some would-be buyers are having to delay or postpone their home search because low supply is leading to worsening affordability conditions."

In the last month for which the most current data is available (May), existing home sales increased to a seasonally adjusted rate of 5.62 million units—up 1 percent from April. While this segment continues its long, slow climb out of 2009’s bottom in the wake of the Great Recession, existing home sales per 1,000 households are at 86 percent of pre-recession levels. 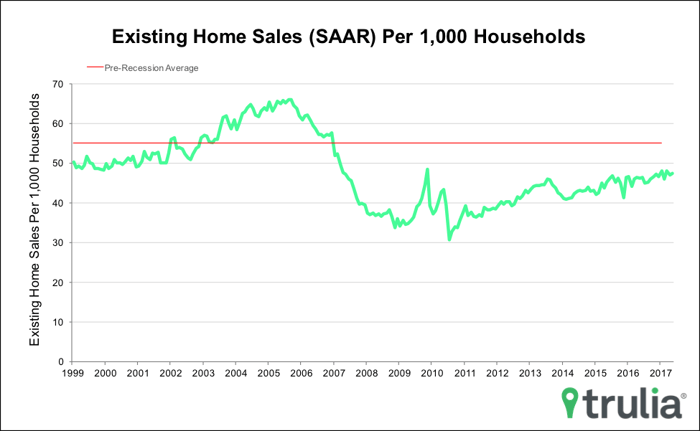 May’s new home sales recovered from April’s drop, but still have a long way to go to return to historic norms. New home sales increased to a SAAR of 610,000 in May—up 2.9 percent month-over-month and 8.9 percent year-over-year. However, new home sales per 1,000 households in May were at 5, which is roughly 69 percent of normal. Ralph McLaughlin, Chief Economist at Trulia notes that, “… we think this reflects fundamental supply, rather than demand, problems in the housing market as buyers look for an inventory relief they can get.” 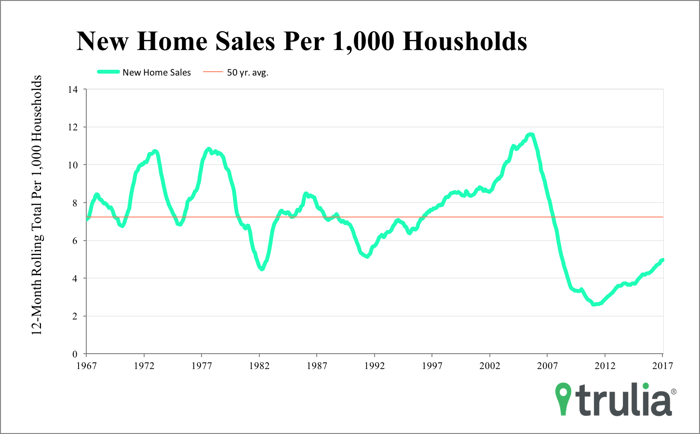 But the current supply constraint is not translating to more new homes being built at a quick pace. McLaughlin continued, “The balance between new and existing home sales continues askew with historic norms. The share of new home sales as a total of all home sales needs to about double to meet the 50-year average. This is especially telling given existing home sales themselves are well below their historic norms. In May, new home sales made up about 11% of all home sales, which is slightly more than half of the pre-recession average of 21.5%. Clearly, home buyers are being stymied not only by a shortage of existing homes, but also new ones.” 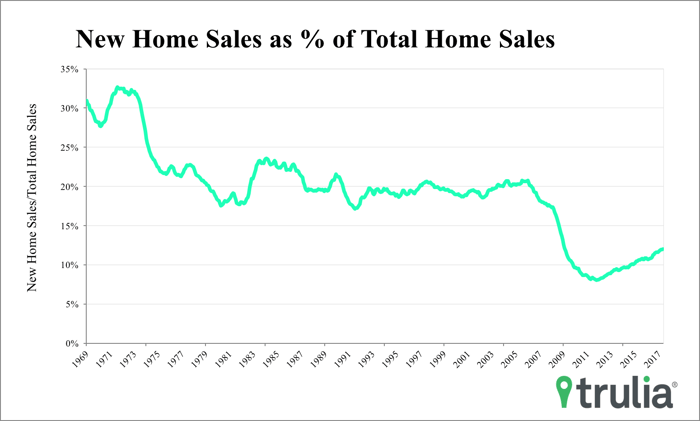 Lumber Prices
SYP Lumber Prices Stabilize; Is More Volatility Around the Corner?
By late June, the price for finished southern yellow pine (SYP) lumber had tumbled 59% from its 2022 high mark of...
END_OF_DOCUMENT_TOKEN_TO_BE_REPLACED

Housing Market
Housing Starts Tumble to Lowest Level in 17 Months
After a disappointing May and June, US housing starts continued to lose momentum in July as the housing market cools...
END_OF_DOCUMENT_TOKEN_TO_BE_REPLACED

Housing Market
Lower Housing Starts, Higher Home Prices, and Surging Inflation
After a disappointing May (-14%), US home building continued to inch down in June as the housing market cools amid...
END_OF_DOCUMENT_TOKEN_TO_BE_REPLACED