US Housing Starts Reach 11-Year High in May

US housing starts surged to an (almost) 11-year high in May—their highest level since July 2007—thanks to gains in both single-family and multi-family home construction driven by the Midwest region. However, the risk of escalating trade wars has recently spooked Wall Street as well as the housing sector; May denoted the second straight monthly drop in new building permits, which suggests that housing market activity may be flat lining.

Privately-owned housing authorizations dropped 4.6 percent to a rate of 1,301,000 units in May. Single-family authorizations fell to 844,000, which is 2.2 percent below the revised April figure.

Privately-owned housing completions increased to a SAAR of 1,291,000 in May, up 1.9 percent from April’s revised estimate of 1,267,000 and 10.4 percent above May 2017. Regional performance in May was mixed as confirmed by the US Census Bureau report, although the Midwest drove nearly all of the growth. Seasonally-adjusted total housing starts by region included: 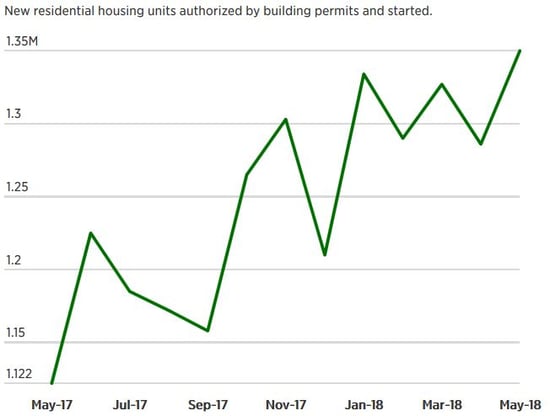 Source: US Department of Commerce

The 30-year fixed mortgage rate increased from 4.47 to 4.59 percent in May, its highest level since January 2011. The National Association of Home Builders (NAHB)/Wells Fargo builder sentiment index was down two points to 68 in early June, which was due in part to sharply elevated lumber prices.

"Builders are optimistic about housing market conditions as consumer demand continues to grow," said NAHB Chairman Randy Noel. "However, builders are increasingly concerned that tariffs placed on Canadian lumber and other imported products are hurting housing affordability. Record-high lumber prices have added nearly $9,000 to the price of a new single-family home since January 2017."

It makes little sense to refinance in an environment of rising interest rates, and some analysts suggest that an expanding pool of homeowners is choosing cash-out refinancing options over high-rate credit cards as a more affordable means of meeting household budgets. “Releveraging is as wrong now as it was in 2007,” argued Mike Shedlock of Sitka Pacific Capital Management, because if/when home prices finally do retreat in reaction to higher mortgage rates, the ranks of underwater homeowners could swell from their current level (variously estimated between 2.5 million and 5.2 million). Shedlock’s warning seems prescient given claims that 40 percent of the largest US housing markets are overvalued relative to their “long-run, sustainable levels.”

Lumber Prices
Are Skyrocketing Lumber Prices a Sign of Things to Come?
If we’ve learned one thing about economic uncertainty during the COVID-19 pandemic, it’s that markets will always...
END_OF_DOCUMENT_TOKEN_TO_BE_REPLACED

Supply chain
Australia: Demand for New Housing & Lumber Collapses
In March 2020, before the COVID-19 pandemic gripped the global economy, there were 15,386 new dwellings approved in...
END_OF_DOCUMENT_TOKEN_TO_BE_REPLACED