US housing starts increased more than expected to a three-month high in August, driven largely by a surge in multi-family homebuilding. However, building permits surprisingly experienced their largest drop since February 2017, suggesting that homebuilding is having difficulty stabilizing in 2018.

After inching up just 0.9 percent in July, US housing starts rebounded and increased 9.4 percent in August to a seasonally adjusted annual rate (SAAR) of 1,282,000 units. The Commerce Department raised its estimate for starts in July to a 1.174 million-unit rate.

Privately-owned housing completions were up 2.5 percent to a SAAR of 1,183,000 units in August. Regional performance was largely mixed as confirmed by the US Census Bureau report, although the US West drove most of the growth after a lackluster performance a month prior. Seasonally-adjusted total housing starts by region included: 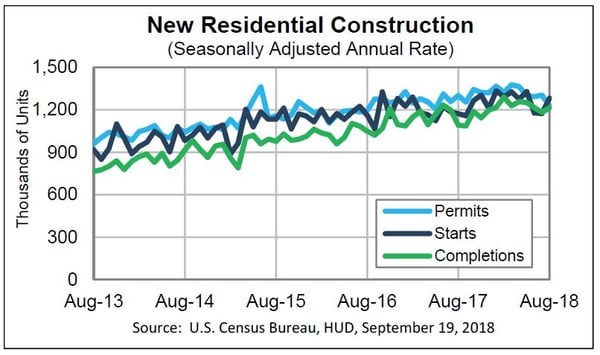 The 30-year fixed mortgage rate increased from 4.53 to 4.55 percent in August, and the National Association of Home Builders (NAHB)/Wells Fargo builder sentiment index was unchanged at 67 in early September.

Bloomberg summed up the conflicting markers by noting that “The data show persistent crosswinds for housing. While starts recovered after two straight declines, homebuilding permits signaled weakness in coming months. The decline in authorizations was broad-based with the single-family segment dropping 6.1 percent, the most in seven years, and multifamily permits falling 4.9 percent for a fifth-consecutive decrease.”

“Strong gains in the Northeast and a moderate uptick in the Midwest helped to balance out any losses in the South and West, halting months of downward momentum,” Yun said. “With inventory stabilizing and modestly rising, buyers appear ready to step back into the market.”

The median existing home price for all housing types increased to $264,800, up 4.6 percent from August 2017 and the 78th straight month of year-over-year gains. Total available, existing housing for sale was at 1.92 million units at the end of August—up from last year’s total of 1.87 million. Unsold inventory in August was at a 4.3-month supply, which is up from 4.1 months a year earlier.

Other data from the report include:

As we noted in June, there is significant data suggesting that housing supply has failed to keep pace with population growth. “Rising interest rates along with high home prices and lack of inventory continues to push entry-level and first-time home buyers out of the market,” Yun added. “Realtors continue to report that the demand is there – that current renters want to become homeowners – but there simply are not enough properties available in their price range.”

The demand is translating to good news for current homeowners, as existing home values continue to appreciate on a YoY basis. A recent report by data analytics provider CoreLogic showed that home equity increased 12.3 percent in the second quarter of 2018; the average homeowner saw their equity increase by roughly $16,200 in twelve months.

Housing Market
April Housing Starts Plunge 30%; Is the Bottom Within Sight?
After tumbling over 18 percent in March, US housing starts plummeted another 30 percent in April to the lowest level...
END_OF_DOCUMENT_TOKEN_TO_BE_REPLACED

Supply chain
Australia: Demand for New Housing & Lumber Collapses
In March 2020, before the COVID-19 pandemic gripped the global economy, there were 15,386 new dwellings approved in...
END_OF_DOCUMENT_TOKEN_TO_BE_REPLACED

Housing Market
March Housing Starts Freefall in Wake of Pandemic
Not surprisingly, US homebuilding dropped sharply in March as the COVID-19 pandemic continues to wreak havoc on...
END_OF_DOCUMENT_TOKEN_TO_BE_REPLACED