US Labor Market Wraps Up 2019 With a Bang

Every month, Forest2Market publishes updated forecasting products designed specifically for participants in the forest value chain. The Economic Outlook is a macroeconomic indicator forecast that supplies critical information, context and insight about general economic trends and direction, and the 4Cast supports regional operational decision making for those who buy and sell timber. With an understanding of economic indicators, future stumpage prices and insight into buying and selling windows (periods in which buyers or sellers hold relative market advantage), subscribers are better able to time sales or purchases, negotiate prices, manage workloads and control inventory levels. The following commentary is just a sampling from the most recent Economic Outlook for December 2019.

The Bureau of Labor Statistics’ (BLS) establishment survey showed a solid rise in non-farm payroll employment of 266,000 jobs in November (+180,000 expected), the fastest growth since January. Also, combined September and October employment gains were revised up by 41,000. 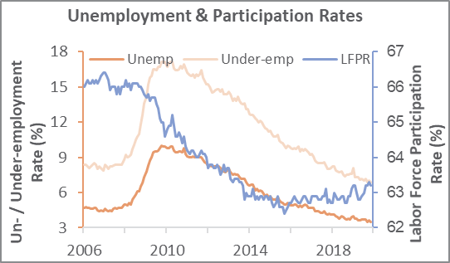 The establishment (+266,000 jobs) and household survey results (+83,000 employed) were directionally consistent but offered rather disparate views of hiring strength. Growth in employment taxes withheld during November—a rather modest +1.4 percent MoM (+7.7 percent YoY), to $200.5 billion—lends credence to the household survey result. On the other hand, the BLS seemingly “tamped down” the headline establishment jobs number by applying an outsized seasonal adjustment. Had average (since 2009) November CES (business birth/death model) and seasonal adjustments been used, job gains might have been an even more robust +404,000. 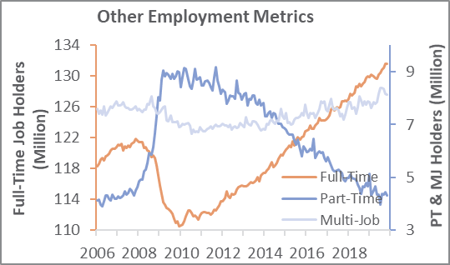 Average hourly earnings of all private employees rose by $.0.07, to $28.29 (+3.1 percent YoY). Because the average workweek was unchanged at 34.4 hours, average weekly earnings increased by $2.41, to $973.18 (+2.9 percent YoY). With the CPI running at an annual rate of 1.8 percent in October, workers are maintaining purchasing power according to official metrics.

While November’s jobs report may be seen as “calming concern about a slowdown in the economy or even potential recession,” it is inevitable the labor market will slow at some point. “The question [is] when and how quickly,” said Josh Wright, chief economist at recruiting-software provider iCIMS. One of the most optimistic forecasts we have seen comes from Bloomberg analysts who think the unemployment rate could be as low as 3.3 percent by November 2020. In the meantime, “it’s hard to see how growth could slow materially” unless/until the labor market actually contracts, said MetLife Investment Management’s Drew Matus.