According to trade data compiled by the US Census Bureau through September 20181, plywood, veneered panels and similar laminated wood imports to the US from Brazil are on track to increase by nearly 0.192 billion square feet (BSF), or 34 percent, over 2017. This increase would result in a vessel customs value of $343 million—which is 55% above the $222 million vessel customs value observed last year.

Over the last 15 years, demand for Brazilian plywood has experienced some major swings due to dynamic changes in the US housing market—as evident in the graph below. Since bottoming in 2011, Brazil has progressively increased its plywood exports to the US and, while these volumes are a long way from returning to the 1.33 BSF high that was seen in 2005, imports have grown by 97% since the 0.03 BSF low only 7 years ago.

Figure 1: Plywood Imports from Brazil and Vessel Customs Value—Total All US Ports, 2003-20018 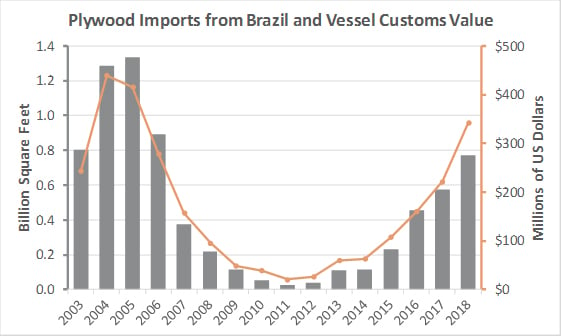 When analyzing ports located solely along the coast of the US South (Table 1), plywood, veneered panels and similar laminated wood imports to the US from Brazil are on track to reach 0.25 BSF by the end of the year (Figure 2). This represents 33% of the total import volume from Brazil to all ports in the US and 33% of the total vessel customs value. For this reason, some domestic plywood markets in the South have experienced increased competition in recent years.

In one specific example of this competition, Georgia Pacific (GP) recently announced that it will permanently close its plywood production facility in Warm Springs, Georgia by the end of 2018. In a statement sent to a local news network, GP’s Senior Manager for Public Relations said, “Georgia-Pacific will permanently cease manufacturing operations at its Warm Springs, Ga., plywood facility, due to overall market conditions. Although the new home construction market has returned somewhat since the recession in 2007/08, the construction market has continued to tighten this year due to higher interest rates and labor shortages. Plywood continues to be challenged by different – less costly options – like OSB and imported plywood continues to be a big driver. Georgia-Pacific remains a strong player in the plywood manufacturing business with eight plywood mills across the U.S.A.”3

Table 1: 2018 Plywood Imports from Brazil to the US South Coastal Ports and Vessel Customs Value 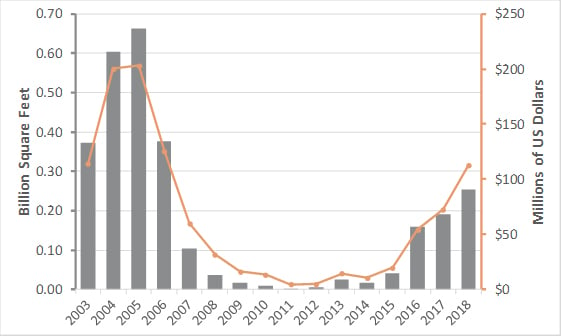 Another factor that has significantly impacted the Brazilian export market is the waning value of the Real (R$), Brazil’s national currency, when compared to the US Dollar. The US Dollar maintains a relatively strong position globally. Over the last 15 years, the Real exchange rate has gone from R$1.67 per USD in 2011 to over R$4.00 per USD in mid-2018 (Figure 3). While the volatility began to increase in 2018 after flattening in 2016 - 2017, Brazilian exporters are still advantaged (from a profitability standpoint) when shipping goods to the US. 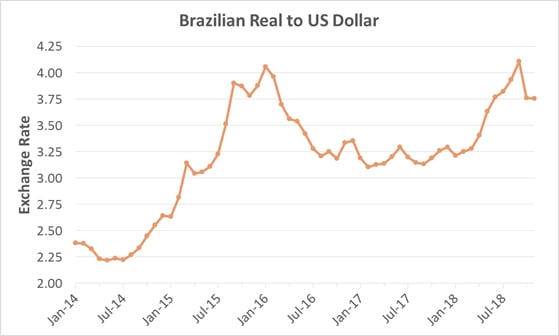 For 2019, our forecast calls for continued, gradual improvement in the US housing, construction and remodeling markets. It is more than likely that the US Federal Reserve will raise the federal funds rate at least a couple of times next year, which will likely result in the weakening of the US dollar against other major currencies.

The South American structural panel segment will be most affected by these conditions; competition for market share between Brazil and Chile will be significant. The Brazilian economy will slowly stabilize in the wake of the country’s recent election, as will the Brazilian Real. Overall, we project the 2019 exchange rate for the Real to be around R$3.50 per USD, which will continue to make Brazilian plywood imports to the US attractive and will strengthen Brazil’s share of overall imports into the US in the coming year.

1Reflects actual data through September 2018 but includes estimates for October to December 2018.

2Values reported in kilograms were converted to square feet assuming a plywood thickness of ½-inch. 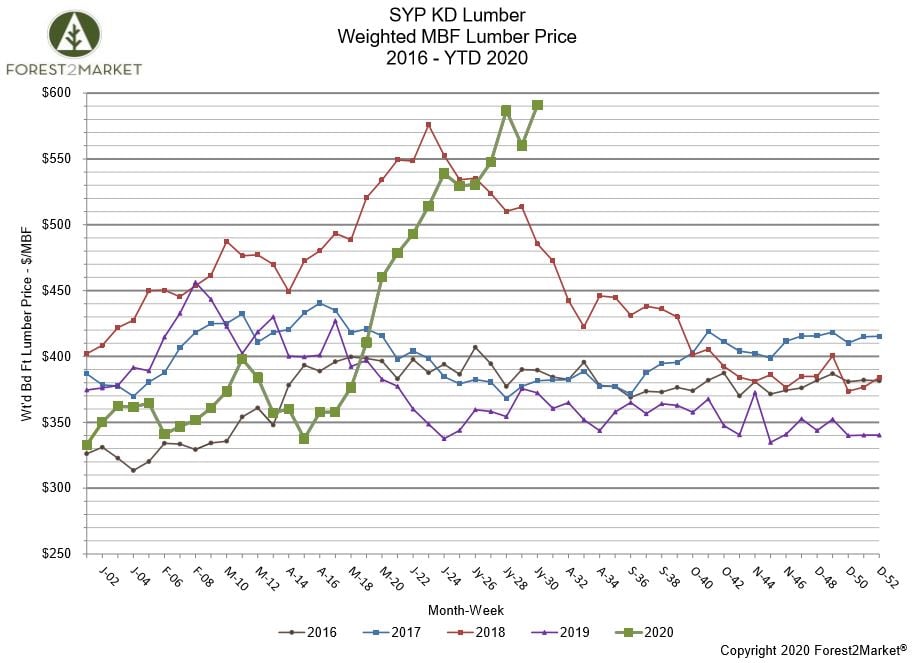 Lumber Prices
UPDATE: Southern Yellow Pine Lumber Prices Break Previous Record
In 1Q2020, the lumber market was showing signs of stability as the housing market seemed to catch its stride. As a...
END_OF_DOCUMENT_TOKEN_TO_BE_REPLACED 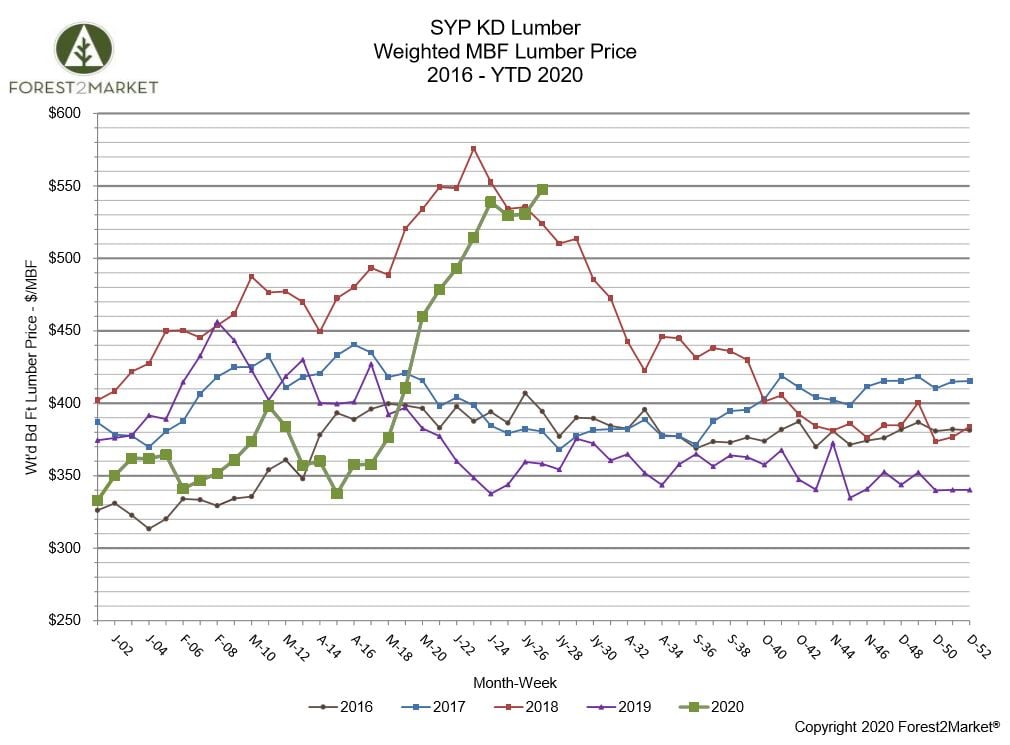 Lumber Prices
Southern Yellow Pine Lumber Prices Surge to Two-Year High
If you’ve been paying attention to the performance of stock indices and listening to financial pundits in recent...
END_OF_DOCUMENT_TOKEN_TO_BE_REPLACED

Timber Prices
How Has COVID-19 Impacted the PNW Forest Sector?
In the Pacific Northwest (PNW), the forest products industry has rebounded somewhat sooner than most believed it...
END_OF_DOCUMENT_TOKEN_TO_BE_REPLACED