Despite the build-up in sawtimber inventory from 2007-2014, sawtimber prices were affected more by demand as solid wood production continued to increase in 2014. Demand was up 5.8 percent and lifted sawtimber prices $1.21 per ton to average $22.92 per ton in 2014, a 5.6 percent increase. However, the supply effect is not absent, as harvest removals have recovered to roughly 87 percent of their 2007 level while prices are at 72 percent of their 2007 level. While we do not yet have the updated acre data for 2015 included in the graph below, the upward trend continues. 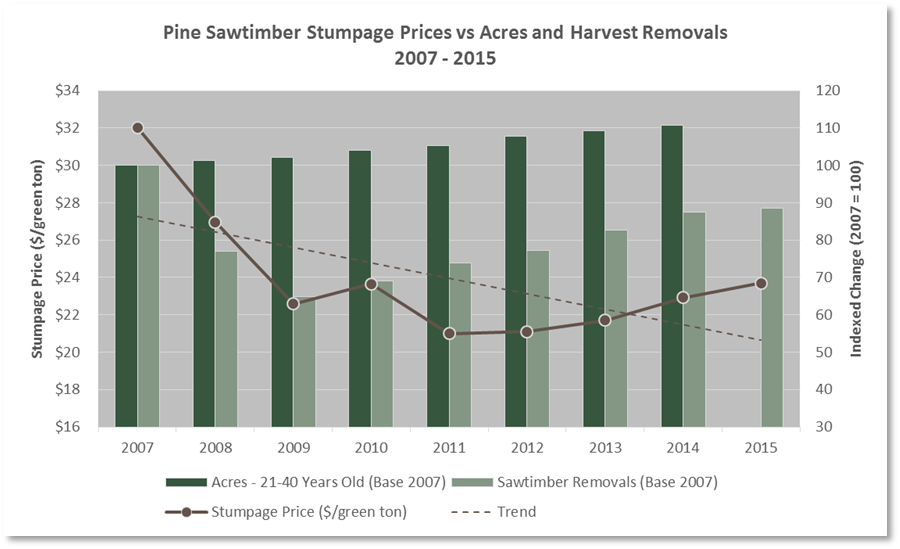 Demand continued to increase for pine pulpwood in 2014. Compared to 2013, demand increased 1.7 percent. Compared to 2007, demand has increased 9.4 percent (1.3 percent annually). Sawtimber harvests from clearcuts have helped to generate come-along pulpwood supply, but opportunities to secure supply from first thinnings have decreased as inventory in the 11-20 year age class has continued to decline. As a result of the increased demand and the impacted supply, stumpage prices averaged $11.15 per ton in 2014, an increase of $0.99 per ton or 9.7 percent from 2013. Compared to 2007, stumpage prices have increased $2.67 per ton or 31.5 percent (4.0 percent annually). 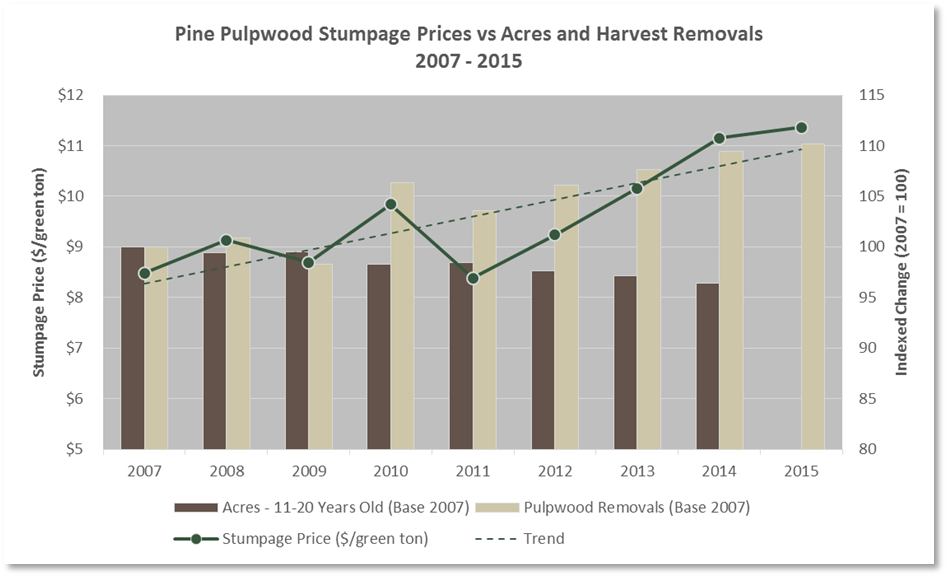 Our predictions from last year are holding true: While sawtimber demand is returning and prices are slowly increasing, abundant sawtimber supply is impeding rapid increases in price. The opposite is occurring with pulpwood; while available come-along supply has opened up with the increased harvest of sawtimber, the continued downward trend in available inventory from first thinnings and the rapid increase in demand is outpacing the come-along pulpwood. Price has increased substantially in response.

We expect to see major changes in the pulpwood market with the addition of new consumers such as biofuels and biochemical firms. Development of pellet mills is slowing, but we estimate the potential for seven additional mills to be constructed. Even fluff pulp consumers are adding demand for this resource, including Domtar’s expansion in Arkansas, International Paper in North Carolina and the Chinese firm Sun Paper in Arkansas. However, with declining acres in the 0-10 age class, the future supply for pulpwood will be constrained.

With pulpwood supply being constrained and with potential demand increasing substantially, one has to wonder how long it will be before pulpwood prices reach levels that will drive high-cost mill financials into the red. This scenario combined with the strengthening dollar against other world currencies is creating market headaches and uncertainty for the immediate future. As we stated last year, the key for both buyers and sellers that have the ability to operate southwide will be identifying future markets now, and preparing to shift and optimize their sales/production to these lower cost markets.

For those single-mill consumers that cannot make regional optimization decisions, it will be imperative to analyze their supply chains with a high degree of scrutiny and if they are able, make capital allocations now to lower future production costs. For sellers to these single-mill consumers, it will be imperative to negotiate without price gouging while negotiating for higher-volume sales. The alternative could be (as we’ve witnessed with many sawmills) fewer consumers to purchase these volumes. 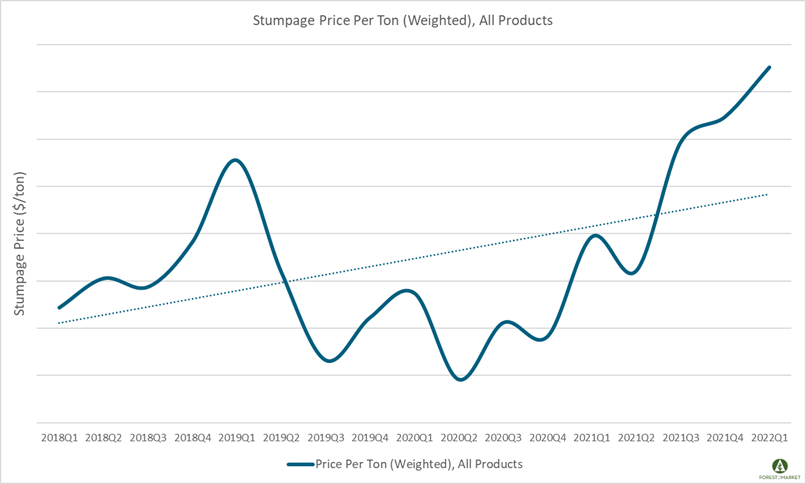 Timber Prices
Southern Timber Prices Continued to Climb in 1Q2022
Continuing the strong demand trend that we witnessed during most of 2021, the weighted average price for southern...
END_OF_DOCUMENT_TOKEN_TO_BE_REPLACED