Stumpage prices during July/August were a mixed bag, with all softwood products dropping slightly along with hardwood pulpwood. Hardwood sawtimber was the lone product that experienced a small gain in price. On a Southwide basis, pine pulpwood, pine sawtimber and pine chip-n-saw fell slightly during July and August. Hardwood pulpwood had the biggest drop of -5 percent, while hardwood sawtimber saw modest a gain of +1 percent.

Hardwood sawtimber prices showed modest gains (+1 percent) on a Southwide basis, ticking up to $29.89/ton. The East-South experienced the largest gain, up +4.6 percent, to $27.33/ton. The West-South and Mid-South both remained relatively flat, both falling <1 percent. The West-South fell to $31.70/ton and the Mid-South dropped to $30.65/ton. 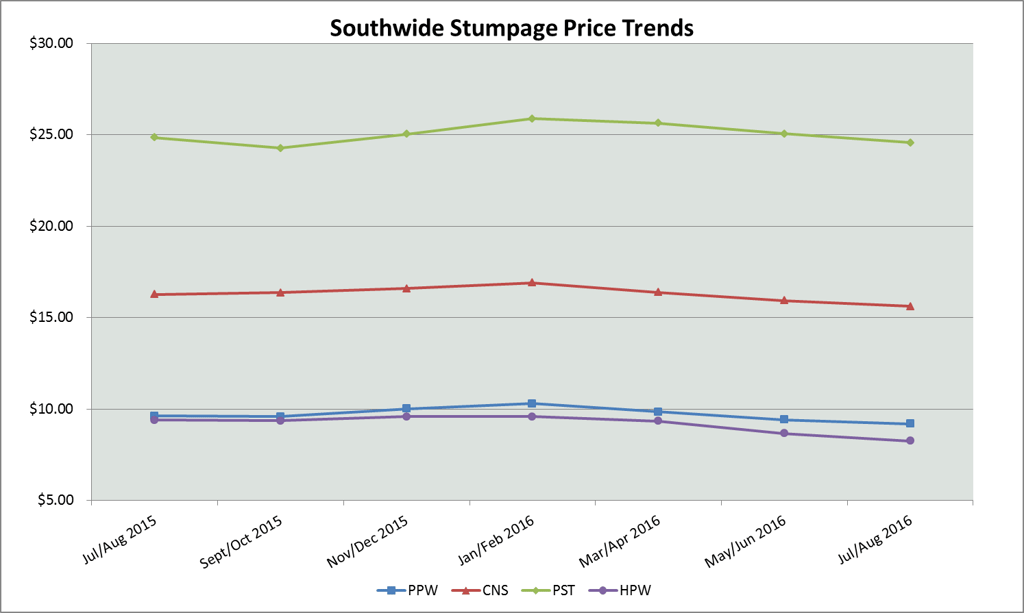 While parts of the southeastern US have experienced some significant rain events lately, this has not had much effect on stumpage prices as of yet. Going forward, we expect pine and hardwood pulpwood prices to tick upward as fall inventory building begins and seasonal weather restricts supply. In the near-term (present through the end of 2016), PST and CNS will remain flat in response to idle housing numbers.

Timber Prices
Where are Southern Timber Prices Headed?
The modern forest supply chain is without guidance for operating in the current pandemic-driven economic...
END_OF_DOCUMENT_TOKEN_TO_BE_REPLACED