There was little movement in stumpage / timber prices during November/December. There were both price increases and drops, but none of these changes were significant. On a Southwide basis, pine chip-n-saw and hardwood sawtimber increased in price (less than 1 percent) during November/December. Pine sawtimber, pine pulpwood and hardwood pulpwood dropped modestly in price during the two-month period. 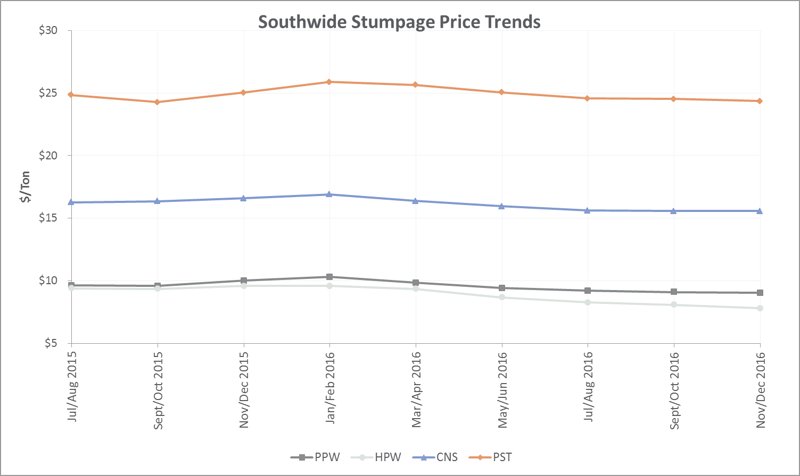 As illustrated in the chart above, after peaking in Jan/Feb 2016, all products were in a declining price trend during 2016. This trend continued in Nov/Dec 2016: All products remained relatively flat or decreased in price. Hardwood pulpwood experienced the greatest decrease from Sept/Oct at -$0.29/ton. Pine pulpwood and chip-n-saw prices are around $1.00/ton less than they were in Nov/Dec 2015, and pine sawtimber prices are $0.70/ton cheaper while hardwood pulpwood is $1.80/ton cheaper.

During the last few months, much of the southeastern US has experienced abnormally dry weather, which has likely played a large role in keeping stumpage prices low during a time of the year when we typically see a boost in prices. In the near term, minimal restrictions in supply and a humble economic outlook for 2017 will likely continue to suppress any large increase in stumpage prices for all products throughout the region.

Timber Prices
Where are Southern Timber Prices Headed?
The modern forest supply chain is without guidance for operating in the current pandemic-driven economic...
END_OF_DOCUMENT_TOKEN_TO_BE_REPLACED