Per recent data released by the USDA Foreign Agricultural Service (FAS), the US exported over 6 million metric tons of wood pellets in 2018, which was up roughly 17 percent versus to the 5.1 million metric tons exported in 2017. The FAS data also estimated that the total value of these exports increased nearly 22%, from $666 million in 2017 to $812 million in 2018. The US exported wood pellets to over 30 countries last year, although the volumes exported to most of those countries were quite small.

While the Asian biomass market has begun to take shape in earnest and shows promise for the future, the more mature European renewable energy market continues to dominate the global trade of wood pellets. Not surprisingly, the United Kingdom alone imported a vast majority of the wood pellets manufactured in the US—roughly 4.7 million metric tons, or nearly 78% of total exports. Despite news of a maturing bioenergy market in the UK, wood pellet imports from the US were up nearly 15% year-over-year (YoY).

To put the UK’s number in perspective, the number two and three importers of US wood pellets—Belgium-Luxembourg and Denmark—received roughly 580,000 tons and 473,000 metric tons, respectively. Belgium-Luxembourg’s imports equal just 10% of the UK’s total imports. 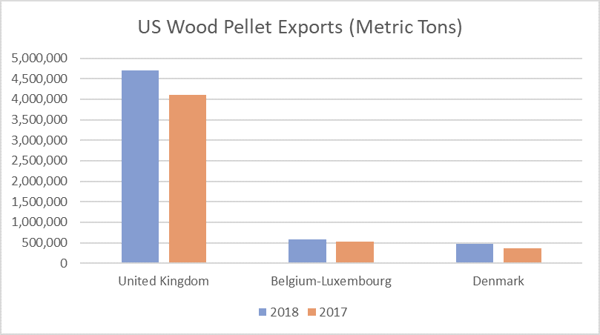 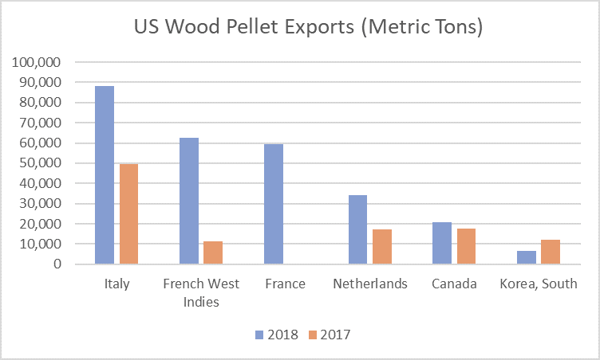 Most of the top nine importers of US wood pellets demonstrated YoY growth (data for France was unavailable)—some more significant than others. Exports to the French West Indies were up 458% and the Netherlands were up 96%, while exports to Belgium-Luxembourg were up just 8%. The lone exception was South Korea, whose shipments were down nearly 46%.

The FAS data shows the US exported roughly 1,700 metric tons of wood pellets to Japan in 2018, but that number will increase significantly over the next few years based on the number of new long-term off-take agreements between US pellet manufacturers and Japanese Bioenergy producers.