In August 2013, I predicted wood fuel price would fall. So, why have prices increased? Three market factors should have exerted downward price pressure on wood fuel delivered prices over the past year (1Q2013-1Q2014):

If supply has increased and diesel costs have decreased over the period, then why has the delivered cost of wood fuel gone up? 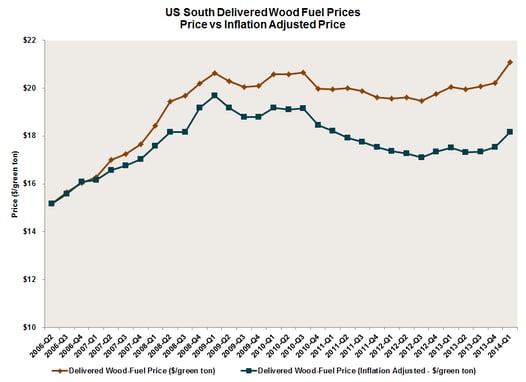 The reason for the increase in wood raw material costs is two-fold:

The combination of increased demand and heavy rainfall influenced the escalation in wood fuel delivered price.

Over the remainder of 2014, lumber production will remain steady in response to housing starts, and this will generate wood fuel supply. Pulpwood demand will continue to increase, creating additional supply. Despite the added supply, we expect wood fuel prices will continue on an inclining trend as dedicated biomass power facilities and pulp and paper mills increase wood fuel consumption.

What impact will press release below have on swing to biomass power:

“While we are still reviewing what has just been released, we are disappointed that EPA decided, in the interim, to effectively treat these emissions the same as fossil fuel emissions.”

Bioenergy
How is COVID-19 Impacting the Global Bioenergy Sector?
The COVID-19 pandemic may have temporarily changed the way a number of businesses interact with customers, but those...
END_OF_DOCUMENT_TOKEN_TO_BE_REPLACED

Bioenergy
WSJ’s Incomplete Reporting Perpetuates Misconceptions About Bioenergy
A recent article published in the Wall Street Journal notes that the increased consumption of wood pellets in the...
END_OF_DOCUMENT_TOKEN_TO_BE_REPLACED