As Q1 2015 came to a close, Europe’s near-term commitment to utilizing low-carbon energy solutions continues to reflect a growing global awareness of pioneering energy alternatives. International interest in wood pellets — an increasingly popular and sustainable biomass feedstock— remains high, particularly by Western European utilities. In fact, wood pellet demand continues to rise year-over-year and growth in the sector has led to a number of recent pellet mill expansions in the Southeastern US, which is an ideal region to manufacture this product due to its thriving forestry and timber industry. In recent years, US-based pellet producers have fulfilled the increased demand abroad and with continued growth in the sector— as well as continued EU subsidies for renewable energy—there are real opportunities for American producers.

An international interest in cost-effective, renewable energy and the ability to generate heat and power from

low-carbon sources have been driving an increase in US wood pellet production. Globally, the 2014 demand for wood pellets exceeded 23 million metric tons. Due to a limited ability to supply its own biomass, Europe’s demand alone was over 19 million metric tons. With continued interest in the biomass model and investment from some of Europe’s leading utility providers, consider the recent news out of the region:

Europe’s 2014 demand for 81 percent of the global wood pellet supply is so exceptional that one might be tempted to categorize it as a momentary trend. But consider the power station conversions mentioned above as well as the rise in thermal generation and this growth suggests a transition towards permanent and sustainable low-carbon sources of energy. As governments continue to demand adherence to sets of laws designed to curtail environmental impact (Renewable Fuel Standard; Biomass Sustainability Guidelines), the public is becoming increasingly aware of—and eager for— energy alternatives.  The Economist Intelligence Unit predicts a renewable energy increase of 13% in 2015 as cleaner sources of power become more popular.

In the case of the European Union (EU), substantial subsidies exist for the creation of renewable energy via the European Commission’s Renewable Energy Directive, which “establishes an overall policy for the production and promotion of energy from renewable sources in the EU. It requires the EU to fulfil at least 20% of its total energy needs with renewables by 2020 – to be achieved through the attainment of individual national targets.”

A Steady Supply of Southeastern Biomass

As mentioned above, the Southeast is a natural hub for the production of wood pellets. Biomass is plentiful, and the dense canopies that provide (relatively) fast growing cycles make it an ideal region in which to plant and harvest timber. And with convenient regional access to major shipping ports, it’s no wonder the Southeast is home to over 80 individual pellet mills. Note the graph below, which illustrates the regional pellet production growth over the last seven years as well as the projected explosion in growth over the next five years. 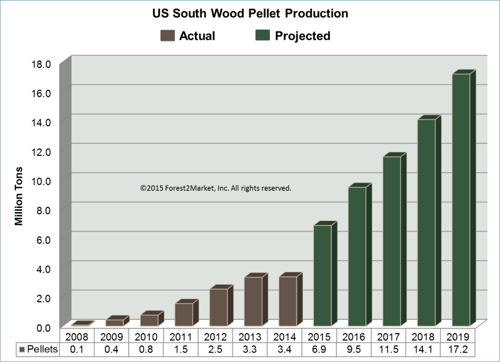 Though impressive, these developments do not tell the whole story of the larger wood pellet sector. As with any emergent industry serving a complex, global market, there will be challenges both home and abroad to overcome in the near and long terms. As Seth Ginther, Executive Director of the U.S. Industrial Pellet Association recently noted, US pellet producers dealt with a substantial surplus of product during Q1. He added, “Additionally, there are some regulatory constraints, such as a recent doubling of value-added tax on pellet imports in Italy that has increased the price of pellets by 30-35 euros per tonne.”

It is also worth noting that the EU’s renewable energy directive was conceived prior to the 2008 financial crisis and, while commendable, reflects the optimism of a 1990’s economic climate. With tangible budgetary constraints and concerns over the last seven years—as well as disparate expectations and capabilities by EU member—one must question whether the 20% goal is attainable and if subsidy qualifications will be restructured within the next five years.

While the larger EU directive for renewable energy goals is based on the 2020 target date, the UK government, for its part, has stated that it will end biomass subsidies in 2027. How will this move affect the market for wood pellets and the demand for American timber resources going forward? There is no energy market crystal ball—especially when government subsidies are involved— but consider the investments being made on both sides of the pond:

As Q2 ushers in the continued construction of new wood pellet facilities throughout the Southeast, there is reason for regional producers to remain optimistic. Again, consider the projected growth detailed in the above graph and the ongoing investment being made abroad. Through the combined efforts of organizations in both the US and Europe, these symbiotic relationships are meeting current clean-energy requirements while laying the groundwork for a cleaner—and greener—future. This is the objective, after all, that will remain top of mind for individuals and legislators for decades to come.

Wood Pellets
Russia's War is Changing Wood Pellet Market Dynamics in Europe
The international trade of wood pellets has increased yearly for over ten years thanks to growing demand in Europe and...
END_OF_DOCUMENT_TOKEN_TO_BE_REPLACED