As we recently noted, the global resurgence in wood production has been driven in part by the popularity and expansion of wood pellets, which are primarily being used for thermal heating purposes at both the consumer and industrial levels. While most of the recent growth in consumption has occurred in Europe, the technology is certainly scalable and usable as a replacement for fossil energy virtually anywhere. Putting the numbers in perspective, Europe consumed 78 percent of the 26 million tons of wood pellets produced globally in 2014.

Confirming the growth trend, The United Nations Economic Commission for Europe (UNECE) recently released its findings of the biennial UNECE/FAO Joint Wood Energy Enquiry (JWEE) 2013, which promotes communication and cooperation between the energy and forestry sectors in member States. The UNECE is made up of 56 member States, including the countries of Europe, but also countries in North America (Canada and United States), Central Asia (Kazakhstan, Kyrgyzstan, Tajikistan, Turkmenistan and Uzbekistan) and Western Asia (Israel). The UNECE region is also home to 20% of the world’s population.

Now in its fifth round since 2005, the JWEE has become a reference source of information on wood energy. Primary findings include: 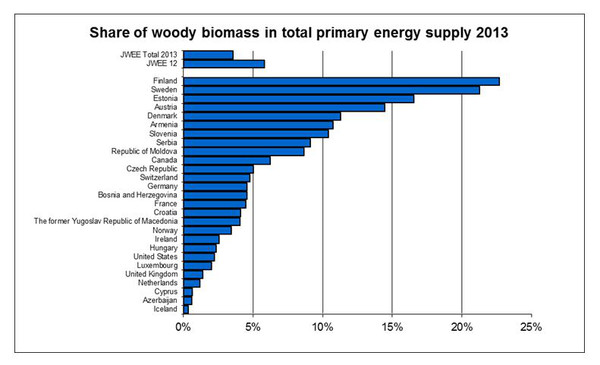 Within UNECE member States, co-products and residues from the forest products industries contribute 62 percent of the wood fiber for energy generation; processed wood fuels with improved energy content such as wood pellets, briquettes and charcoal are also included in this category. 31 percent of the wood fiber used for energy generation comes directly from the forest and wooded areas outside forests.

However, the proportion varies among a number of countries, as Armenia, Hungary, Macedonia, Moldova, Azerbaijan, Serbia, Croatia, Bosnia and Herzegovina, Slovenia and Czech Republic rely heavily (60+ percent) on direct wood supplies, such as firewood. Conversely, countries such as the United States, Canada, United Kingdom, Ireland, Sweden, Austria and Finland rely mainly (60+ or more) on wood supply from indirect sources such as co-products.

The United States (48 percent), Sweden (42 percent), Finland (41 percent) and Canada (29 percent) have large shares of energy that are generated from black liquor, reflecting the importance of the pulp and paper industries in their respective forest products sectors for the generation of wood energy. 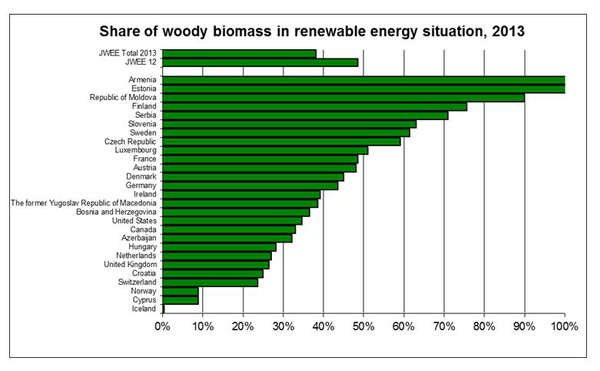 The forest products industry typically consumes energy generated from the solid and liquid co-products of its manufacturing processes. Countries with important forest industries, such as Finland, Sweden, Canada and the United States therefore have a higher share of industrial consumption. Residential use, which is dependent upon primary solid biomass sources, is prevalent in most reporting UNECE countries except Canada, Cyprus and Iceland where wood charcoal is primarily used for energy generation in the residential sector.

The industrial power and heat sector is the most important consumer of wood energy in Denmark, Netherlands and the United Kingdom, and has relatively large shares in Estonia, Switzerland, Sweden, Finland, Austria and Ireland.

The assessment and development of the use of wood energy is derived from the 12 countries that have responded to all rounds of the JWEE enquiry (Austria, Cyprus, Finland, France, Germany, Ireland, Luxembourg, Serbia, Slovenia, Sweden, Switzerland and the United Kingdom). The results from these countries confirm the increasing total amount of wood used for energy in the region and the continuing predominant role of wood as a renewable resource.

Between 2007 and 2013, the amount of wood used for energy purposes grew annually by 5.4 percent. The role of wood in TPES grew from 4.4 percent to 5.8 percent during this period. However, the share of wood in the renewables category was 48.6 percent in 2013, a decline of 1.5 percent between 2007 and 2013. This slight reduction most likely reflects the increased growth of other sources of renewable energy, including wind and solar.

In the United Kingdom, wood now accounts for 1.4 percent of TPES (up from 0.1 percent in 2005). This is due in part to the growth of the export pellet market, as a larger share of the wood supply is being mobilized for energy purposes on a global scale. In 2014, Europe and North America accounted for almost all global production (60 percent and 33 percent respectively), and trade in pellets from North America to Europe (mainly the UK) increased by 25 percent in 2014 from the previous year.

Bioenergy
The Value of Carbon Emission Avoidance with Biopower Generation
Per a recent report published by the National Petroleum Council (NPC)—an advisory committee that represents the...
END_OF_DOCUMENT_TOKEN_TO_BE_REPLACED

Bioenergy
WSJ’s Incomplete Reporting Perpetuates Misconceptions About Bioenergy
A recent article published in the Wall Street Journal notes that the increased consumption of wood pellets in the...
END_OF_DOCUMENT_TOKEN_TO_BE_REPLACED