The fickle nature of anti-forestry environmentalists causes them great difficulty in grasping the fact that energy production is not a zero-sum endeavor. There are both positive and negative costs associated with generating the power we all use, regardless of the system and resource used to generate it. While we can generally agree that environmental stewardship should remain a top-of-mind concern when planning for new energy projects, the gradations of “good” and “bad” feedstocks in the minds of environmentalists result in very rigid, unrealistic thinking about energy production.

In the anti-forestry view of renewables, for instance, biomass from wood raw materials is deemed a “bad” feedstock because it results in the harvest of trees for the production of energy. Solar technology, on the other hand, is deemed “good” because it only utilizes stores of energy created by natural sunlight. Or so the narrative goes.

Per a recent article in the Hartford Current, a group of Connecticut environmentalists are now warning about the effects a new surge in solar and natural gas energy projects is having on natural resources like the state's forests and farmlands. Agriculture experts and environmentalists in the state are worried about the loss of hundreds of acres of farmland and forestland not due to harvest regimes and biomass use, but rather due to the siting of massive solar projects for state-approved energy developments.

The Land Use Conundrum

Gov. Dannel Malloy's administration has aggressively pushed for more solar and natural gas energy production in Connecticut to boost the use of clean and renewable sources in meeting the state's energy needs. With the Clean Power Plan on the horizon, one has to assume that more renewables projects will be on the docket in the near and long terms as well. In many cases, the state indirectly subsidizes renewable energy projects while at the same time spending millions of dollars to protect farmland and forests. New conversion projects include:

Many of these proposed projects have drawn strong opposition from some local residents, and they also raise issues about landowner and private property rights. While many environmentalists struggle with the concept of private property rights (a different discussion for a different day), some are beginning to see the flaw in their own narrative, especially when it comes to land use and the preservation of working forests.

"Information gathered to date indicates that hundreds of acres of agricultural land and forest land—including [ecologically important] core forests—have been converted to industrial use (energy production) in recent years," Karl Wagener, executive director of the Council on Environmental Quality (CEQ), recently wrote to state energy officials. Wagener noted that, while state energy policy does call for consideration of the impact energy projects have on the environment, "Unfortunately, efforts to steer large projects away from farmland and forests have been unsuccessful.”

Wagener added that the CEQ "would not want to put up a roadblock to renewable energy in this state. … We're not trying to stop solar energy." But he said the council wants such renewable energy projects steered to former strip malls or industrial sites rather than putting them on forest or farmland, which is simply an unrealistic expectation.

Dennis Schain, spokesman for the state Department of Energy and Env 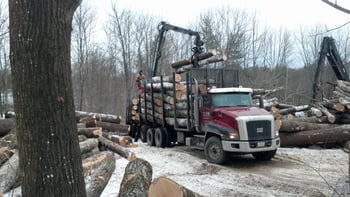 ironmental Protection (DEEP), said, "We clearly recognize the potential for conflicts that can be created between two very important objectives: the need to meet our state's clean energy goals and protection of our valuable lands and natural resources. We are well aware that this issue deserves great thought and attention so that we can develop a solution that helps us strike the right balance.”

The overwhelming evidence has proven time and time again that working forests are healthy forests and, more importantly, they tend to remain natural forestland rather than being permanently converted to other uses. As we recently noted:

These economic incentives drive the preservation of America’s working forests, which is also a concept that many environmentalists struggle to grasp.

As Dave Tenny, President and CEO of the National Alliance of Forest Owners (NAFO) recently noted, “Our privately owned forests are an American success story. Considering that during the last century our nation experienced a more than three-fold increase in population, a seven-fold increase in home construction and a nine-fold increase in the production of pulp for paper, packaging and other consumer products, it is truly remarkable that our forests not only met this unprecedented demand but increased in total tree volume by over 50% in the process. Clearly society’s demands provide the incentive to continue investing in sustainable forestry.” Tenny continued, “If we want to have abundant, productive, life improving private forests in the future, the best thing we can do today is support existing and new opportunities to use them.”

Eric Hammerling, executive director of the Connecticut Forest & Park Association, said if people are trying to decide what type of land is most environmentally important in Connecticut, "core forest is what you want to protect." Core forests are deep woods that are insulated from roads, housing and other types of human developments—many of which are privately-owned and sustainably managed as working forests.

The more we use our forests for the production of everything from paper and lumber, to biomass and biochemicals, the more we grow them. And, as noted above, growing forests provide irreplaceable environmental, economic and public benefits on an enormous scale.

Can the same be said of a solar panel field?

Bioenergy
Forest Service Announces Investments in Wood Energy and Innovation
The Guardian recently published a piece supporting the likelihood that the COVID-19 pandemic will have a drastic...
END_OF_DOCUMENT_TOKEN_TO_BE_REPLACED