North American softwood lumber prices are once again creeping back near the record highs that were reached in 2Q2021. Forest2Market’s composite southern yellow pine (SYP) lumber price for the week ending February 25 was $1,083/MBF, which represents a YoY increase of 16% and an astounding 200% increase over the same week in 2020 – just before the initial impacts of the pandemic hit the US economy. 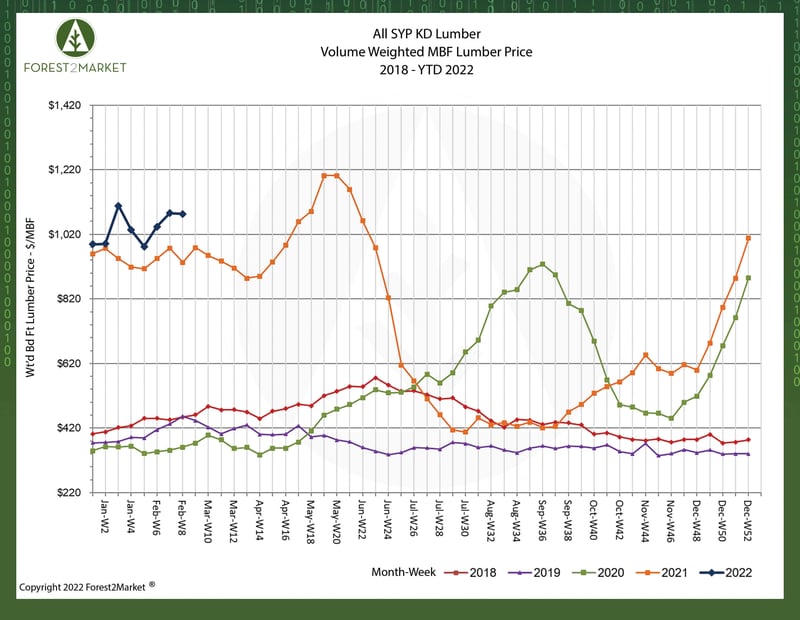 Over the course of the last two years, there has been a lot of interest in the disconnect between log and lumber prices – especially from many DIY consumers who never really gave much thought to the solid wood supply chain. And why would they? Prices for finished lumber products have been reliably stable for nearly two decades.

Likewise, many timberland owners have been wondering why the sawlogs on their land haven’t commanded a price that better corresponds to the high lumber prices.

As a heavily traded commodity, market prices for lumber react to a series of events on a daily basis, and the reactions may be short-lived. But the market for trees is less connected to lumber price volatility than one might think. In the US South, for instance, the inventory of standing timber has risen unimpeded for nearly 15 years, which has resulted in an oversupplied market. The surplus of logs combined with improved mill efficiencies has kept log prices suppressed, even as demand for lumber surges and sawmill production continues to increase.

In mid-2021, we noted that there were emerging signs that this trend is beginning to change. Even in an economy now defined by a growing sense of trepidation, the housing market continues to require a whole lot of lumber, and southern sawtimber prices are reflecting that demand in earnest as prices are now at a 14-year high.

When comparing quarterly pine sawtimber stumpage prices to finished lumber prices since 2010, a couple of noteworthy developments from the data include: 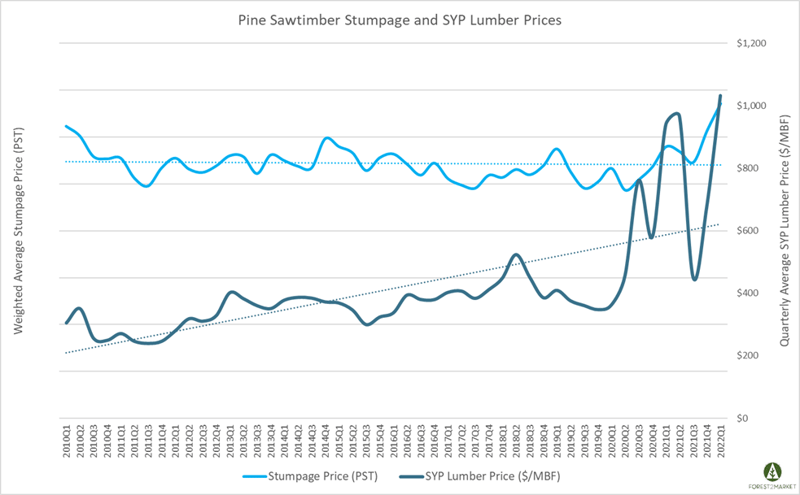 Looking more closely at the data since 2020, we can see a clear, steady increase in pine sawtimber stumpage prices, despite all of the noise in lumber price performance. 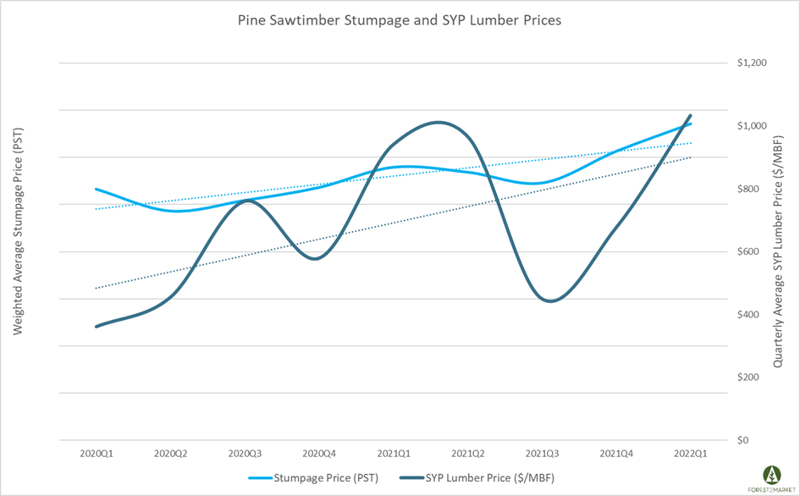 While the record high lumber prices we have witnessed over the last year have been demand driven, southern sawmills are incrementally increasing production to meet the needs of homebuilders. New capacity in the form of both greenfield mills and existing mill expansions will help meet demand targets and establish more surge flexibility in the supply chain. Throughout the South, over 3 billion board feet (BBF) of new lumber capacity is scheduled to come online over the next year.

Modern lumber mills are highly efficient, but they still require a significant amount of raw material in the form of sawtimber (logs). For example, a new southern sawmill producing 250 million board feet (MMBF) of lumber with a yield of 1 MBF per 4 tons of logs will consume a million tons of logs each year. Scaling up to meet the demands of the additional 3 BBF of announced capacity will require nearly 12 million tons of pine sawlogs.

Due to the South’s competitive costs and deeply embedded forest supply chain, we expect it to remain the center of North American forest industry expansion over the next decade. While this new capital might not be enough to drive the kind of price spike many landowners have been hoping for, it will help to reduce the large oversupply of standing timber throughout the South. Based on current data, the rise in log consumption now appears to be affecting prices at the stump.

Southern timber prices are now higher than they have been in 14 years, and more price volatility is likely to occur in the coming months. If you are not a subscriber to our Stumpage 360 database or our regional Timber Owner Market Guide, now is the time to stay ahead of your local market with the power of transactional data.

Timber Prices
US South Sawlog Supply is Likely to Tighten But Surplus of Small Logs and Residues Will Create Opportunities
The US South’s softwood industry has enormous potential for a variety of reasons. The region has a significant forest...
END_OF_DOCUMENT_TOKEN_TO_BE_REPLACED

Lumber Prices
Softwood Lumber Prices Tumble 40%; Is Another Rally on the Horizon?
The volatile North American softwood lumber market continues to keep us all guessing as we enter mid-2Q2022. After...
END_OF_DOCUMENT_TOKEN_TO_BE_REPLACED

Log Markets
War in Ukraine Will Tighten Lumber Markets in Europe, China and The US
One immediate impact of the war in Ukraine and the sanctions by Western countries has been a dramatic reduction in...
END_OF_DOCUMENT_TOKEN_TO_BE_REPLACED