The only sovereign nation that is also a continent, Australia is the sixth largest country in the world. With just over 1.9 billion acres in total land area, Australia is quite large and boasts a distinctive geography and extremely diverse landscape. Due to its unique ecosystems, Australia’s native forests, rainforests and plantation forests tend to be scattered throughout the continent—primarily within close proximity to its vast coastlines.

Most of Australia’s forests are located along the northern and eastern coasts, though the southwestern coast also contains forests that extend northward into the Western Australia territory. The island of Tasmania off the southern coast is also heavily forested with stands of industrial plantations and native forests as well as rainforests that cover most of its western coastline. Australia’s total forested area comprises approximately 309 million acres, which equates to roughly 16 percent of the total land area and three percent of the global forest total. 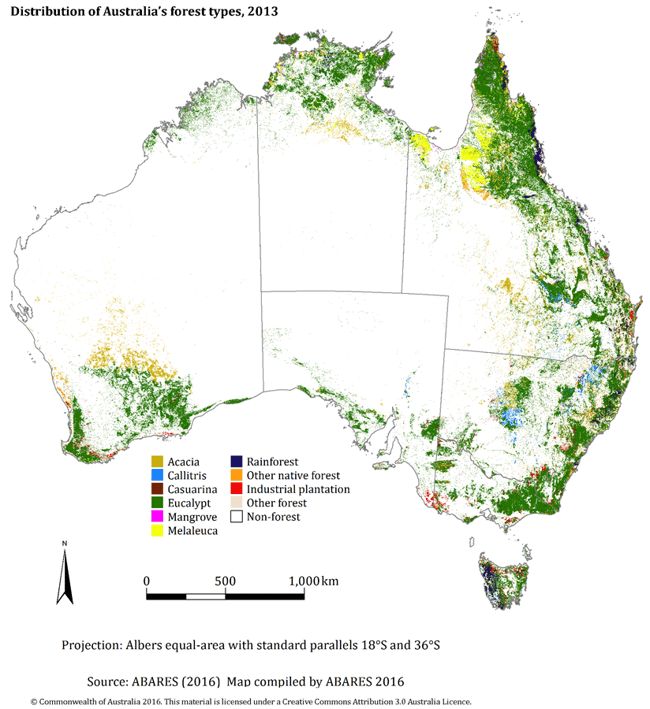 The total plantation land area has diminished very slightly over the last two years as a result of plantation managers revising their area figures, unproductive plantations being returned to agricultural purposes or the expiration of lease arrangements. In parts of Australia, however, plantations can yield up to 14 times more wood per hectare than native forests, largely due to continued improvements in silvicultural management practices. These improvements are a major reason for the increased wood yields that ensure high-quality and cost-competitive timber products.

Source: Australian Bureau of Agricultural and Resource Economics and Sciences

About 101 million acres of Australia’s native forests are also identified as part of the Indigenous Estate, most of which are located in Queensland and the Northern Territory.

The ownership structure for industrial plantations is different than native forests, as land ownership can differ from ownership of the actual trees on the land, and management arrangements are oftentimes complex. In 2015, 50 percent of the total commercial plantation area was held by institutional investors, 21 percent by government, another 21 percent by private growers, and roughly 5 percent by managed investment schemes (MIS).

Global Forest Industry
Effects of the COVID-19 Pandemic on Brazil’s Forest Sector
Some players in the Brazilian forest-based industry are doing well in the face of the economic crisis caused by the...
END_OF_DOCUMENT_TOKEN_TO_BE_REPLACED