Last month, we reported on The White House’s recent policy statement rejecting HR 2822—a resolution that would label forest biomass fuels as carbon-neutral renewable resources—and we provided a thorough rebuttal to the administration’s dismissal of biomass as such. This month, two Members of Congress have renewed focus on the issue by forwarding a convincing letter to US Environmental Protection Agency Administrator Gina McCarthy, Department of Energy Secretary Ernest Moniz and Department of Agriculture Secretary Tom Vilsack.

U.S. Representatives Reid Ribble (R-WI) and Sanford Bishop (D-GA) have led a bipartisan group of 154 Members of Congress in urging the White House, EPA, and USDA to categorize sustainably-managed forests as carbon neutral in future EPA regulations and rulemakings. This renewed attention could not come at a more opportune time; media coverage of President Obama’s recent support for the Clean Power Plan (CPP) has been broad.

Through the CPP, the President seeks to cut power plant emissions 32 percent by 2030 (from 2005 levels). As we noted in recent coverage of the CPP, the Plan promotes flexibility at the state level noting, “All low-carbon electricity generation technologies, including renewables, energy efficiency, natural gas, nuclear and carbon capture and storage, can play a role in state plans.” 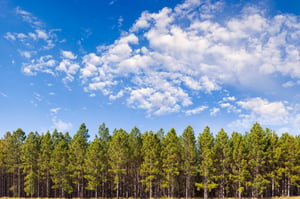 While the letter is an effort to keep the conversation moving, the forest products industry and its advocates have been left scratching their heads at the administration’s seeming indifference to the low-carbon benefits and abundant access to forest biomass. National Alliance of Forest Owners (NAFO), an organization whose membership encompasses more than 80 million acres of private forestland in 47 states, has also asked congress for further clarity in the role forest biomass will play in the future, noting that “The carbon benefits of renewable forest biomass are well established.

Congressman Ribble added, "Sustainable forest management has been documented many times over as a net positive for our environment, and as the number one paper-producing state in the nation, it is a cornerstone of both our economy and our landscape. It is crucial that that the EPA and other federal agencies recognize this positive effect and not penalize states whose economies rely heavily on sustainable forest management in any future rulemakings."

As the nation seeks to diversify its energy portfolio—even if under pressure from the CPP—the forest products industry has an important role to play moving forward. To that end, the letter concludes, “Federal policies that add unnecessary costs and complexity will discourage rather than encourage investment in working forests, harvesting operations, bioenergy, wood products, and paper manufacturing. Unclear or contradictory signals from federal agencies could discourage biomass utilization as an energy solution.”

As the data have demonstrated repeatedly, investment in our forests results in healthy, productive working forests that stimulate economic growth and opportunity within America’s rural communities. Demand for forest products will continue to drive this needed investment and, in the case of forest biomass, the final product will provide a low-carbon option for expanding the nation’s energy portfolio.

Log Markets
New Markets for Wood Products Help Preserve Forests for Future Generations
There is an ongoing disconnect that tends to resurface in the debate surrounding the use of woody biomass to create the...
END_OF_DOCUMENT_TOKEN_TO_BE_REPLACED

Forest Management
Locking Up Forests For Carbon Storage Not So Clear Cut
Of the 193 million acres of National Forest System (NFS) lands, less than half (45 percent) are unreserved and...
END_OF_DOCUMENT_TOKEN_TO_BE_REPLACED