Brazilian lumber exports have followed a similar trend as exports from other countries over the last decade, which is to say they have slowly crept back up after tanking in the wake of 2008. The US housing market is the primary driver of global lumber flows, and the Great Recession of 2008 had a lingering, widespread effect on these flows, as well as the local markets where lumber is produced in volume. In many areas, current production remains far below pre-recession levels. In the case of Brazil, however, production has been steadily rising and is on course to return to pre-2008 levels.

Since the worst of the international financial crisis began to abate in 2011, Brazilian sawmills increased capacity and exports have increased 63 percent (8.5 percent annually) in value, and 108 percent (13 percent annually) in volume. The Brazilian lumber sector closed 2017 with shipments of $665 million, which is still below pre-recession levels. 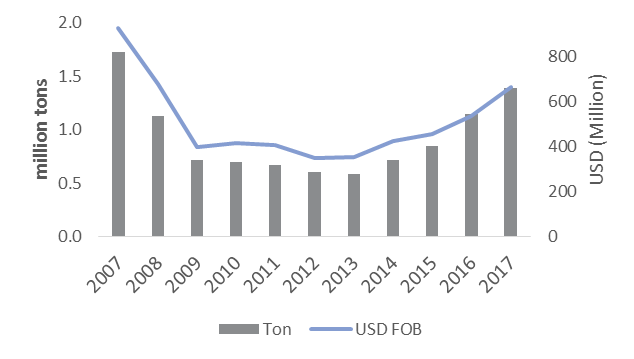 The states of Paraná and Santa Catarina are the primary exporters of Brazilian lumber (Figure 2). These states both contain large areas of planted pine and are thus home to a number of sawmills that rely on these dense stands of pine logs as a raw material. 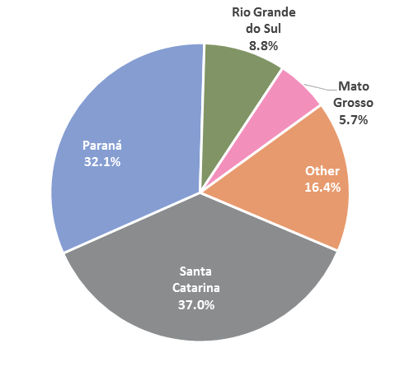 The primary single destination for Brazilian lumber in 2017 was the United States, which imported more than 419,000 tons—just over 500 million board feet (MMBF). Unlike the domestic Brazilian market, lumber and other sawn wood products are highly valued by the US construction and homebuilding sectors. For the purposes of comparison, it’s worth noting that this Brazilian volume is roughly the same as two modern, high-capacity southern yellow pine (SYP) sawmills, which are capable of producing 250-350 MMBF annually. The overall size and scale of the US market is tremendous; it is on pace to consume nearly 50 billion board feet in 2018. 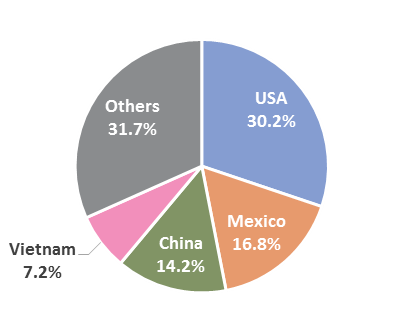 The primary drivers of the continued surge in Brazilian lumber exports include:

With the slow, steady upward performance of both the US and European housing markets and the continuing evolution of global trade disputes, the Brazilian lumber industry is poised to grow by filling gaps in supply. Economists predict that the exchange rate should remain high (above R$3.8/US$1), which favors Brazilian exporters. However, Brazil is in an election year and if recent history is to be a guide, it would be wise to maintain a certain level of caution; political discord has a way of impacting everything from economic development to exchange rates.

Continued demand for the pine resource in Paraná and Santa Catarina will cause log prices to increase in the near term, especially with the contentious trade negotiations taking place in North America. Brazilian lumber producers in these regions must monitor the political situations both at home and abroad in order to properly time their exports and maximize their profit margins.

Timber Prices
How Has COVID-19 Impacted the PNW Forest Sector?
In the Pacific Northwest (PNW), the forest products industry has rebounded somewhat sooner than most believed it...
END_OF_DOCUMENT_TOKEN_TO_BE_REPLACED

Lumber Prices
Are Skyrocketing Lumber Prices a Sign of Things to Come?
If we’ve learned one thing about economic uncertainty during the COVID-19 pandemic, it’s that markets will always...
END_OF_DOCUMENT_TOKEN_TO_BE_REPLACED