The Brazilian pulp market has been very active in 2017. At the beginning of 2Q2017, Fibria—the world leader in the production of eucalyptus pulp—began operating its new production line in Três Lagoas, Mato Grosso do Sul, which increased capacity from 1.3 million to 3.25 million tons of pulp per year. This volume increase has made the Três Lagoas facility the largest pulp mill in the world.

Weeks after the new Fibria line opened, the Brazilian market was again impacted by the entry of a new player. Paper Excellence acquired Brazilian pulp manufacturer Eldorado, which is also located in Três Lagoas. Although Paper Excellence is a Dutch company (with a strong presence in Canada), it is managed by the Widjaja family, which owns Asian Pulp and Paper (APP).

Eldorado started operations in 2012 and had been working on a long-term project to increase the plant's productive capacity from 1.7 million to 4.2 million tons of pulp before becoming ensnared in a scandal and lengthy investigation. The company was acquired during this period, and Paper Excellence will likely continue the expansion project that was started by Eldorado years ago; the expanded facility is expected to be up and running by 2020.

With the acquisition of the Eldorado facility, the Widjaja family has been able to further diversify its portfolio to include a high-output factory with one of the lowest production costs in the world. This will allow APP to be more competitive in Europe and North America.

In addition, a key strategic initiative for the company is feedstock sustainability. The production of pulp from eucalyptus tree farms once occupied by livestock in Mato Grosso do Sul leaves a much smaller ecological footprint than acacia production in newly-deforested areas of Indonesia that include peatland with high-carbon storage capacity.

With these new developments, 2017 has been a very good year for the Brazilian pulp market. International demand remains high and, even with the additional volume being produced by the new Fibria plant, prices continue to rise. Figure 1 shows the comparison of the exported volume of pulp and revenue between January and September of 2016 and 2017. While the volume of exported pulp increased by 4.2 percent, revenue increased by 13.2 percent. After years of negative results, the segment is showing strong signs of recovery. 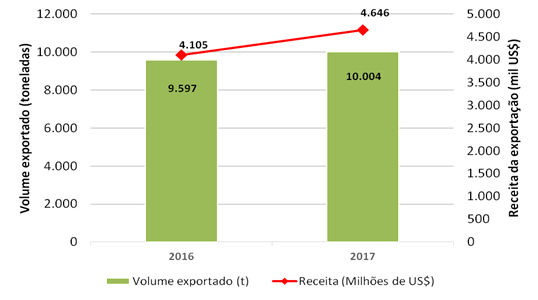 Figure 1 - Comparison of Brazilian pulp exports in the first three quarters of 2016 and 2017 (volume vs. revenue).

All of these factors have created a positive business environment for Brazil’s pulp sector. Higher prices, increasing consumption and the international competitive advantages are leading a number of international companies to actively investigate new investment opportunities in the Brazilian pulp market.

The two major players in the market in 2017 will pave the way. Paper Excellence will need to continue its expansion project if it wants to have the largest pulp manufacturing facility in Brazil, as Fibria is already exploring new growth opportunities in Três Lagoas.

In the “gold rush” of the Brazilian pulp market, Mato Grosso do Sul should maintain its role as the center of this market. Forest2Market do Brasil has analyzed regional forest inventory and age class and forecasted forest growth in the region. The results of this forecast show that there is enough additional supply to sustain a new pulp facility with a capacity of roughly 1.85 million tons.

Global Forest Industry
Effects of the COVID-19 Pandemic on Brazil’s Forest Sector
Some players in the Brazilian forest-based industry are doing well in the face of the economic crisis caused by the...
END_OF_DOCUMENT_TOKEN_TO_BE_REPLACED