As biopower markets in Asia mature, the increased competition for wood pellets and chips will provide opportunities for suppliers of these materials around the globe. Because biomass pellets can be made with low-cost wood raw materials and the cost of shipping is low, the number of potential suppliers is significant. Biopower producers in Japan and South Korea will require a secure and consistent supply of both pellets and chips, sometimes from multiple suppliers in multiple geographies. As a result, they will require strong procurement strategies, supply chain risk assessments, cost analyses, supplier diligence processes and contract negotiation strategies.

This is the third installment of our series on global supply regions that currently, or could in the future, supply Asian biopower markets. Part 1 focuses on the US South, and Part 2 covers the US Pacific Northwest.

In 2015, Canada supplied roughly 14 percent of the wood pellets imported into Asian countries, and it supplied approximately 63 percent of the wood pellets imported by Japan. As Japan, South Korea and other Asian countries increase their production of renewable energy, biomass from Canada’s west coast, especially British Columbia (BC), will continue to play an important role.

Unlike the US, the vast majority (90 percent) of Canadian land is government-owned. British Columbia comprises a land base of 95 million hectares (235 million acres). Crown lands, or lands held by the province, total approximately 88.7 million hectares (220 million acres) and represent 94 percent of total land in the province. Private landowners hold just 5 percent of the land base.

In the Pacific Coast and Montane Cordillera ecozones[i], the Crown holds 93 percent of the 41.9 million hectares (104 million acres) of forest land (Figure 1). Four percent is privately-owned and three percent is owned by the government.

Figure 1 Hectares of Forest Land by Owner Type in the Pacific Maritime and Montane Cordillera Ecozones, BC 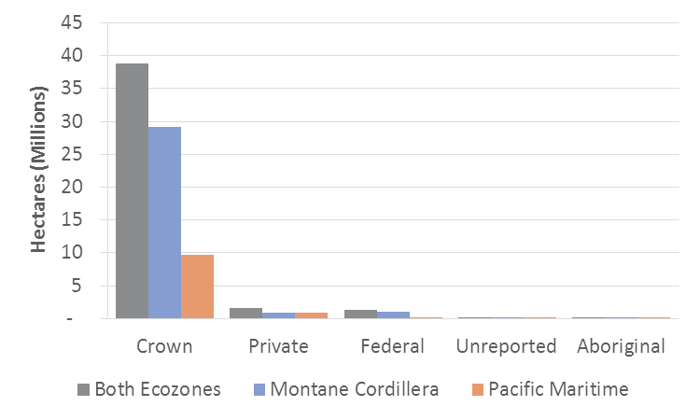 Because most of the usable forest land base is controlled by the provincial government, most harvests come from Crown lands. While around 10 percent of BC's forests are protected, the province allows use of Crown lands through tenure agreements that transfer specific usage rights—such as the right to harvest timber—to private entities subject to specific conditions, including the fulfillment of forest management obligations.

Annual harvest limits (referred to as “allowable annual cut” or “AAC”) are set by the government for each specific forest management unit and then apportioned to tenure holders. Softwood makes up the majority (over 70%) of both supply and harvest. 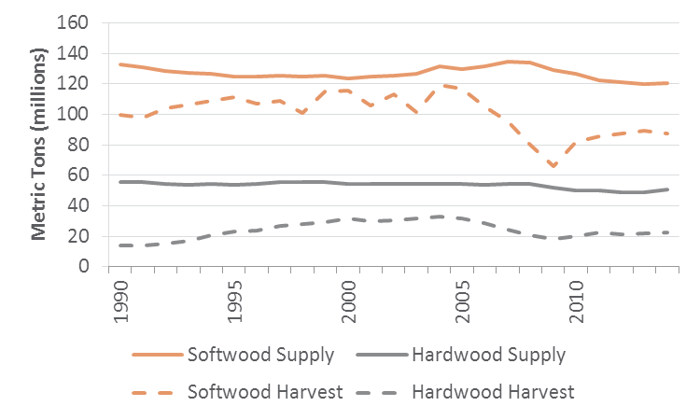 As noted in a separate Forest2Market analysis, AACs in British Columbia are expected to decrease by 15 percent between 2015 and 2035. This will put downward pressure on lumber manufacturers and reduce the supply of residual material produced during the manufacturing process, thereby reducing the supply of residual material available to other producers like pulp and paper mills, as well as pellet mills and bioenergy facilities.

There are around 14 active wood pellet mills in British Columbia producing either industrial pellets that are exported out of the ports of Prince Rupert and Vancouver, and/or heating pellets for domestic or export consumption. In total, BC’s pellet manufacturing capacity is approximately 2.3 million tonnes. Existing pellet mills are located in two regional clusters—one east of the Port of Vancouver in BC’s Southern Interior, and the other east of the Port of Prince Rupert in BC’s Northern Interior. British Columbia’s pellet mills rely heavily on harvest residues and manufacturing residuals from lumber production, and several of the area’s pellet mills are joint partnerships between pellet manufacturers and lumber producers, including Canfor and Tolko.

In addition to pellet mills, the Province also has a healthy supply of chip mills. Several are associated with lumber manufacturers while others are stand-alone operations. In total, chipping capacity is approximately 3.7 million dry metric tons.

British Columbia and the US Pacific Northwest have a higher feedstock cost position than the US South. Because most BC harvests occur on government lands through tenure arrangements, the price for unharvested timber “on the stump” (and associated cost components) differs drastically from the stumpage pricing structure that is prevalent in the US South.

In BC, when timber is harvested from Crown lands, the volume must be reported. The stumpage fee is based on the total harvested timber volume, species and grades that are reported, as well as the stumpage rates that are updated periodically and based on the Harvest Billing System, which is the government’s scale data management and invoicing system. Any business or individual that holds an agreement to harvest timber can also be audited. 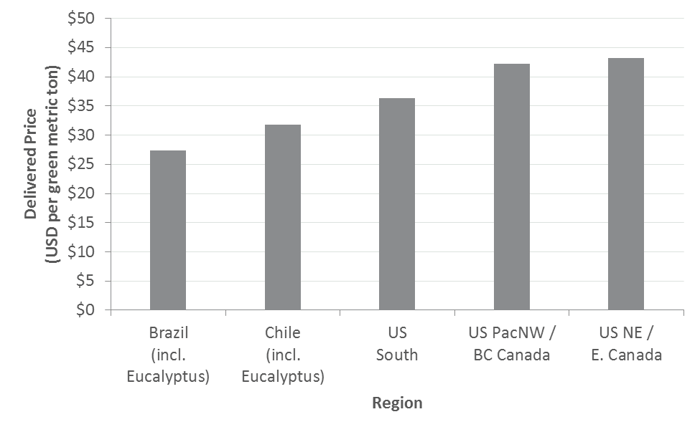 The following table is based upon typical raw material delivered costs to pellet and chip facilities in British Columbia ranging from $37 - $51 per green metric ton ($21 - $98 per dry metric ton). While these raw material costs are higher than those in the US South, the overseas transportation distance is cut roughly in half and is just slightly shorter than the distance from the PNW. Given these large cost drivers—along with other cost variations—BC (like the US Pacific Northwest) is advantaged for exporting both pellets and chips to Asia.

Regardless of location, raw material cost makes up a high percentage of the total delivered price of both wood pellets and chips. The analysis for British Columbia confirms this cost component structure, but it also highlights the importance of the location of the wood source, as the associated transportation costs can have a significant impact on the final delivered price. 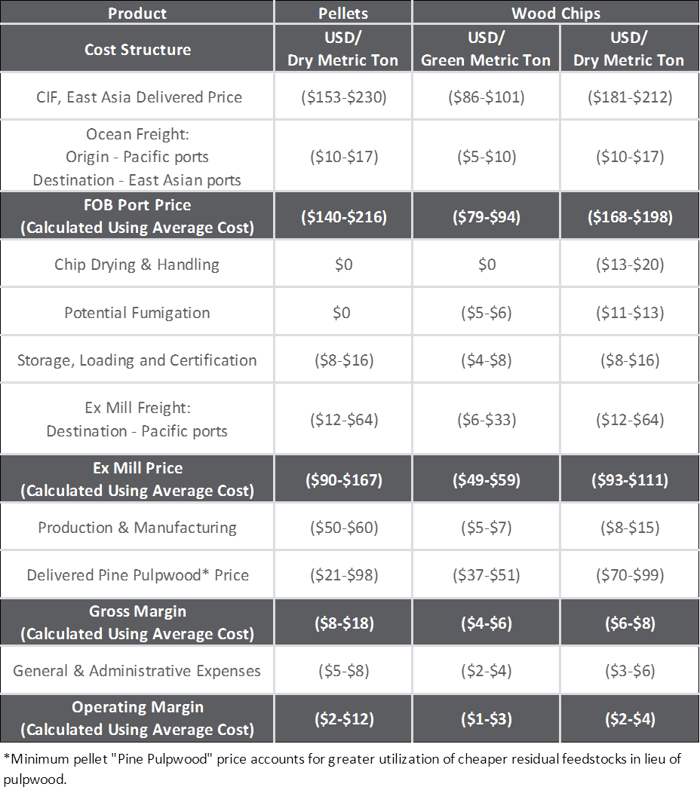 [i] Canada reports its forest inventory by terrestrial ecozone, which do not align with provincial boundaries. Two of these ecozones, the Pacific Maritime and Montane Cordillera, make up the majority of British Columbia with very little overlap with other provinces and they therefore comprise the information we have included for British Columbia’s inventory.