With the recently-announced tariffs on Canadian softwood lumber imports into the US, a lot of unanswered questions are floating around the market: How will the tariffs affect supply in the US? Will manufacturers ramp up production to meet seasonal demand? Will sustained high prices dampen US housing starts during peak building months? Will added costs discourage potential first-time home buyers?

Forest2Market’s lumber data has showed steady price decreases since the new tariffs were announced at the end of April. Prices increased steadily through January and February before peaking at a 12-year high in April—perhaps in preparation for an impending tariff—which could account for the leveling of prices we’re seeing now.

Forest2Market’s data also shows a significant volume increase in #1 and #2 dimension products when comparing January to April. Even if lumber demand and prices were to spike in the coming weeks, the latent capacity at mills and the amount of domestic supply would keep the market from sustaining any kind of long-term price increase.

In March, housing starts declined an unexpected 6.8 percent, with multi-family units declining the most. While April’s decrease was not as severe (-2.6), it was not a standout month to kick off building season. The initial decline in lumber prices could be reflective of the lackluster housing starts numbers, which essentially caused mills to push more inventory to market in anticipation that prices would continue declining after the tariff implementation.

Reaction to the new lumber tariffs from within the forest products industry and beyond has been mixed, as expected. US homebuilders are not the only ones potentially affected by the tariff; it is speculated that single-family home prices will increase at a rate much higher than they have in the recent past. This compounds the challenges for new home buyers—particularly millennials—who are finding household formation increasingly difficult.

There is no question that current lumber prices are still high compared to previous years, but the downward trend—or at least some kind of equilibrium—will likely be the norm over the next few weeks. Until the market adjusts to both the new tariffs and the reaction from the homebuilding industry, producers will continue to operate in an uncertain environment.

A closer look at prices since the beginning of the year: 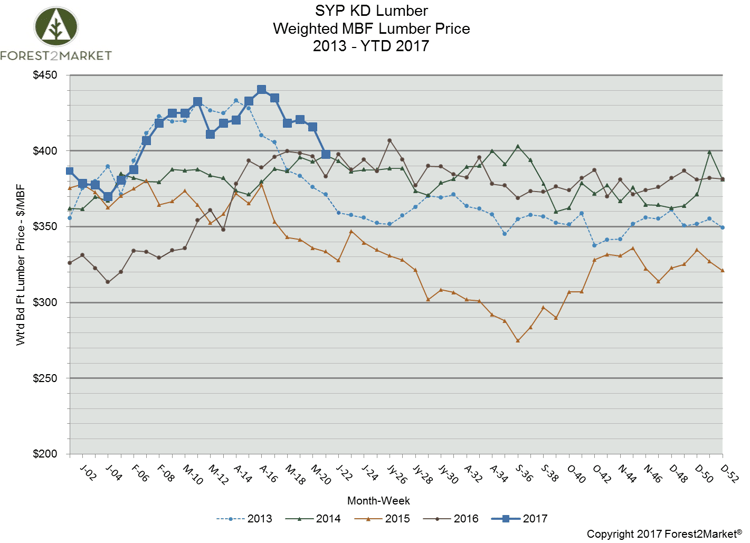 Timber Prices
Southern Timber Prices Continue to Trend Lower in 3Q2022
Following a 15-year peak in 1Q2022 and a sharp decline in prices in 2Q2022, the weighted average price for southern...
END_OF_DOCUMENT_TOKEN_TO_BE_REPLACED

Timber Prices
Halt in Russian Exports, Reduced Demand in China Contributed to a 20% Decline in Global Softwood Log Trade
Global trade of softwood logs plunged by 20% during the first half of 2022 year-over-year (YoY). Much of the decline...
END_OF_DOCUMENT_TOKEN_TO_BE_REPLACED

Timber Prices
Hurricane Ian Threatens Stressed Timber Supply Basin
Hurricane Ian is slated to build significant momentum in the coming days as it crosses the western side of Cuba and...
END_OF_DOCUMENT_TOKEN_TO_BE_REPLACED