CLT and Other Mass Timber Systems Gaining Ground in US

Natives and frequent fliers of Charlotte, North Carolina—home of Forest2Market’s global headquarters—will recognize “CLT” as the airport code for Charlotte-Douglas International Airport and a moniker that the city has adopted for itself. However, CLT also stands for cross-laminated timber, a type of mass timber engineered wood product first developed in the 1990s that is gaining prominence in a sustainability and climate-focused, post-Recession world. The forest products industry, timberland owners, rural communities, “green” builders and environmentalists all have reasons to be excited about CLT and other mass timber products.

CLT is made from layers (usually, 3, 5 or 7) of dimensional lumber stacked in alternating (usually 90°) directions and bonded together. The result is a structural panel that can be used for floors, walls or roofs. 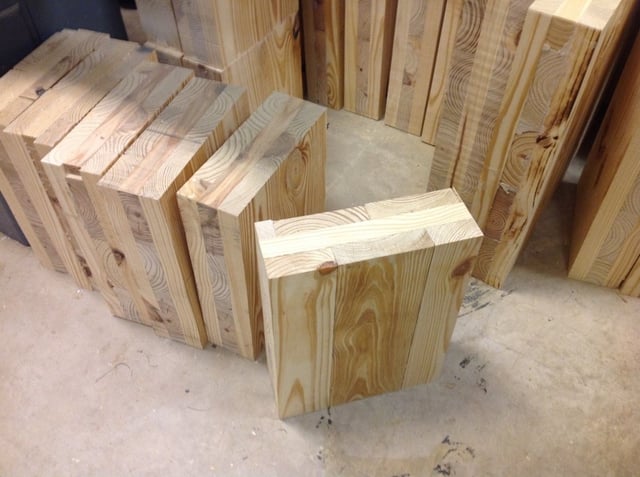 Research and development for CLT began in the early 1990s in Europe.[i] The first production facilities were established in 1994 in the European “DACH” countries (Austria, Germany and Switzerland). Pilot construction projects and national and international technical approvals followed. The term itself was coined in 2000 at the COST E5 conference in Italy. CLT entered the building market in 2005-2010, first in niche markets and later for industrial production.

Today, CLT is an established, albeit new, product. Around 625,000 m3 of CLT was produced in 2014,[ii] approximately 90% of which originated in Europe for both domestic and export markets.[iii] UNECE’s Forest Products Annual Market Review 2014-2015[iv] had the following to say about CLT: "Now, after 25 years of cooperative research and development and internationally showcased CLT-constructed buildings, CLT is firmly established as a new-generation product. The dimensions and lay-up of its production have been standardized, and it is produced in optimized production lines (including the use of post-processing technologies)."

While production is still most concentrated in the European DACH countries, interest in CLT is increasing elsewhere, including North America, Japan, Australia, China, Chile and New Zealand.

The 2015 International Building Code and 2015 International Residential Code now recognize[v] CLT manufactured in accordance with the Standard for Performance Rated Cross-Laminated Timber (ANSI/APA PRG 320), which was approved by the American National Standards Institute on October 30, 2012. The 2015 IBC allows CLT to be used in residential structures up to five stories and certain “heavy-timber” commercial structures up to six stories[vi], including Type VB and IV construction and possibly Type VA, IIIA and IIIB construction.[vii] Wood buildings over six stories must seek approval through an alternative means process. 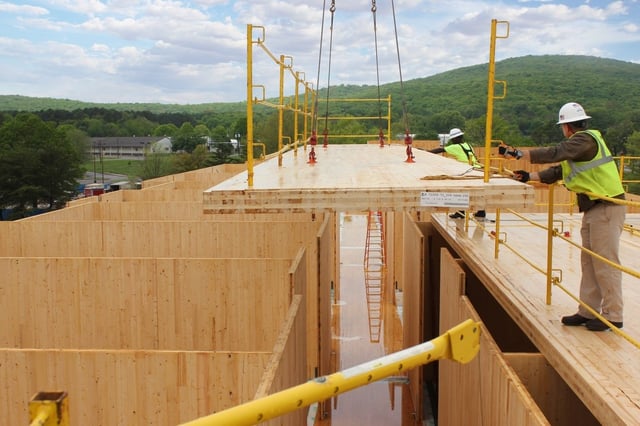 Unfortunately for mass timber, the National Ready Mixed Concrete Association and other allied-industry representatives helped defeat a provision in the preliminary 2018 IBC language that would have allowed the use of CLT in Type IV buildings up to nine stories and several other CLT-friendly provisions. However, the International Code Council Board of Directors has since established a Tall Wood Ad Hoc Committee to study the use of tall wood construction, potentially opening the way for IBC code changes in 2021.[ix]

Since we first covered CLT in 2013, acceptance of CLT in North America has increased, especially in the Pacific Northwest. In the U.S., SmartLam (Columbia Falls, Montana) was the first company to produce CLT. While initially much of their market was for industrial matting, SmartLam has produced architectural grade CLT, which has been independently tested and certified by an engineer, since 2012. In response to increased demand and acceptance of CLT for building applications, SmartLam completed the ANSI/APA PRG 320 certification for CLT in August 2016. In addition to SmartLam, D.R. Johnson of Riddle, Oregon was certified against ANSI/APA PRG 320 in 2015. Two Canadian manufacturers (Structurlam Products of British Columbia and Nordic Structures of Quebec) are certified to ANSI/APA PRG 320 according to the APA’s website. Currently, there are no CLT manufacturing facilities in the U.S. South though research is currently underway to demonstrate the feasibility of Southern Yellow Pine for use in CLT; results so far are promising. 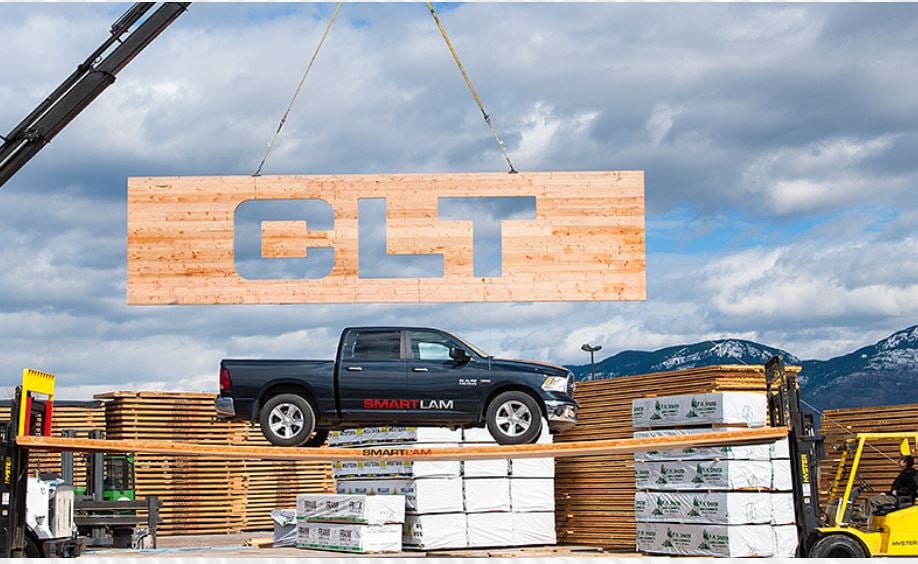 The National Center for Advanced Wood Products Manufacturing and Design (a partnership of University of Oregon and Oregon State University) and the Wood Utilization + Design Institute (Clemson University) are two research entities working with industry and other stakeholders to advance the use of wood building and design. Their research contributes to the growing body of knowledge about the performance, utility and safety of CLT and other forms of mass timber.

Earlier this year, the Timber Innovation Act of 2016 was introduced in both the Senate and House; both bills have been referred to committee. The Act, supported by nearly 100 organizations, would foster research and development about tall wood building construction, create a tall wood building competition, establish a wood innovation grant program and provide technical assistance related to mass timber adoption. The National Stone, Sand and Gravel Association (NSSGA) has opposed the bill.

The Future of CLT and Mass Timber

When the housing bubble of the 2000s burst and the Great Recession drastically reduced housing starts, sawmills closed or reduced output, and demand for sawtimber used to manufacture lumber dramatically declined. In response to reduced demand, landowners delayed sawtimber harvest in order to maximize the return on their investment, creating imbalances in the age class distribution of forests, as our analysis of the U.S. South shows. This in turn has led to a build-up of sawtimber inventories as supply has outpaced demand.

More widespread adoption of CLT and other forms of mass timber in building applications has the potential to stimulate lumber production and provide new outlets for underutilized sawtimber, providing a boon to both the wood products industry and rural communities.  Wood products like lumber, CLT and other mass timber systems continue to store carbon long after the tree was harvested. Furthermore, steel, concrete and brick manufacturing, transport and assembly account for 20 to 30 percent of global fossil fuel consumption.[x] Substituting wood for these materials cuts fossil fuel consumption, stores rather than releases carbon and promotes forest retention. As the world continues to grapple with challenging questions about climate change and the interaction of humans with our environment, forests and forest products will become an ever more important part of the solution. 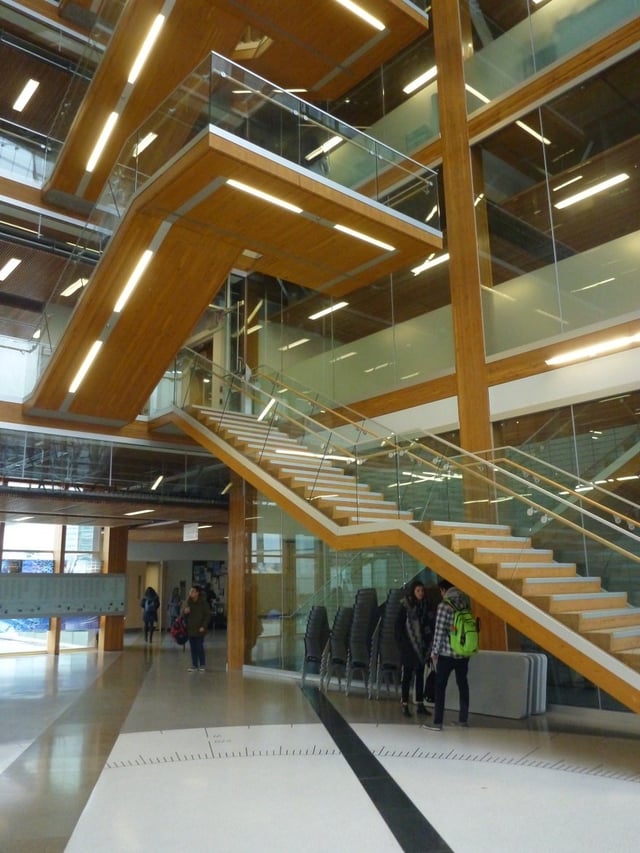 For more information about cross-laminated timber and other mass timber systems, we suggest the following resources:

Timber Prices
How Much Money is an Acre of Timber Worth?
Recent swings in wood fiber demand resulting from the COVID-19 pandemic are vivid examples of the importance of...
END_OF_DOCUMENT_TOKEN_TO_BE_REPLACED

Timber Prices
How Has COVID-19 Impacted the PNW Forest Sector?
In the Pacific Northwest (PNW), the forest products industry has rebounded somewhat sooner than most believed it...
END_OF_DOCUMENT_TOKEN_TO_BE_REPLACED