As we noted in December, two new North American mass timber projects are demonstrating that wood is still an incredibly versatile and reliable building material that will play an important role in the 21st century. New construction projects continue to kick off in 2018, and high-profile, wood-based building technologies are growing in popularity across the globe.

Per a recent article in The Guardian, cross-laminated timber (CLT) and other engineered wood products are growing in acceptance because “it is strong, rigid and durable, insulates both heat and sound, and can be prefabricated in factories to high levels of quality and precision. You can make floors, walls, stairs and lift shafts out of it, stacking up panels like an unusually stable tower of dominos.” These are compelling characteristics that will drive further innovation in wood-based materials.

The benefits also extend from the forest supply chain all the way to the end user or inhabitants of wood-based structures.

Vancouver-based architect and engineered wood products enthusiast Michael Green has a number of CLT and mass timber commercial building projects under his belt, including the seven-story 220,000-sf T3 building in Minneapolis and the eight-story, 97-foot-tall Wood Innovation & Design Centre in British Columbia. Green has proposed building a timber-based 35-story building in Paris, and was the lead architect for Metsä Wood's Plan B project titled “Empire State of Wood” that reimagined an improved wood-architecture version of the iconic NY Empire State Building skyscraper.

Green’s latest proposed project is Riverfront Square in Newark, NJ, which is expected to provide 2,000 residential units, large- and small-scale retail space, cultural and public open space, a hotel, 2 million square feet of office space and parking—all in the heart of downtown Newark. The 11.8-acre site is adjacent to the waterfront and NJ Transit’s Broad Street Station, which can deliver riders to Midtown Manhattan in less than 20 minutes. Riverfront Square will be “anchored” by a 500,000 square foot mass timber office building composed of three interconnected sections of six, eight, and 11 stories. 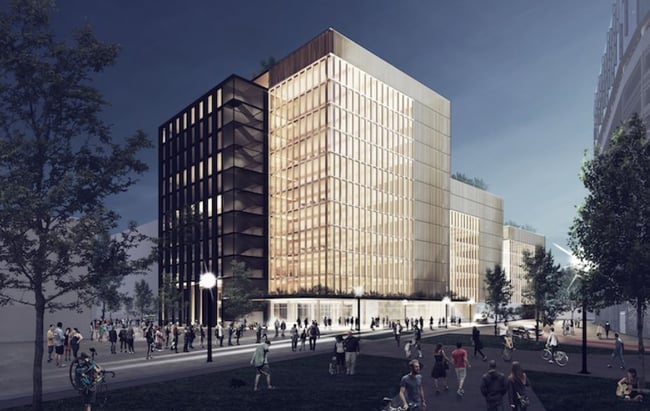 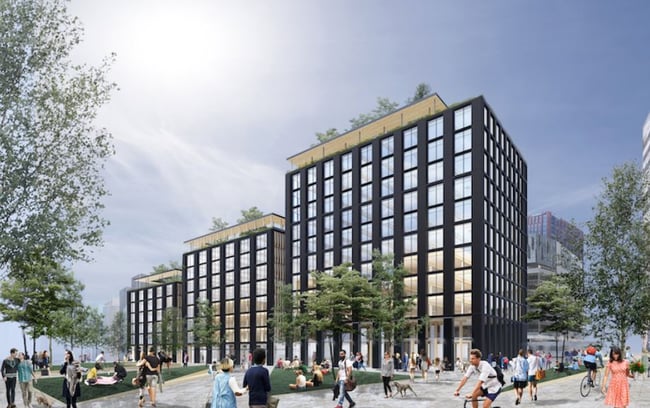 As wood-based projects become more visible, the popularity of these materials will continue to surge. Both Waugh and de Rijke work with commercial clients who now prefer engineered timber because its speed in the construction process saves money. Michael Green says that engineered timber’s primary hurdle is education. As The Guardian piece notes, “There are not enough professionals who understand it, and those who do are too busy to explain it to others. Building regulations in many cities are still wary of it. Timber, he says, needs ‘its Eiffel Tower moment’ that will make everyone realize its possibilities.”

However, that moment may be upon us as the world is expected to use over a million cubic meters of CLT in 2018. Consider the fact that just 2,000 cubic meters were used in 2003, and you get a good idea for the rapid, positive response and potential trajectory these products have in the construction marketplace.

Timber Prices
Where are Southern Timber Prices Headed?
The modern forest supply chain is without guidance for operating in the current pandemic-driven economic...
END_OF_DOCUMENT_TOKEN_TO_BE_REPLACED

Bioenergy
Forest Service Announces Investments in Wood Energy and Innovation
The Guardian recently published a piece supporting the likelihood that the COVID-19 pandemic will have a drastic...
END_OF_DOCUMENT_TOKEN_TO_BE_REPLACED