As the mysterious coronavirus (now dubbed “COVID-19”) continues to spread and confound healthcare systems around the globe, there are signs that some of the world's largest economies are at risk of an economic slowdown as a result of compounding factors.

The most recent Bureau of Economic Analysis (BEA) GDP report had something for both the “glass half full” and “glass half empty” crowds, but “the bottom line is that the economy appears to have successfully sidestepped a more pronounced slowdown that sent ripples of fear through the market last year,” according to  Jim Baird of Plante Moran Financial Advisors.

“Certainly, the economy isn’t firing on all cylinders, but it also doesn’t appear to be at risk of stalling out either,” Baird said.

In light of forecasts by the International Monetary Fund of modest upticks to global growth during 2020 and 2021, Baird is largely correct—particularly as a result of President Donald Trump signing both the Phase 1 trade deal with China and the United States-Mexico-Canada trade deal (USMCA).

Once Canada ratifies USMCA, and if fully implemented, the two trade deals could add as much as 1.7 percentage points (PP) to US economic growth.

However, the coronavirus outbreak and continued threat has roiled industries and the global economy due to supply chain linkages with China. The virus has infected nearly 80,000 people around the world and caused more than 2,600 deaths, mostly in China.

Over the weekend, tangible fears of a global pandemic swelled as coronavirus cases surged in several countries, including Italy, South Korea, and Iran, which is resulting in drastic containment measures.

The outbreak could potentially push the world into recession.

Early estimates regarding the impact to annual-average global GDP growth ranged from -0.1PP to -1.0+PP. However, those forecasts assume the outbreak is soon brought to heel, something that appears less likely.

Even if the virus ultimately doesn’t create a full-scale pandemic, it’s easy to imagine how force majeure disruptions to supply chains (e.g., two-thirds of China’s economy was shuttered for an extra week following the Lunar New Year, and residential areas of Beijing have been locked down) might spawn a banking crisis—perhaps first in the export- and China-dependent Eurozone—that ultimately cascades around the world.

That said, we expect near-term US growth to fluctuate (but remain in positive territory) as the globe struggles to deal with the virus and its aftermath, as well as the associated debt-induced fragility.

In January, the monthly average value of the USD depreciated versus the Canadian dollar (CAD: -0.6 percent) but appreciated against the euro (EUR: +0.1 percent). On the broad trade-weighted index basis (goods and services), the USD lost 0.5 percent against a basket of 26 currencies. The average CAD/USD rate was C$1.309; EUR/USD: €0.901. 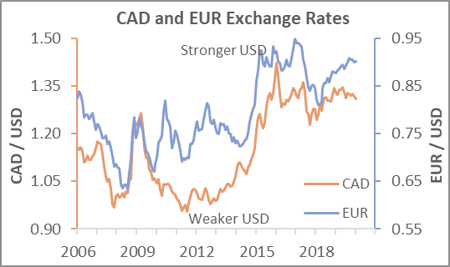 The monthly-average comparison obscures the fact the CAD spent January trending weaker against the USD. That weakening trend is logical given the “temporary setbacks such as the CN Rail strike, pipeline ruptures and the closure of GM’s century-old automotive plant in Ontario—which caused over 2,000 job losses,” wrote FocusEconomics’ analysts.

The USD has remained buoyant against the EUR because recent Eurozone data has been too mixed to give markets confidence in a Eurozone economic rebound, and—more recently—on virus-related safe-haven buying.

Reuters notes: “At the same time, investors are favoring U.S. stocks and bonds, as many expect the U.S. economy to be less vulnerable to a hit from the coronavirus than those in Asia and the eurozone. That has boosted the dollar while sending yields on some U.S. government bonds to record lows.”

Once Canada ratifies USMCA, FocusEconomics sees the Canadian economy “growing at a steady pace this year, with resilient private consumption and a stabilization in the energy sector supporting economic activity. Volatility in commodity prices and elevated household debt pose downside risks to the outlook, however.”

After the coronavirus is dealt with, research firm GfK’s Rolf Bürkl believes the initial agreements in the US/China trade dispute could boost the EUR. In the near term, however, look for the CAD and EUR to essentially trend sideways against the USD.

Global Forest Industry
Effects of the COVID-19 Pandemic on Brazil’s Forest Sector
Some players in the Brazilian forest-based industry are doing well in the face of the economic crisis caused by the...
END_OF_DOCUMENT_TOKEN_TO_BE_REPLACED