Total industrial production (IP) rose 0.5 percent in November (+5.3 percent YoY) to its highest reading since September 2019. The indexes for both manufacturing and mining increased 0.7 percent, while the index for utilities decreased 0.8 percent. Oil production, included in IP’s mining sector, is inching higher in response to rising prices.

The Institute for Supply Management’s (ISM) monthly sentiment survey ended the year on a “down” note, with a smaller proportion of US manufacturers reporting expansion in December. The PMI registered 58.7 percent, -2.4PP from the November reading. (50 percent is the breakpoint between contraction and expansion.) The sub-indexes for input prices (‑14.2PP), slow deliveries (-7.2PP), and customer inventories (+6.6PP) exhibited the largest changes.

IHS Markit’s headline PMIs declined, although more modestly than their ISM counterparts. “December saw another subdued increase in US manufacturing output as material shortages and supplier delays dragged on,” wrote Markit’s Siân Jones. “Although some reprieve was seen as supply chains deteriorated to the smallest extent since May, the impact of substantially longer lead times for inputs thwarted firms’ ability to produce finished goods yet again.” 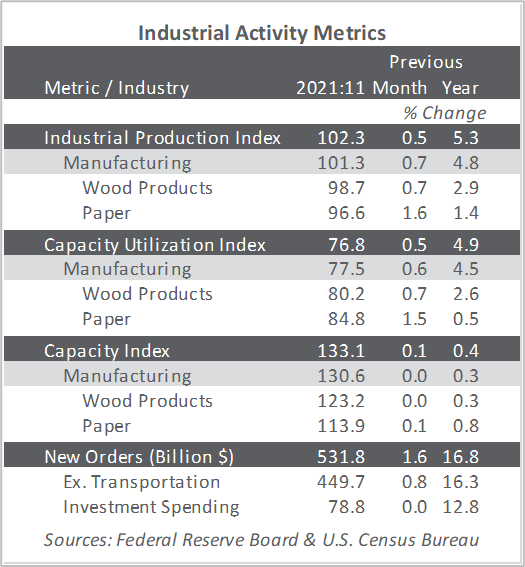 The consumer price index (CPI) increased 0.8 percent (+6.8 percent YoY, a 39-year high) in November after rising 0.9 percent in October. November’s headline MoM increase was again the result of broad increases in most component indexes. The indexes for gasoline, shelter, food, used cars and trucks, and new vehicles were among the larger contributors. The energy index rose 3.5 percent in November as the gasoline index increased 6.1 percent and the other major energy component indexes also rose. The food index increased 0.7 percent as the index for food at home rose 0.8 percent.

Concurrently, the producer price index (PPI) increased 0.8 percent (+9.6 percent YoY, the largest advance since 12-month final-demand data were first calculated in November 2010). The headline index has moved up 0.6 percent during each of the three prior months. Iron and steel scrap exhibited the sharpest rise (+10.7 percent) among the goods indexes in November, while prices for portfolio management (+2.9 percent) led the services indexes.

US forest industry
CPI & Forest Products Sector PPI Continue to Expand
US forest industry performance in February and March was recently reported by both the US government and the Institute...
END_OF_DOCUMENT_TOKEN_TO_BE_REPLACED