“In days of old, logs were sold based on bigger is better. In the days of now, we sell them anyhow regardless of diameter.” The poetry is simple, but it does allude to the fact that as old-growth forests were harvested and as processing equipment evolved and improved, smaller size sawlogs became useable and therefore more common. This trend began in the eastern US and gradually moved west.

It is not uncommon today in the US South for southern yellow pine logs with a small end diameter (SED) of five inches (or even less in some cases) to be processed into solid wood products through the use of highly efficient milling equipment. The primary limitation for whether a small log can be processed is it straightness, and even that can be compensated for to a certain degree by curve sawing.

Has the use of smaller sawlogs in the west grown to be more popular, or has the trend stabilized? In order to take a look at that question, we queried our Pacific Northwest log sale database for the two predominant species/species groups of that region: Douglas fir and hem-fir (hemlock and true firs). Since both types of logs are exported, sold and used domestically, we also examined that data for each individual species and in combination. The charts below illustrate the results. 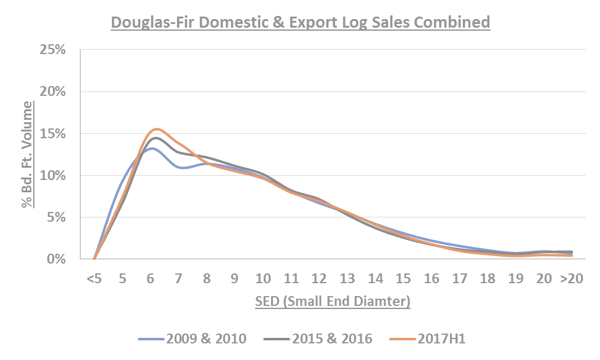 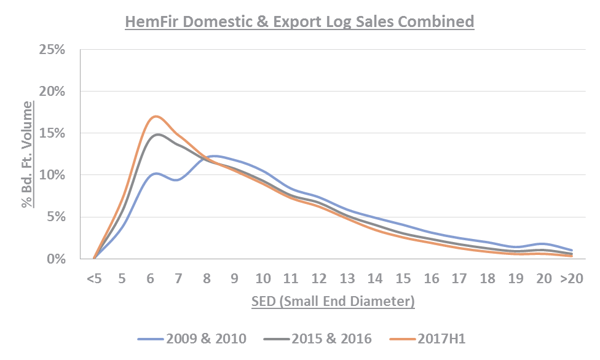 The trend is clear for both Douglas fir and hem-fir when domestic and export logs are combined. Between the first time period (2009 & 2010) and the second time period (2015 & 2016), higher percentages of volume were concentrated at the lower end of the SED scale with reduced percentages at the upper end of the scale. That trend is further accentuated in the first half of 2017. 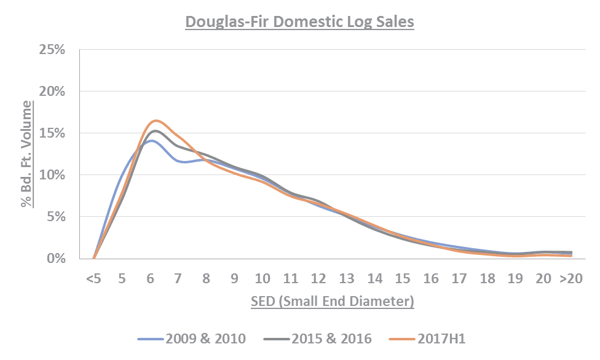 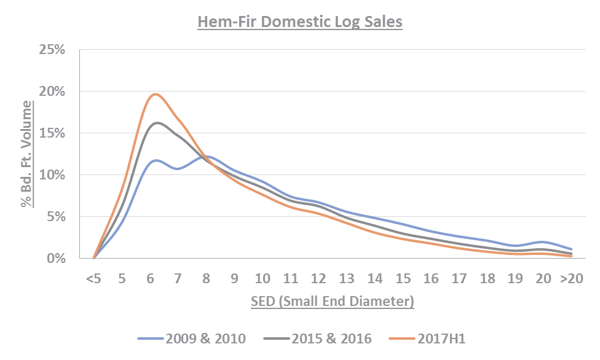 Looking at just the domestic logs, the trend is the same, but it appears to be stronger for hem-fir than for Douglas fir. 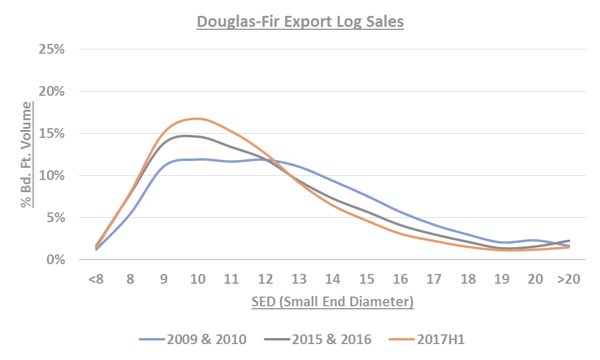 The export charts are interesting for a couple of reasons. First, it should be noted that the SED scale is shortened, starting with logs <8 inches. As you might imagine, export log diameter specs are somewhat more demanding than domestic log specs, due simply to the fact that they are moving over longer distances for processing. The trend for export Douglas fir logs is similar to that for the domestic and combined charts: For the most recent time periods, the percentages of logs in the smaller diameters are higher while the percentages of logs in the larger diameters are lower. For the earlier time period (2009 & 2010), the percentage of small logs is lower. Hem-fir, on the other hand, shows a reverse trend; in the most recent time periods, the percentages of volume in the smaller SED classes are lower, and the percentages for the larger SED classes are slightly higher.

There are several possible reasons for this differentiation. One could be that the demand for Douglas fir remains strong and that those importing the logs are willing to accept a higher percentage of smaller logs, which may not be the case for hem-fir. Another reason might be that the available supply of the larger SED Douglas fir is more restricted than for hem-fir. A third option might be that both demand and supply of larger hem-fir material exists.

Based on the data presented in these charts, it is clear that the trend for smaller sized Douglas fir and hem-fir logs in the Pacific Northwest continues today. However, most mills in the region have been refitted with new equipment to allow for smaller SED logs, and the trend is tapering off since the period of transitioning to these logs is largely complete and high-efficiency, high-output mills have learned to use a much broader assortment of sawlogs.

Timber Prices
How Much Money is an Acre of Timber Worth?
Recent swings in wood fiber demand resulting from the COVID-19 pandemic are vivid examples of the importance of...
END_OF_DOCUMENT_TOKEN_TO_BE_REPLACED