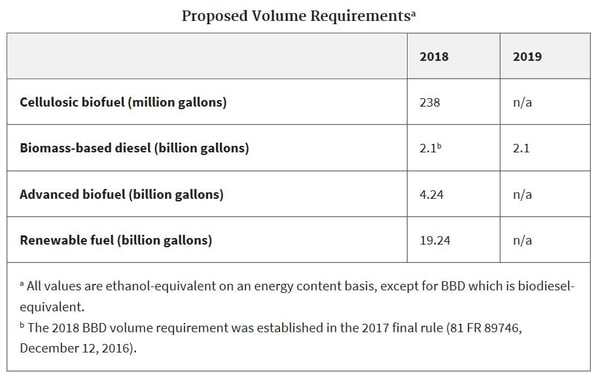 Addressing this reduction in the cellulosic RVO, EPA says “Real-world challenges, such as the slower-than-expected development of the cellulosic biofuel industry, have slowed progress towards meeting Congressional goals for renewable fuels, even as progress has been made in some areas. After careful review of the information before us, for 2018 we propose to use the cellulosic waiver authority provision provided by Congress to reduce the volume requirement for cellulosic biofuel to the projected volume available in 2018, and establish volume requirements for advanced biofuel and total renewable fuel that are lower than the statutory targets, but nevertheless will ensure these renewable fuels will continue to play a critical role as a complement to our petroleum-based fuels.”

Bob Dinneen, President and CEO of the Renewable Fuels Association said, “We are pleased EPA is proposing to maintain the conventional biofuel requirement at the 15 billion gallon level required by the statute, just as EPA finalized in its 2017 RVO. Consumers only see the full benefits of the RFS when EPA implements the policy as intended by Congress. By staying the course and maintaining a strong RFS, consumers will continue to benefit from the policy, including a greater choice at the pump, while breathing cleaner air and seeing a boost to local economies.”

Michael McAdams, president of the Advanced Biofuels Association said, “EPA’s commitment to timely release of the 2018 RVOs is a strong signal of the administration’s support of and commitment to the RFS. The single most important policy driver for the advanced and cellulosic biofuels industries is the Renewable Fuels Standard, and today’s release puts us on track for the 2018 RVOs to be completed by the statutory deadline of November 30.”

However, with a slight decrease in the proposed volumes of total renewable fuels, as well as a substantial decrease in the volume of cellulosic biofuel, one must ask the question: is this sector really making progress? The EPA has consistently scaled back proposed volumes (compared to the initial statutory volumes outlined in the initial RFS) over the last several years as fossil energy prices have remained relatively low. But as we have highlighted in the past, real investment in this sector will come only when the playing fields are leveled and advanced biofuels are better able to compete with (subsidized) fossil fuels.

On one hand, EPA is recognizing “the slower-than-expected development of the cellulosic biofuel industry,” and they have provided an honest assessment and reaction to this reality. On the other hand, the agency is not acknowledging its roll in constraining the market, diminishing new development and investment.

Bob Dinneen also noted that “It is important that the RFS continue to drive investment in new advanced and cellulosic biofuel technologies. We are concerned that by reducing the cellulosic RVO, this proposal may weaken the signal to the marketplace and we want to better understand EPA’s methodology. Still, we believe EPA’s proposal continues our nation on the path of further success for the program and ensures the future growth of ethanol, the cleanest, lowest cost and highest source of octane on the planet.”

In a separate announcement, EPA also announced plans to hold a public hearing on August 1 in Washington, which is designed to provide those interested in or concerned with the latest proposed requirements the opportunity to present their own data and assessments regarding the proposal. Those wanting to testify at the hearing must notify the EPA by July 25.

Bioenergy
The Value of Carbon Emission Avoidance with Biopower Generation
Per a recent report published by the National Petroleum Council (NPC)—an advisory committee that represents the...
END_OF_DOCUMENT_TOKEN_TO_BE_REPLACED

Bioenergy
WSJ’s Incomplete Reporting Perpetuates Misconceptions About Bioenergy
A recent article published in the Wall Street Journal notes that the increased consumption of wood pellets in the...
END_OF_DOCUMENT_TOKEN_TO_BE_REPLACED