In August 2017, I wrote a blog post on the wood fiber market in the Brazilian state of Minas Gerais and concluded that it would face a shortage of wood in the near term. The article hit a nerve within the regional forest industry because the statement contradicted the widely-held, "common sense" belief at the time: that there was a surplus of wood in the Minas Gerais market, and new forest investment in the state would likely not pan out.

In February 2018, I wrote a follow-up piece confirming that the projected increase in the volume of eucalyptus logs in the market was occurring faster than expected, which naturally impacted the price of these logs.

Today, the Brazilian economy continues to recover alongside its national steel sector, which has a significant presence in Minas Gerais, and my forecast from 2017 is more applicable than before. The price of charcoal, as shown below, rose 60% in ten months, reaching R$ 200/mdc[1] at the end of May.

This level of pricing, caused by producers who are waiting for the ideal time to sell, is short term. Charcoal prices should stabilize at around R$ 175/mdc. For comparison purposes, standing eucalyptus timber prices average roughly R$ 60/m3, a 71 percent increase over 2017's price, which averaged roughly R$ 35/m3.

Forest producers in Minas Gerais are encouraged by the current demand and performance in the market, but the situation is less than ideal in Mato Grosso do Sul, which is another important state in Brazil’s forest sector.

The planted forest area in Mato Grosso do Sul grew by nine times in just 10 years. Driven by its involvement in the global pulp market and the construction of two large mills (Fibria in 2009 and Eldorado in 2012), the local government in Mato Grosso do Sul has strongly encouraged forest owners to plant eucalyptus in the state to keep up with demand. Although Fibria's expansion came online in the second half of 2017, the Eldorado facility has not yet come online and therefore has not affected demand in the region. As a result, there are currently 250,000 hectares of eucalyptus plantations in Mato Grosso do Sul that are available to harvest, but there is no guaranteed new demand on the horizon.

While supply is plentiful and demand remains stable, the price of wood fiber in the region has naturally been affected. The chart below shows the change in price of standing eucalyptus timber between August 2016 and February 2018, a period that experienced a 30% drop in price. 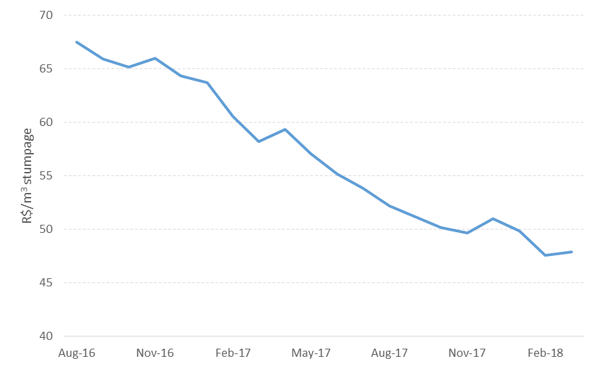 It should be noted that in recent months the value offered by the two pulp mills in the region for new contracts is, on average, R$ 35/m3, showing that the trend in the graph above should continue.

Minas Gerais and Mato Grosso do Sul, the two leading Brazilian states in terms of eucalyptus production, maintain about 40% of the planted area in the country. Interestingly, the price of this wood fiber in Minas Gerais went from R$ 35/m3 to more than R$ 60/m3 in a short period of time, while the price in Mato Grosso do Sul reversed, going from more than R$ 60/m3 to about R$ 35/m3.

Forest industry developments during the second half of 2018 will help to define the overall trend and outlook for eucalyptus prices in both states. In Minas Gerais, the effects of the economic recovery on the price of wood are clear; however, it is important to separate speculation from what is actually happening in the market. In Mato Grosso do Sul, it will be important to follow the development of the Eldorado (Paper Excellence) facility, as well as other companies that are considering growth opportunities in the state, to gain a better understanding of where the market is headed.

[1] MDC represents meters of charcoal, which is the amount of charcoal that occupies one cubic meter, or 1 m³)

Supply chain
Performance Benchmarks Drive Profitability When it Matters Most
You might know the price at which you buy and sell timber, but how do you know whether that price is good or bad...
END_OF_DOCUMENT_TOKEN_TO_BE_REPLACED

Timber Prices
Where are Southern Timber Prices Headed?
The modern forest supply chain is without guidance for operating in the current pandemic-driven economic...
END_OF_DOCUMENT_TOKEN_TO_BE_REPLACED