The European Biomass Association (AEBIOM) recently released its 2017 Statistical Report, which provides an in-depth analysis of the bioenergy sector in the EU28 (European Union) Member States. Each year, AEBIOM is able to produce an increasingly robust report that includes new facts, figures and information, as well as unique data focused on the developments of the European bioenergy market from a growing number of international contributors.

Though much of the data is derived from 2015 and 2016 final numbers, the 300-page report contains more than 150 graphs and figures covering all EU28 countries. AEBIOM has also made an abbreviated “key findings” report available that contains general data and conclusions related to bioenergy’s role in the EU28 for a broad audience. Highlights include:

Focus on the Forest

The key findings of 2017 contain a section titled “Biomass landscape - A focus on Forest,” which includes data pertaining to the status and overall health of European forests.

“Contrary to common belief, EU28 forests have been steadily growing over the past decades. In 1990 European forests represented a total of 19.7 billion [metric tons] m3” says the report. “In 2015, EU28 forests reached 26.5 billion m3, meaning that forest stock increased by 32% over the last quarter of a century.” This growth is due to two primary reasons: forest areas increasing and a growth of standing volumes. 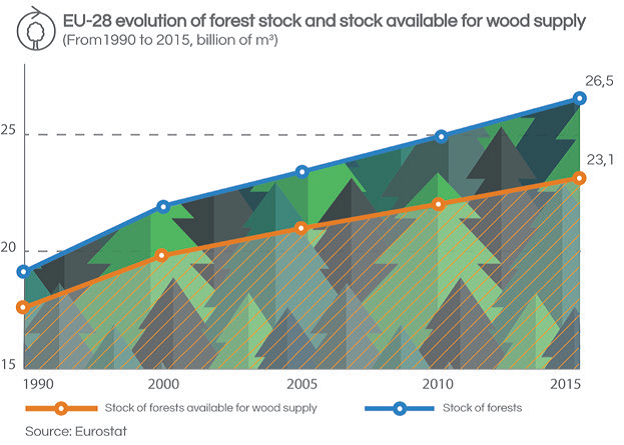 “Investments by European countries have already resulted in a very positive trend in the development of forest area and resources,” said Piotr Borkowski, Executive Director of The European State Forest Association (Eustafor). “Over the past 25 years, the growing stock of European forests has increased by 7.3 billion m³, whereas the stock available for wood supply has grown by more than 5 billion m³. Furthermore, only about 63% of the annual increment is used, allowing for additional availability for the future. These figures are promising for the shift towards a European bioeconomy.”

The 2017 report also includes a section titled “A focus on the pellet market” that provides in-depth analysis of the change in this market over the last decade, including: 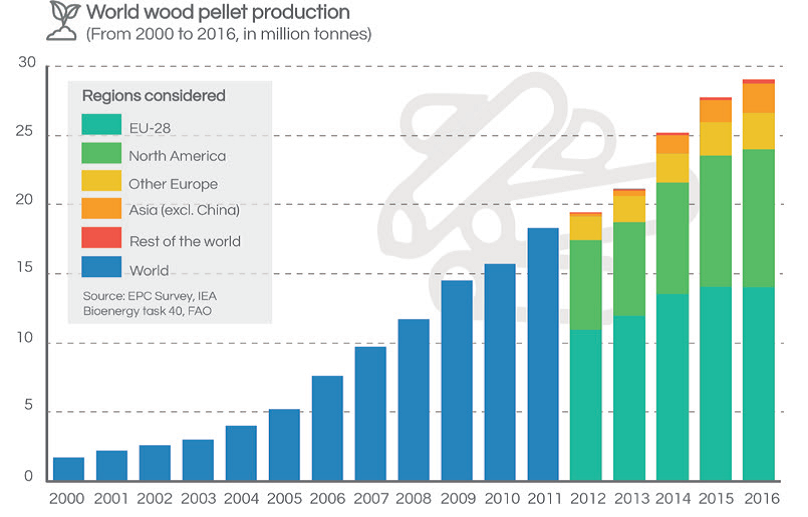 The percentage of wood harvested for use as a feedstock in the creation of bioenergy increased from 18 percent in 2000 to 22 percent in 2016, which is roughly one fifth of the total harvest in the EU28. While the consumption of bioenergy has surged in Europe since 2000, the energy sector is not the main driver for forest owners to utilize their forest resources as the bioenergy sector relies mainly on wood by-products and other types of biomass.

“While growth rates seem positive, it is still a fact that pellet boilers play a marginal role in the commercial heat market,” said Christian Rakos, Managing Director of ProPellets Austria. “Energy costs for most companies are small compared to overall operational costs and have declined in recent years. The perception of risk associated with the change to a different fuel is also a barrier. To overcome these barriers, ESCO, Energy Service Companies, are key but are probably not enough today to give a big push to the growth in the commercial heating sector. In Austria we have conducted several campaigns to promote the use of pellets in commercial heat applications. The success was very limited and our conclusion is that this will not change until prices for fossil fuels rise significantly as a result of CO2 taxation.”

Bioenergy
The Value of Carbon Emission Avoidance with Biopower Generation
Per a recent report published by the National Petroleum Council (NPC)—an advisory committee that represents the...
END_OF_DOCUMENT_TOKEN_TO_BE_REPLACED

Bioenergy
WSJ’s Incomplete Reporting Perpetuates Misconceptions About Bioenergy
A recent article published in the Wall Street Journal notes that the increased consumption of wood pellets in the...
END_OF_DOCUMENT_TOKEN_TO_BE_REPLACED