Despite the tremendous drop in oil prices over the last year and the subsequent appeal of fossil fuels for energy, the cellulosic and advanced biofuels sector is forging ahead with support from a global industry that consumes massive quantities of fuel. As we have noted, the aviation industry has demonstrated a commitment to reducing its emissions and reliance on fossil fuels by expanding its energy portfolio to include more fuels manufactured from renewable resources. To provide some insight into the volume of fuel this industry consumes, the US air transportation sector alone used over 16.7 billion gallons of fuel in 2015.

Global delivery giant FedEx, which operates a fleet of over 600 aircraft, recently announced a number of corporate initiatives via its 2016 Global Citizenship Report that include new environmental goals of “connecting the world responsibly and resourcefully.” In the report, FedEx notes that it has entered into an agreement with Colorado-based Red Rock Biofuels to purchase alternative jet fuel made from wood waste, which will support the company in its goal of procuring 30% of its jet fuel from alternative sources by 2030.

Other FedEx corporate environmental initiatives and milestones noted in the report include:

FedEx founder, chairman, president, and CEO Frederick Smith said, “As a heavy user of fossil fuels, we know how important it is to reduce our consumption and make trade-related energy more sustainable. We’re proud to work with this innovative company [Red Rock Biofuels], which converts scrap and forest waste to make fuel. The process contributes to smart forest management practices that reduce the intensity of forest fires. Innovations like this have the potential to help farmers and communities around the world turn waste into a new form of clean energy. Helping others replicate a waste-to-biofuel model could create sustainable local industries and new jobs near airports around the world.”

FedEx also noted that advanced technology will play a critical role in reducing the company’s emissions going forward. The Global Citizenship report also reveals that FedEx invested in expanding its alternative-fuel vehicle fleet to almost 1,900 in 2015, just under twice the amount of the previous year. 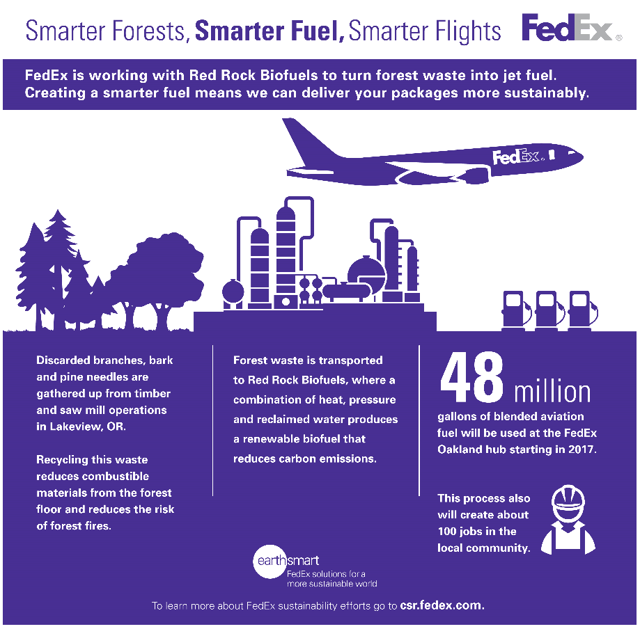 Red Rock Biofuels is developing refineries in the US to convert woody biomass to renewable drop-in jet, diesel and naphtha fuels. Each refinery will consume 175,000 dry tons of woody biomass feedstock to produce 16 million gallons of finished products annually. For the FedEx partnership in particular, Red Rock’s low-carbon biofuel will power aircraft based at FedEx’s Oakland, CA hub, and the wood waste will be supplied by a sawmill company in Lake County, Oregon that sustainably manages over 100,000 acres of forestland.

Dan Shoun, a Lake County, Oregon Commissioner, who spent over 30 years with the USDA Forest Service, sees wood-based biofuel as an ideal model to reduce wildfire risk, support communities and provide low-carbon fuel for a major international carrier. He notes that “Excess forest debris is a huge contributor to these catastrophic wildfires. It puts all forest activities at risk — timber, recreation, wildlife management, water use. In Lake County alone, we have around 400,000 acres of dead trees. In 2012, a 95,000-acre fire just outside Lakeview devastated our community. People lost their retirement investment when their land burned. Thinning wood is very costly and the material had no value, no market. That’s why it’s a blessing that Red Rock Biofuels is now building a plant here to turn wood waste into jet fuel. Lake County is supporting them every way we can.”

FedEx’s Oakland hub is also a site that prides itself on environmental leadership, per Oakland Hub Director, Robin Van Galder. “We’re an important regional hub. We have 1,700 employees and sort and distribute approximately 300,000 packages a day, with daily operations consisting of 35 aircraft and 160-170 trucks. It makes sense to test and implement cutting-edge things here that set standards for other FedEx locations and airlines.”

Red Rock chief executive Terry Kulesa noted that, “FedEx is saying to airlines and the financial sector that this is the future of aviation fuel. We hope to build about 10 more plants in the next few years.”

In January 2016, Red Rock Biofuels was acquired by Joule, which develops technology platforms for the production of sustainable, drop-in, ultra-low carbon transportation fuels. Joule is privately held and operates from Bedford in Massachusetts, Fort Collins in Colorado, and The Hague in The Netherlands with production operations in Hobbs, New Mexico and in Lakeview, Oregon.