Forest industry performance in December 2016 and January 2017 was recently reported by both the US government and the Institute for Supply Management.

Total industrial production (IP) rose 0.8 percent in December (+0.5 percent YoY—its first “plus sign” in more than a year), mainly from colder weather prompting a 6.6 percent gain in utilities (the largest surge since December 1989). For 4Q as a whole, however, total IP receded at an annualized 0.6 percent rate. In December, manufacturing output moved up 0.2 percent.

The Institute for Supply Management’s (ISM) survey showed that the pace of expansion in US manufacturing continued accelerating during January. The PMI rose by 1.5 percentage points, to 56.0 percent (50 percent is the breakpoint between contraction and expansion). The concurrent pace of growth in the non-manufacturing sector slowed fractionally, to 56.6 percent. Input price increases were the most widespread since January 2005 (PMI) and July 2014 (NMI). Paper Products and Construction expanded, while Wood Products and Real Estate contracted. 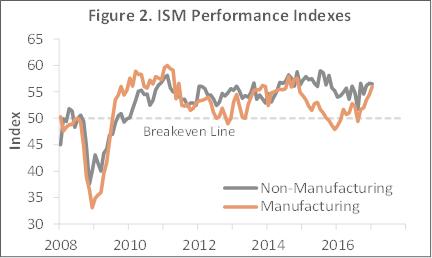 The consumer price index (CPI) increased 0.3 percent in December. Continuing their recent trends, the shelter (rent: +0.3 percent) and gasoline (+3.0) indexes increased in December and were largely responsible for the MoM all-items increase.

The all-items index has been steadily rising on a YoY basis since July, and December’s 2.1 percent was the largest 12-month jump since June 2014. Energy (+5.4 percent), rent (+4.0 percent) and medical services (+3.9 percent) were among the biggest contributors to the YoY acceleration.

Meanwhile, the producer price index (PPI) increased 0.3 percent (+1.6 percent YoY). Nearly half of December’s MoM advance can be traced to a 2.6 percent climb in the energy index, most of which originated with a 7.8 percent rise in the gasoline index. All of the forest products-related PPIs we track increased in December:

US forest industry
Strategic Planning During Downturns with Precise Market Data
It’s difficult to overstate the uniqueness of the current global health (and economic) crisis we find ourselves in....
END_OF_DOCUMENT_TOKEN_TO_BE_REPLACED