Forests and the Forest Products Industry Are Sustainable in Western Tidewater

A recent article in the Tidewater News asks the question, “Is the wood product industry sustainable in Western Tidewater?” The question is an important one. The forest products industry is not sustainable if wood supply dries up, and no one understands the significance of this better than the forest products industry. Unfortunately, the answer provided in this article falls short of providing a complete and therefore accurate picture of Southampton County’s forest resources and their long-term sustainability. Instead of trying to answer this question directly, the article suggests that only one segment of the forest products industry, wood pellet manufacturers, is responsible for a lack of sustainability.

The article begins by recognizing that demand for wood pellets is driven by European markets. Reporter Andrew Lind repeats the argument produced by Justin Scheck of the Wall Street Journal that UK laws governing harvests are so strict that they must rely on supply from the US South, where no laws govern harvests. The facts show, however, that harvests in Virginia have a high rate of compliance (88.6%) with best management practices that are based in part on requirements defined by the Clean Water Act (Chapter 10 of this document summarizes the Regulations and Legislation that do exist in Virginia). In addition, the UK and EU are both implementing sustainability requirements that US pellet manufacturers will be required to meet.

Fact Check: Harvested Acres—Regardless of Reasons—Not a Measure of Sustainability

Lind states, “in the four years prior to [wood pellet manufacturer] Enviva’s arrival, an annual average of 7,416 acres were harvested across the county and used by Franklin Lumber and International Paper [IP]. That number increased by more than 1,200 acres in the company’s first full year in the area.”

While the actual numbers cited here seem realistic, the reasons do not. Let’s look at the facts:

Given these changes in demand, it seems very likely that there would be an increase in the number of harvested acres in 2014, and the 1,200 additional acres seems a reasonable number considering that the combined demand of both a new sawmill and a new pellet mill entered the system.

The fact that more acres were harvested, in and of itself, however, does not speak to the issue of sustainability.

Finally, the article cites two sources with contradictory views of the end market for pellets. First, is the Dogwood Alliance’s Scott Quaranda, who argues that the industry is “short-lived” and “finicky.” Second is from Scheck’s article in the The Wall Street Journal, which states that European consumption of wood pellets will nearly double by 2020 from 6.7 million tons in 2012. Both things cannot be true. If Quaranda is right, why would pellet manufacturers make the type of capital investments currently being made in new facilities? If Scheck is accurate and a pellet manufacturer expects to be in business by 2020, why would the company knowingly create a situation where they would deplete their primary raw material resource?

Let’s Answer the Question the Article Does Not: Is the Industry Sustainable?

Let’s start with the number of harvested acres in Southampton County. Figure 1 illustrates the trend in forested acres between 2005 and 2013. The most recent year that data is available from the Forest Inventory Analysis (FIA) conducted by the US Forest Service shows the 246,000 acres that Lind references. 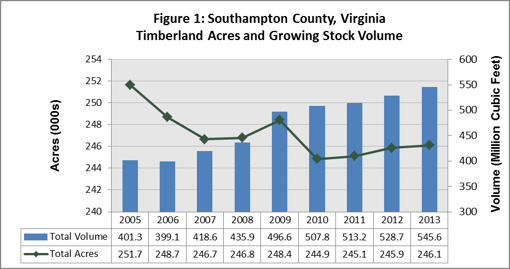 This data from the FIA shows not that the number of acres has been increasing since 2011. While the number of acres of timberland decreased as the housing market collapsed and timber prices fell, that trend has been slowly reversing. As the housing market improved and timber prices began to recover, the number of forested acres in the county has increased. The fact that forested acres are beginning to trend higher once again indicates either that landowners are replanting after final harvests, that land is being converted from farm to forest, or both.

Figure 1 also shows an alternative view of the forest that takes into account the fact that trees grow and increase in volume on a continuous basis. In Southampton County, total volume increased from 401.3 million cubic feet in 2005 to 545.6 million cubic feet in 2013, a gain of 36 percent. This increase is one of two accepted measures of sustainability in forestry. It indicates that supply is more abundant and that forested acres are more productive today than they were in 2005.

The second accepted measure of sustainability in forestry is a comparison of annual growth to annual harvest volumes. Figure 2 shows both growth and harvests in Southampton County. 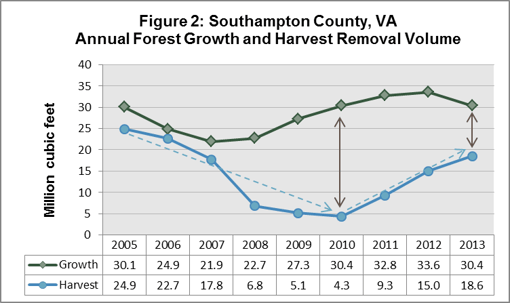 As this graph details, since 2005, harvest volumes have never exceeded forest growth in a year. In fact, we can pinpoint the years 2008-2013 as the origin of the significant increase in volume in the same period (Figure 1), as growth was far above harvest volumes. Figure 2 also indicates that an additional 11.8 million cubic feet of timber could have been harvested in 2013 without any negative effect on forest resources.

Another way to look at this is by calculating the “growth-to-removals ratio.” Figure 3 shows the actual growth-to-removals ratios for Southampton County from 2005-2013. A ratio of 1.0 indicates supply and demand are in balance; a ratio of less than 1.0 means that demand is outpacing supply and that harvest volumes are not sustainable in the long term; a ratio greater than 1.0 means that the current level of demand is sustainable, since growth of the supply base is higher than demand. As this chart details, even when demand was at its highest (2005), consumption of wood in Southampton County was sustainable. 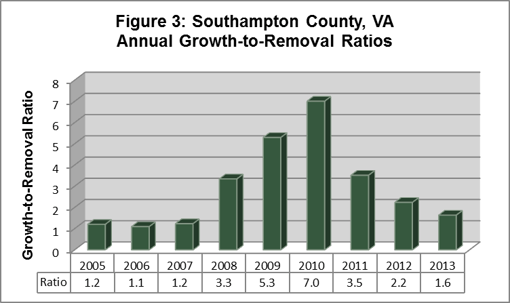 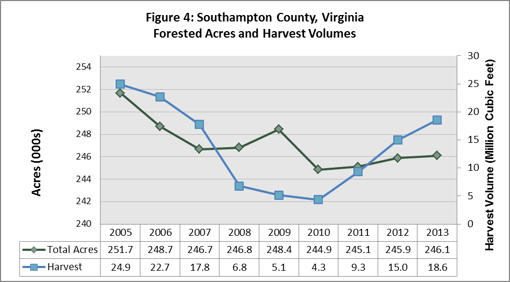 What effect has the industrial wood pellet industry really had on timber markets and timberland in Southampton County? It is too early to answer that question definitively, as FIA data for 2014 is not yet available. Timberland acres in the county declined prior to the arrival of new entrants, however, because in the absence of an economic environment where trees have value, timberland acres will decline and be converted to real estate or some other type of crop. And when trees are in demand and have higher values, landowners make the decision to invest by replanting or regenerating and/or converting other unproductive or unprofitable lands to forests. This economic incentive will produce additional forested acres. Given this fact, the presence of an industrial wood pellet manufacturer—or any other wood consumer—is more likely to be a benefit to forests in Southampton County.

Misinformation about forest resources—like that contained in Lind’s article—harms both local timber growers and consumers. Moreover, such distortions do a disservice to the rural communities—like those in Southampton County—that rely on forests and forest products industries for continued economic opportunity.