Forestry-related industry performance for the latter part of March and the month of April remained largely unchanged over February data in both the manufacturing and non-manufacturing sectors.

Total industrial production (IP) decreased 0.6% (+2.0% YoY) in March, more than undoing February’s 0.1% gain. For 1Q2015 as a whole, IP declined at an annualized rate (AR) of 1.0%, the first quarterly decrease since 2Q2009. The 1Q2015 decline resulted from a 60% (AR) drop in oil and gas well drilling and servicing, and from a 1.2% decrease in manufacturing production. Performance of major sub-groups was as follows:

The Institute for Supply Management’s (ISM) monthly opinion survey indicated that growth of activity in the U.S. manufacturing sector was unchanged in April. The PMI registered 51.5%, the same reading as in March (Figure 2) and its lowest level since May 2013. (50% is the breakpoint between contraction and expansion.) The most apparent changes included increases in the new orders, exports and imports sub-indexes and contraction in employment (Table 3). 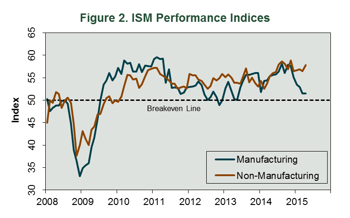 The pace of growth in the non-manufacturing sector quickened in April. The NMI registered 57.8%, 1.3 percentage points above the March reading of 56.5%. The business activity sub-index rose noticeably, and new orders slightly less so. However, exports contracted (collapsing from 59 to 48.5%) and import growth markedly slowed.