Forestry-related industry performance in both the manufacturing and non-manufacturing sectors for the latter part of June and July followed the marginally up/down trend that it has maintained for most of 2015.

The Institute for Supply Management’s (ISM) monthly opinion survey showed that growth of economic activity in the U.S. manufacturing sector slowed in July (Figure 2). The PMI fell 0.8 percentage point, to 52.7% (50% is the breakpoint between contraction and expansion). Notable changes included a slowdown in employment growth, shrinking inventories, order backlogs and exports, and declining input prices (Table 3). 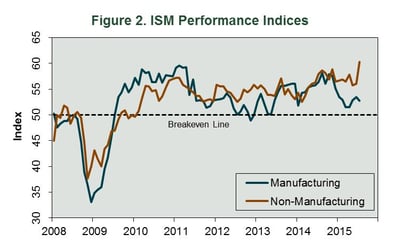 Wood Products contracted, dragged down by declines in production and orders. Paper Products expanded, with broad-based support among the sub-indexes.

Unlike manufacturing, the pace of growth in the non-manufacturing sector hit its highest level in July. The NMI jumped 4.3 percentage points, to 60.3%. The sub-indexes were higher virtually across the board. Real Estate and Construction also reported expansion in July.

US forest industry
Strategic Planning During Downturns with Precise Market Data
It’s difficult to overstate the uniqueness of the current global health (and economic) crisis we find ourselves in....
END_OF_DOCUMENT_TOKEN_TO_BE_REPLACED