Forestry-related industry performance for the latter part of April and May was mixed over March data in both the manufacturing and non-manufacturing sectors.

Total industrial production (IP) decreased 0.3% (0.0% expected) in April, its fifth consecutive monthly loss. At 105.2% of its 2007 average, total IP was 1.9% above its April 2014 level. Manufacturing output was unchanged in April; March was revised from +0.1% to +0.3%. The fall-off in oil and gas well drilling caused a 0.8% drop in mining output (its fourth consecutive monthly decrease) in April; the output of utilities also declined 1.3%. Performance of major sub-groups included:

The Institute for Supply Management’s (ISM) monthly opinion survey indicated that growth of activity in the U.S. manufacturing sector quickened slightly in May (Figure 2). The PMI rose 1.3 percentage points, to 52.8%. (50% is the breakpoint between contraction and expansion.) Virtually all sub-indexes were higher in May (Table 3), but the most obvious change was a substantial moderation in the pace of input price decreases. 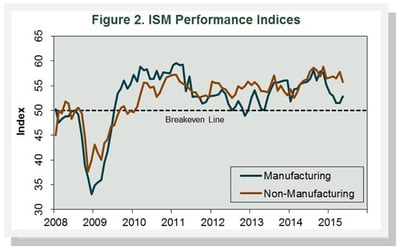 While Paper Products expanded amidst widespread support in May, Wood Products was unchanged. After essentially trading flat since mid-April, the July lumber futures contract abruptly increased by $26/MBF (10.5%) between mid-May and the first week of June. We suspect the price rise reflected stronger demand from April’s housing start surge, and supply disruptions from wet weather across the mid-South (particularly Texas).

The pace of growth in the non-manufacturing sector slowed in May. The NMI dropped 2.1 percentage points to 55.7%.

US forest industry
US Labor Market Wraps Up 2019 With a Bang
Every month, Forest2Market publishes updated forecasting products designed specifically for participants in the...
END_OF_DOCUMENT_TOKEN_TO_BE_REPLACED