Industrial production (IP) was positive in November. Total IP increased 1.3% (+5.2% YoY), the biggest month-to-month rise since May 2010 and well above expectations of +0.7%. In addition:

Capacity at the all-industries and manufacturing levels moved higher by, respectively, 0.3 and 0.2%. Wood Products extended its ongoing (since July 2013) upward trend, increasing by 0.4%. Paper capacity, on the other hand, contracted by 0.2% to another new low.

The Institute for Supply Management’s (ISM) monthly opinion survey suggested that growth of economic activity in the U.S. manufacturing sector slowed markedly in December, missing expectations by the most since January. The PMI slid from November’s 58.7% to 55.5% in December (Figure)—its lowest value since June. All sub-indices except employment and slow supplier deliveries were lower in December (Table). 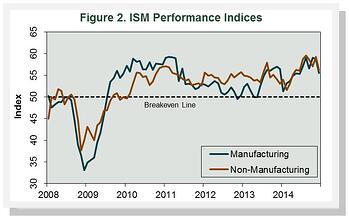 Wood Products contracted, as virtually all reported changes in the sub-indices pointed to slower activity. Paper Products’ expansion, by contrast, was tarnished only slightly by falling export orders.

The pace of growth in the non-manufacturing sector also slowed in December. The NMI registered 56.2%, 3.1 percentage points below November’s 59.3%. It was the biggest miss to expectations since September 2013, and the lowest value since June. The sub-index values were lower “across the board” in December.

Further confirmation of a December slowdown came from Markit’s U.S. Manufacturing and Services PMIs. “[Manufacturers] are citing greater uncertainty about the outlook, especially in export markets,” said Chris Williamson, Markit’s chief economist, “leading to some scaling back of expansion plans and a greater reluctance for customers to place orders compared to earlier in the year, which suggests a slowdown could become more entrenched unless demand revives.” Capping off 4Q2014, Williamson said, “[Markit’s] PMI surveys suggest the pace of U.S. economic growth slowed in 4Q” to perhaps 2%.

US forest industry
Strategic Planning During Downturns with Precise Market Data
It’s difficult to overstate the uniqueness of the current global health (and economic) crisis we find ourselves in....
END_OF_DOCUMENT_TOKEN_TO_BE_REPLACED