The housing market recovery strengthened toward the end of 2012, the result of strong residential construction, higher home prices and new, existing and pending home sales numbers that continued to rise in November. 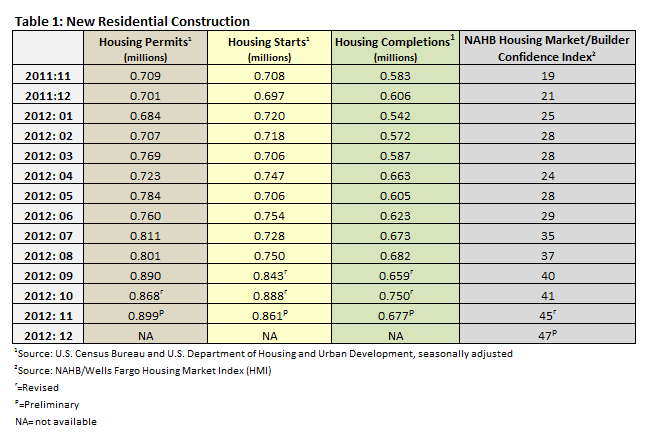 In November, the U.S. Census Bureau and Department of Housing and Urban Development reported that new residential home sales increased by 4.4% month over month (15.3% higher than for the same period in 2011), bringing inventory to a 4.7 months' supply at the current sales rate. They also reported a steep increase in new home prices, up nearly $9,000 to $246,200 (Table 2). 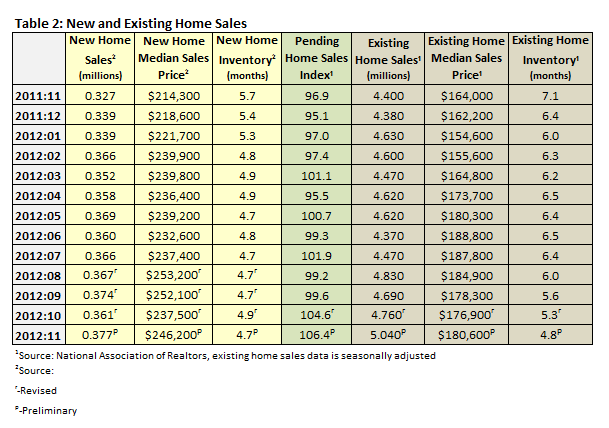 Existing home sales also continued to improve, increasing 5.9% in November to 5.04 million homes. Inventory, at the current sales rate, stands at 4.8 months. The National Association of Realtors also reported an increase in home prices, up 10% from one year earlier to $180,600. The pending home sales index rose 1.7 percent to 106.4 in November (Table 2).

The S&P Case-Shiller index confirmed that home prices are showing signs of sustained recovery. Data through October 2012 show that home prices have increased by 4.3% from October 2011 prices. From January - November 2012, home owner equity has risen by $760 billion, a result of improvements in home prices, according to the National Association of Realtors.

Mortgage rates remain low, according to both the Mortgage Bankers Association (Table 3). 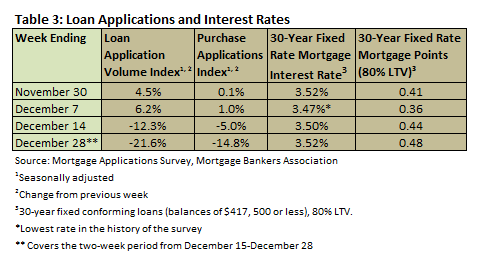 Thanks for the articles.  Lots of facts here, but I am interested to know if the rate of cutting is keeping up with the rate of forest growth yet.  Said differently have we yet found supply demand balance or is that still a ways away?  Our timber operation is in east Texas.  It seems the housing market could not be too much more robust here with both single and multi-housing projects devouring wood, but it does not seem to be reflected in pricing.

Housing Market
US Housing Starts Reach13-year High in December
Talk about a well-timed (if late) Christmas gift for the US economy. Housing starts skyrocketed to a 13-year high in...
END_OF_DOCUMENT_TOKEN_TO_BE_REPLACED

Housing Market
November Housing Starts Jump for Second Month in a Row
The housing market is (slowly) gaining momentum, which is largely being driven by robust economic data in...
END_OF_DOCUMENT_TOKEN_TO_BE_REPLACED