Existing home sales continued to improve, shrinking inventory and making way for additional new construction (see Pete Stewart's Housing Market Improves). Existing home sales gained 2.1% month over month and 10.9% year over year (Table 2). Months of inventory fell to 5.4 months, a 3.6% improvement month over month and a 28.9% improvement year over year. Driven by shrinking inventory, prices of existing homes increased, having gained 11.1% since this time last year (now at $178,600). The Case-Shiller Home Price Index reported broad-based price increases, with the national composite rising 3.6 percent year over year in the 3Q2012 (2.2% over 2Q2011). Average prices are now back to their mid-2003 levels.

Pending home sales show that strong existing home sales will continue: the pending home sales index gained 5.2% and now stands at 104.8, the highest level since March 2007 (minus a few readings during the period when the first-time home buyer credit was artificially influencing the market).

News on the foreclosure front is surprisingly positive. Many analysts believed that we would see a glut of new foreclosures on the market once the market started to recover and that prices would plunge again as a result. It now appears as if this will not happen. Steps taken by banks and the federal government to walk this potential crisis back have apparently been successful. A combination of forgiving debt, modifying payment plans and approving short sales is working: shadow inventory has decreased from 8.8 million homes in 2010 to 5.36 million in November.

The numbers can be found in the tables below: 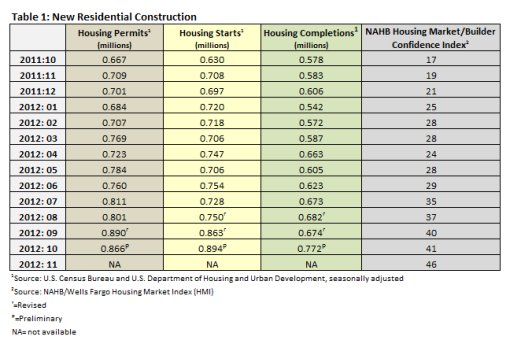 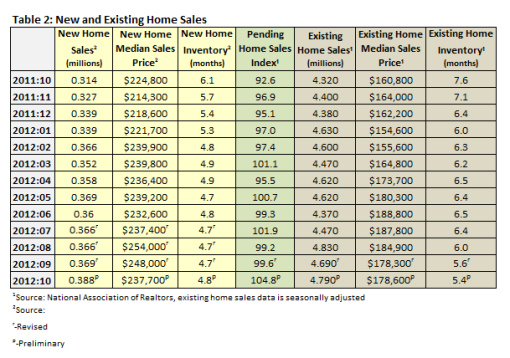 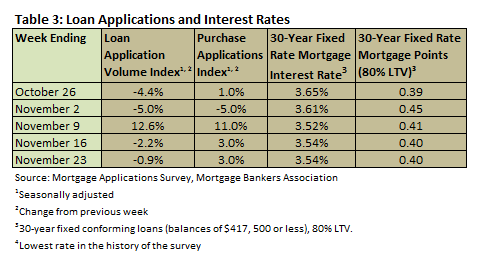 Supply chain
Australia: Demand for New Housing & Lumber Collapses
In March 2020, before the COVID-19 pandemic gripped the global economy, there were 15,386 new dwellings approved in...
END_OF_DOCUMENT_TOKEN_TO_BE_REPLACED

Housing Market
March Housing Starts Freefall in Wake of Pandemic
Not surprisingly, US homebuilding dropped sharply in March as the COVID-19 pandemic continues to wreak havoc on...
END_OF_DOCUMENT_TOKEN_TO_BE_REPLACED