As we ease into the warmer spring temperatures and the peak building season, housing starts data is beginning to equalize on a national level. We typically caution that it is important to remain grounded when monthly data presents us with significant swings, and March’s data is no different. On the heels of February’s improbable surge, housing starts dipped significantly in March as there were signs of a sharp economic slowdown and the US dollar (USD) lost strength.

Building permits decreased in March; privately-owned housing unit permits were at a SAAR of 1,086,000, or 7.7 percent below the revised February rate of 1,177,000. Single-family authorizations were at a rate of 727,000, 1.2 percent below the revised February figure of 736,000. Addressing the decline in permits, Joel Naroff of Naroff Economic Advisors noted, “That is somewhat more worrisome as the permit demand has lagged starts for the last two months,” adding that the low permits number “could signal continued softness in the market.”

As was the case in February, the US Census Bureau report on March housing data confirmed that there were widespread disparities in starts among geographic regions. As noted above, the data will begin to equalize with the advent of spring and a more temperate climate for building on a national level. Seasonally-adjusted housing starts by region for March included:

The National Association of Home Builders’ (NAHB) sentiment index remained unchanged at 58 for the third month in a row. January was the first month since June, 2015 that it dipped below 60. The 30-year fixed mortgage rate ticked up slightly from the February rate of 3.66 to end March at 3.69.

Despite the weak economic data, Millan Mulraine, economist at TD Securities USA said the fundamentals that support a strong housing market, such as steady job growth and low interest rates, are still in place. “We expect building activity to rebound in the coming months as the housing recovery regains its footing following the recent stutters,” he said.

After a brief dip at the end of March, the price of southern yellow pine lumber has skyrocketed during the final weeks of 1Q2016; it finished week 16 at nearly $389/mbf, which is more than 19 percent above its January 2015 starting point of $326/mbf, and 3 percent above its 2015 week 16 price of $377/mbf. Despite the regional disparities in housing starts data, it’s evident that the larger housing segment helped to drive the price of SYP during March and the first half of April.

While the sharp increase could be due to inventory building at the distribution and retail levels in anticipation of spring, the numbers are much stronger and more consistent than they were during the same period last year. With the building season just getting underway in many parts of the country, demand should remain strong in the near-term. 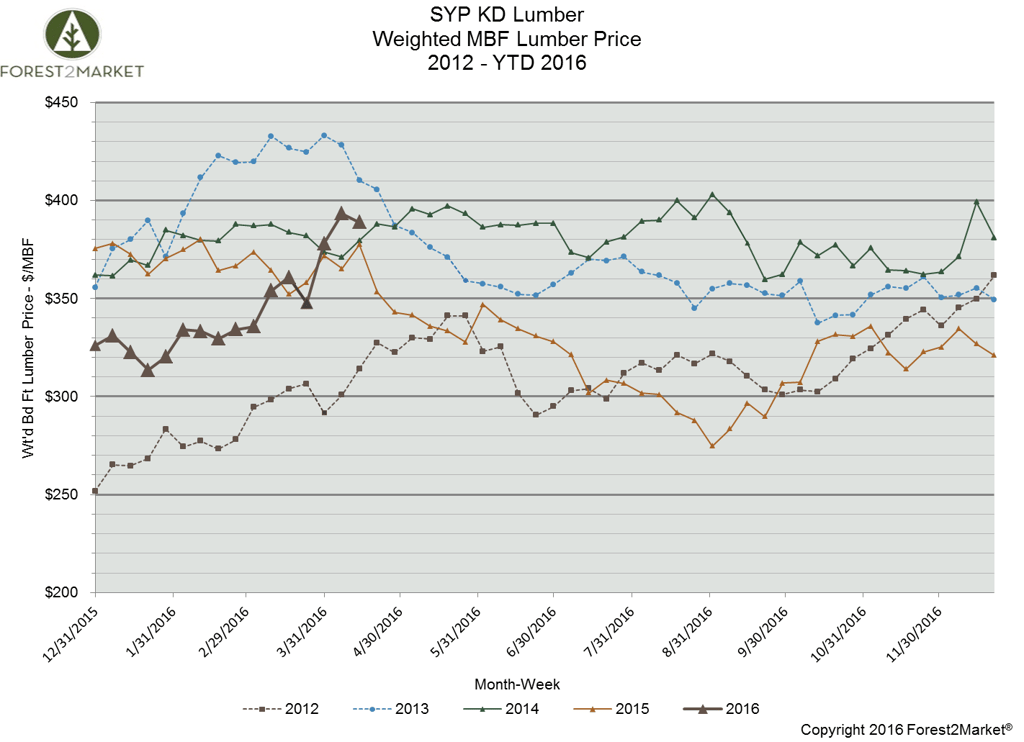 While a number of builders have noted that growth in the housing market has been lackluster over the last year, it has been reliable if nothing else. Bobby Julien, chief executive of The Kolter Group, a real-estate investment firm and builder in Florida, said he has become accustomed to a housing market that is more “in balance.” He noted, “We always want more, but I think the recovery is going to continue like this. A slow, steady pace. That’s a lot better than boom and bust, because it’s very hard to manage your business on those ups and downs.”

Timber Prices
Where are Southern Timber Prices Headed?
The modern forest supply chain is without guidance for operating in the current pandemic-driven economic...
END_OF_DOCUMENT_TOKEN_TO_BE_REPLACED

Supply chain
Australia: Demand for New Housing & Lumber Collapses
In March 2020, before the COVID-19 pandemic gripped the global economy, there were 15,386 new dwellings approved in...
END_OF_DOCUMENT_TOKEN_TO_BE_REPLACED

Housing Market
March Housing Starts Freefall in Wake of Pandemic
Not surprisingly, US homebuilding dropped sharply in March as the COVID-19 pandemic continues to wreak havoc on...
END_OF_DOCUMENT_TOKEN_TO_BE_REPLACED