While low mortgage rates and record low unemployment have buoyed the housing market in recent months, housing starts are still struggling to get into positive territory for the year. YTD starts are down 0.6 percent compared to 2018 despite posting moderate gains in October, but new housing authorizations suggest growth could be around the corner.

Privately-owned housing authorizations increased 5.0 percent to a rate of 1.461 million units in October to their highest level since May 2007. Authorizations are up 15% over the last five months alone. Single-family authorizations were up 3.2 percent at a pace of 909,000 units. Privately-owned housing completions were up 10.3 percent to a SAAR of 1.256 million units. Per the US Census Bureau Report, seasonally-adjusted total housing starts by region included: 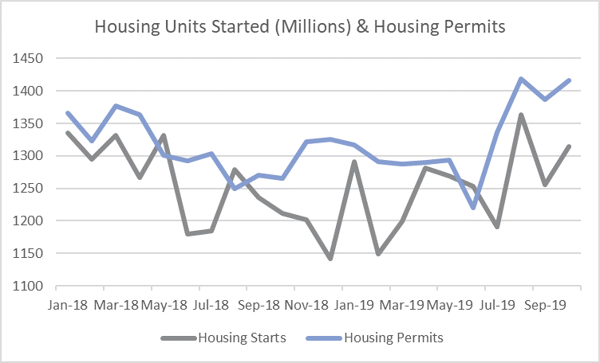 “The continued growth in single-family home building, and permits for future construction, should make consumers who are considering buying confident that they will have a solid choice of homes,” said Bill Banfield, Executive Vice President of Capital Markets at Quicken Loans. “This is an important report for future homebuyers since one of the largest deterrents to entering the market right now is the lack of robust housing options.”

Home builder confidence dipped by a single point in mid-November to 70, per the National Association of Home Builders’ (NAHB) index. The 30-year fixed mortgage rate rose in October, jumping to 3.69 percent for the month. This is significant, as it marks the first rate increase in 11 months.

As we noted in the most recent issue of the Economic Outlook, one topic that warrants monitoring is the rise of so-called non-qualified mortgages (non-QM), and the bundling of bonds containing those mortgages. As the name implies, non-QMs are home loans made to individuals who do not qualify for traditional mortgages. Although a fraction of the size that subprime was before the housing bust—and an even smaller proportion of the total mortgage market—non-QMs are growing exponentially; more than $18 billion worth of these loans have been bundled into bonds this year and then sold to investors, a 44% increase from 2018 and the most for any year since the securities were introduced.

Ironically, the surge in issuance of non-QM bonds coincides with initial indications of delinquency rates on the underlying loans—between 3% and 5%, compared to 0.7% on typical Fannie Mae mortgages. Nonetheless, investment bank Barclays is confident only the riskiest, lowest-rated portions of most non-QM bonds would lose money in a downturn comparable to the financial crisis, when home prices contracted around 34% between 2006 and 2012.

The jump in October permits—which are often used to loosely forecast future demand—is significant, as it represents the fastest rate of authorizations on record since 2007. MarketWatch noted that, “The uptick in optimism among builders can be attributed to multiple factors. Mortgage rates remain low, which is helping prospective home buyers rationalize the cost of purchasing a property. Meanwhile, concerns related to the state of the domestic economy and the trade war between the U.S. and China have eased in recent weeks.

“If home construction activity resumes in earnest in the months ahead, that could boost consumers’ purchasing power in the housing market. Home prices remain at or near all-time highs across much of the country, thanks in large part to a lack of home available for sale. An uptick in the number of homes on the market due to increased building activity could help to ease the affordability issues many buyers currently face.”

Supply chain
Australia: Demand for New Housing & Lumber Collapses
In March 2020, before the COVID-19 pandemic gripped the global economy, there were 15,386 new dwellings approved in...
END_OF_DOCUMENT_TOKEN_TO_BE_REPLACED

Housing Market
March Housing Starts Freefall in Wake of Pandemic
Not surprisingly, US homebuilding dropped sharply in March as the COVID-19 pandemic continues to wreak havoc on...
END_OF_DOCUMENT_TOKEN_TO_BE_REPLACED