Just as quickly as housing starts took a nose dive in October, they reversed course in November to post respectable gains as we approach the end of 2015 and what has been a tumultuous housing ride. We’ll have to wait on December data (published next month) to see how the yearly performance looks, but the metric is on course to hit its 1.1 million unit forecast despite some slip-ups during Q2 and Q3. This number would be the highest level of starts posted since 2007, and up from 1 million units overall in 2014.

Demand may be improving incrementally, but it is worth noting that the US Census Bureau data was accumulated and published prior to the Fed raising the range of its benchmark interest rate by a quarter of a percentage point to between 0.25 percent and 0.50 percent. "The Committee judges that there has been considerable improvement in labor market conditions this year, and it is reasonably confident that inflation will rise over the medium term to its 2 percent objective," the Fed noted in its policy statement.

Will a fractional hike (more symbolic than representative of real economic strength) put a damper on the larger housing sector in the near-term? It’s doubtful. Inventories remain tight and borrowing costs remain low; the average 30-year mortgage rate was 3.94 percent for the month of November. As we noted last month, that figure is in line with the 3.83 percent average for 2015, as the rate has only crested 4 percent once all year (July).

"Homebuilders are making progress addressing the shortage of newer vintage single-family homes we see in many markets, especially affordable housing products with a price of under $200,000," stated Tian Liu, chief economist at Genworth Mortgage Insurance in North Carolina.

Also as we noted last month, Forest2Market’s index for kiln-dried SYP lumber has trended up in recent weeks; from a yearly low in mid-September of $275/mbf, the index finished the second week of December at $325/mbf, which represents an 18 percent increase. 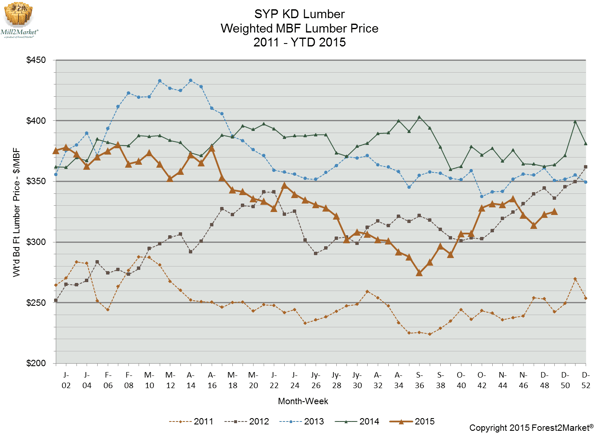 November’s housing starts are good news for a segment that continues to be one of the few growth areas in the larger economy. As noted above, we’ll have to wait until next month to see the full results for 2015; we’ll also be waiting to see how the already-fragile economic environment responds to the Fed rate hike in Q12016.

Supply chain
Australia: Demand for New Housing & Lumber Collapses
In March 2020, before the COVID-19 pandemic gripped the global economy, there were 15,386 new dwellings approved in...
END_OF_DOCUMENT_TOKEN_TO_BE_REPLACED

Housing Market
March Housing Starts Freefall in Wake of Pandemic
Not surprisingly, US homebuilding dropped sharply in March as the COVID-19 pandemic continues to wreak havoc on...
END_OF_DOCUMENT_TOKEN_TO_BE_REPLACED