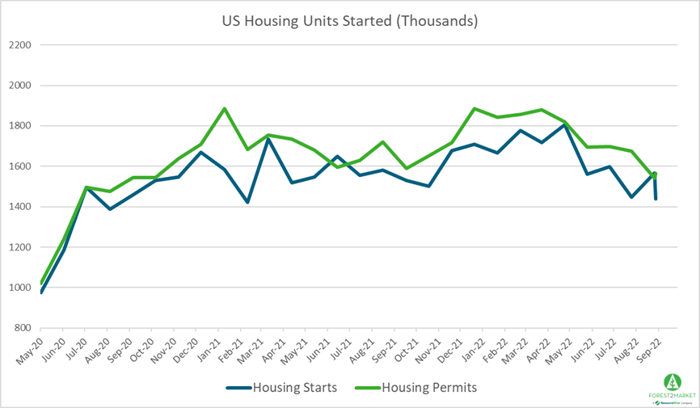 Our most recent issue of the Economic Outlook notes that, in terms of the impact of mortgage rates on affordability, “this year and last year might as well be in different decades,” wrote Slate’s Henry Grabar. “Nationally, the monthly mortgage payment on the median-price U.S. home has doubled in just two-and-a-half years. It’s the most severe affordability shock on record, writes David Doyle, head of economics at Macquarie. ‘So if you want to spend $2,500 a month, you can now buy a house that costs $476,425,’ Bloomberg’s Joe Weisenthal observes. ‘For that same monthly payment, you could have purchased a $758,572 house in early 2021.’”

These conditions create a dilemma for the Fed because, as UBS noted, the decline of the U.S. housing market is simultaneously disinflationary and inflationary. “It lowers demand for building materials and associated durable goods, but people still have to live somewhere,” they observed. “If people are not buying houses, but are determined to move out of their parents’ basements, this means higher rents and more upward pressure on the [mythical] owners’ equivalent rent measure.”

Longer-term prospects for single-family home construction are brighter, according to the Kansas City Fed’s Jordan Rappaport. He argues that years of under-building, which has left a housing deficit of at least 1 million homes, coupled with a shift to hybrid work models and commuting mean an expansion for single-family construction is coming after the current downturn—eventually rising to a long-term annual rate of 1.4 million units. If single-family starts continue comprising approximately 70% of total starts, Rappaport’s forecast would translate to roughly 2 million total starts.

While concurring demographic fundamentals support this outlook, economic headwinds are likely to keep starts well below that level in the near term.

Lumber Prices
Southern Lumber Prices Continue to Inch Down
After jumping 12% in August due in large part to strong demand from the multi-family construction sector, US housing...
END_OF_DOCUMENT_TOKEN_TO_BE_REPLACED

Lumber Prices
SYP Lumber Prices Stabilize; Is More Volatility Around the Corner?
By late June, the price for finished southern yellow pine (SYP) lumber had tumbled 59% from its 2022 high mark of...
END_OF_DOCUMENT_TOKEN_TO_BE_REPLACED

Housing Market
Housing Starts Tumble to Lowest Level in 17 Months
After a disappointing May and June, US housing starts continued to lose momentum in July as the housing market cools...
END_OF_DOCUMENT_TOKEN_TO_BE_REPLACED