Perhaps due to the abnormally mild temperatures throughout much of the country, February housing starts reversed course from January’s temporary slump to post impressive gains vs. the same period last year. While it’s important to remain grounded when monthly data presents us with significant swings, February’s numbers could bode well for construction projects for the remainder of the spring season.

The US Census Bureau report on February housing data confirmed that there were widespread disparities in starts among geographic regions; the obvious lull in the Northeast was due in part to the harsh winter weather. Seasonally-adjusted housing starts by region included:

The National Association of Home Builders’ (NAHB) sentiment index remained unchanged at 58 for the month of February. This was the second month in a row that the index was below 60; January was the first month since June, 2015 that it dipped below this level.

The 30-year fixed mortgage rate dropped significantly from the January rate of 3.85 to end February at 3.66. This marks the lowest the fixed rate has been since May, 2013 (3.54). What does this mean for housing starts, lumber prices and larger macroeconomic conditions for the housing sector?

After some initial zigzagging, the price of southern yellow pine lumber has trended up during 1Q2016; it finished week 12 at nearly $361/mbf, which is nearly 11 percent above its January 2015 starting point of $326/mbf. Based on this data, it’s evident that housing starts helped to buoy the price of SYP during February. 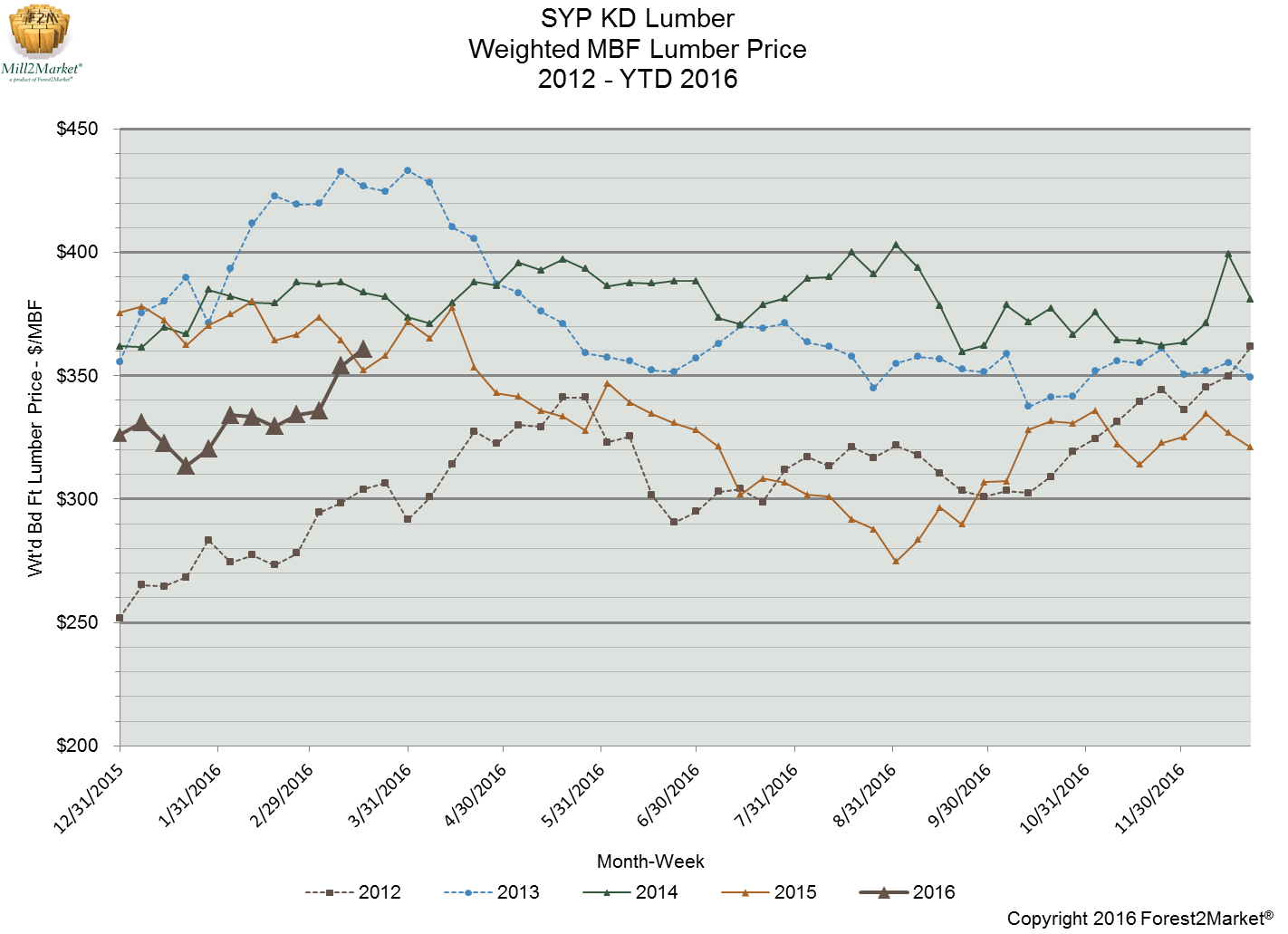 On the other hand, existing home sales for February were disappointing: The National Association of Realtors wrote yesterday that existing home sales dropped 7.1 percent to an annual rate of 5.08 million units, the lowest level since November, 2015. This is a potentially troubling sign for America's economy, which has otherwise looked somewhat robust thanks to steady housing numbers.

A recent Reuters piece noted that, “Housing continues to be supported by a tightening labor market, which is starting to push up wage growth, boosting household formation. But a relative dearth of properties available for sale remains a challenge. In February, the number of unsold homes on the market rose 3.3 percent from January to 1.88 million units, but was down 1.1 percent from a year ago.  At February's sales pace, it would take 4.4 months to clear the stock of houses on the market, up from 4.0 months in January. A six-month supply is viewed as a healthy balance between supply and demand.”

There has also been much conjecture about the possibility of a coming negative interest rate policy (NIRP) from the Federal Reserve, which would have a slew of undesirable effects on housing and the larger economy.

“There are plenty of other negative potential short-term impacts of NIRP — a TV commercial advertising it would likely be forced to disclose more side-effects than the drug commercials during the evening news,” wrote David Kelly of JP Morgan. “However, there is also an insidious and dangerous long-term effect. Maintaining artificially low or even negative interest rates tends to boost asset prices, particularly home prices. However, if and when the economy recovers from its slumber and inflation begins to rise again, any tightening of monetary policy could easily induce a crash in those overpriced assets. Not only is the drug ineffective with plenty of nasty side effects, but the withdrawal symptoms could be very severe.”

A NIRP environment or shallow recession later in the year would certainly drag mortgage rates even lower, although such an environment would also dampen home-buying and home-building enthusiasm. For the time being, homeowners and housing sector watchers can remain cautiously optimistic about the near-term.

But, as David Kelly also noted, “However, at some time in the future, when the economy has faltered and central banks again feel the urge to ply the economy with monetary medicine, investors will need to factor in the risk that the Fed could experiment with NIRP here and the reality that it would likely prolong economic weakness rather than curtail it. When that time comes, we can only hope that, in the words of the late Nancy Reagan, the Fed ‘just says no’.”

Timber Prices
Where are Southern Timber Prices Headed?
The modern forest supply chain is without guidance for operating in the current pandemic-driven economic...
END_OF_DOCUMENT_TOKEN_TO_BE_REPLACED

Supply chain
Australia: Demand for New Housing & Lumber Collapses
In March 2020, before the COVID-19 pandemic gripped the global economy, there were 15,386 new dwellings approved in...
END_OF_DOCUMENT_TOKEN_TO_BE_REPLACED

Housing Market
March Housing Starts Freefall in Wake of Pandemic
Not surprisingly, US homebuilding dropped sharply in March as the COVID-19 pandemic continues to wreak havoc on...
END_OF_DOCUMENT_TOKEN_TO_BE_REPLACED